The government’s changes to private health insurance have little, if anything, to do with health policy. Rather they are about staving off the insurers’ death spiral of rising premiums and desertion of profitable customers, and protecting the government from the embarrassment of yet another five or six per cent rise in premiums in 2018.

The most striking aspect of Minister Hunt’s announcement of the Commonwealth’s “reforms” to private health insurance is that he makes no mention of the usual Coalition line that PHI, through supporting private hospitals, takes pressure off the public system.

With the persistence of long public hospital queues for elective procedures it’s become hard for the government to maintain that line, particularly when evidence shows that all the $11 billion annual subsidy for PHI has done is to push up health care prices and entice specialists away from the public sector, thus worsening public hospitals’ waiting times.

The Coalition cannot bring itself to recognise that PHI is a high-cost financial intermediary that contributes little, if anything, to health outcomes and is probably re-allocating scarce resources away from their most effective use.

The latest changes, therefore, are simply about supporting PHI, as if that’s a worthwhile policy end in itself. They are directed to the industry’s problems of rising premiums, stagnant membership, and loss of profitable members, particularly the young.

Ever since the Howard Government re-introduced support for PHI, premiums have been rising far in excess of inflation, as shown in the graph below, covering the last ten years.

In times of rising incomes these rises did not deter people from taking up PHI, particularly when there have been such powerful financial incentives, most notably exemption of high-income earners (above $90 000) from the Medicare Levy Surcharge (MLS) if they hold PHI hospital cover.

But over the last two years incomes have not been rising, and people have been reviewing discretionary spending. Also, as time has gone on many who have made a claim on their insurance policies have had the experience of high co-payments and exclusions, while others have learned that when needs are urgent there is still a good public hospital system to serve their needs. (The Howard Government’s “Run for Cover” campaign that lured so many into PHI had given the impression that without PHI one was left without any health cover.)

Over the last two years membership of PHI (hospital cover) tables) has virtually stagnated, failing to keep up with population growth. In fact over the last twelve months insurers have actually lost members – a blow for an industry that has enjoyed 17 years of growth supported by generous government subsidies.

What’s worse for the insurers is that the age profile of their membership has been shifting, as shown in the graph below. Over the two years to June this year they have gained 150 000 members over 60 years old while losing 100 000 younger members.  (Most of the gain in older membership is because of the ageing of those who already have insurance.) 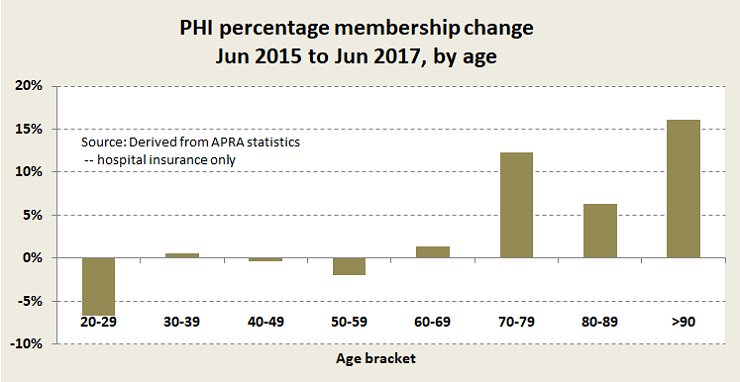 Note in particular the loss of members in their twenties, the years before “Lifetime Health Cover” (LHC) penalties kick in at the age of 30. The government’s changes, offering up to a ten per cent discount for this group, are targeted to attract them back to PHI.

The third graph shows why this is a serious problem for the insurers, because the cost of claims – the green line – rises so steeply with age. The blue line on the graph shows the cost of a typical hospital cover without too many exclusions and with a high excess – the sort of policy one would take if one wanted to use it for its purpose rather than simply as a way to avoid the MLS. 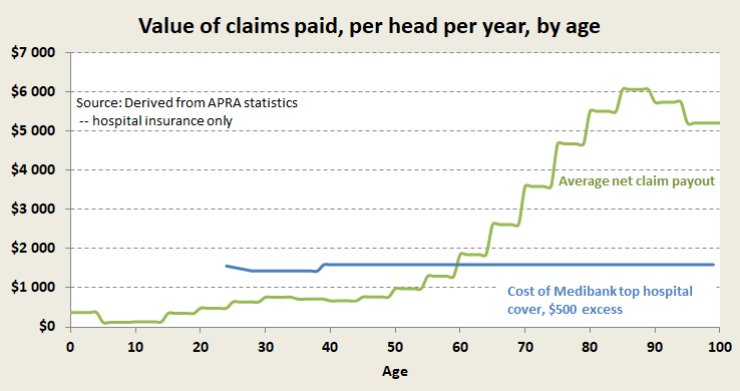 Note the crossover point at age 60, when for such a policy PHI becomes of net benefit for the average customer and unprofitable for the insurer.

The blue line has a couple of kinks, because it models the effect of the new discount as it would apply to someone responding to the Government’s enticement and who takes up PHI at age 25 (the discount cuts out at age 40). That discount still does not make PHI look like an appealing value proposition: there’s still a big gap between premiums and claims paid. It still makes sense, on average, for those who want to use private hospitals, to pay their own hospital bills and to defer taking out PHI until they are in their 50s, even though they would bear a 30 per cent cost penalty under the LHC arrangements.

The likely effect – kicking the problem down the road

It’s doubtful therefore if the discount for the young will have any effect. When the discount was announced the ABC sent a reporter with a roving microphone to talk to young people – who all appeared to be in good health – and none were enticed by the offer. These are the same young people who are paying off high university debt, who are locked out of the housing market, and who, when they do find a job with decent pay, are being taxed to support older Australians’ superannuation and housing investments. Even if they could afford PHI they have no desire to subsidise their elders even further.

Some commentators have complained about the government’s failure to outlaw junk policies – policies that are so loaded with exclusions that they are virtually useless. But in terms of supporting PHI, these are good business, because those who hold them will wisely use public hospitals and will never make a claim. They are mainly a means to avoid the MLS.

Also some have complained about the lifting of the excess limit from $500 to $750, but it has been at $500 for 17 years, and the 50 per cent increase is still lower than inflation over that period. These changes should be seen in the context of helping arrest the insurers’ death spiral, rather than helping consumers become better served by PHI.

The new requirement for insurers to improve their disclosure, and to provide some ranking of policies, is simply in line with standard consumer law, and is long overdue.

Increased coverage of mental health may or may not be of some benefit to consumers. If, as has happened with routine surgery, it entices mental health professionals to desert the public system it could have a net deleterious effect.

The change that may result in some price reduction is the deal to lower the cost of prostheses. The failure of insurers to control these costs illustrates the general point so many health economists have made: private insurers lack the capacity to control service providers’ costs, utilisation or profits.

The prostheses initiative may have a once-effect next year, when, combined with low general inflation, the PHI increase will probably come in below five percent – a superficially good figure before an election. But don’t expect the government to tackle the bigger problems of insurers’ high profit margins (even the AMA is complaining about that), private hospitals fees and medical specialists’ fees (about which the AMA is unsurprisingly not complaining).

The problem the government is avoiding is how to get PHI out of health funding, and how to develop a sustainable funding model for private hospitals, preferably by integrating their funding with the funding arrangements for public hospitals.

Unfortunately there is a populist belief, fuelled by the insurers, that something needs to be done about PHI premiums, while there is insufficient realisation that PHI is an intrinsically high-cost, inefficient and inequitable way to fund health care.

There was a time when Labor had the political courage to take on PHI, but (contrary to the Minister’s assertion that “ Labor hates private health insurance”) Labor is even more committed to supporting it than the Coalition.

Those who understand the economics of health care therefore must put much more pressure on all politicians to stop wasting money and to let this industry die a natural death.

Ian McAuley is one of many who have written on private health insurance for Pearls and Irritations. John Menadue himself has been a consistent critic of public subsidies for PHI. Other contributors include Jennifer Doggett, Stephen Duckett, John Dwyer, Sophie Lewis, Lesley Russell, Peter Sainsbury, John Thompson, Leanne Wells and Karen Willis.