If crime is falling, why is imprisonment rising?

The Australian prison population has doubled since 2000 and recidivism is at 55%. Yet almost all categories of crime have fallen in the past decade. Why do we spend $3.6 billion a year (and rising) on a system across Australia that is clearly not serving us well or making us safer? There are alternatives available, as the Justice Reform Initiative [JRI] explains.

The Justice Reform Initiative [JRI] is developing a national conversation about the ineffectiveness of our reliance upon imprisonment as a means of combatting crime. It has a most impressive list of patrons, with two former Governors-General of Australia, Dame Quentin Bryce and Sir William Deane, as the joint Patrons-in-Chief. They include people from all parts of the law and associated agencies, from all shades of politics, from academe and community agencies, corrections, from all states and territories. They include former judges, prosecutors, police, respected Aboriginal leaders and former ministers from both sides of politics – many of who have witnessed how the overuse of jail leads to worse outcomes for our society, not better. They are committed to driving the conversation and hope that you, the electors, will take notice, become involved and move your elected representatives to action. (The Justice Reform Initiative website will be operational in the near future.)

JRI is not building an organisation to compete with the great work already being done in Australia by a wide range of agencies committed to correcting our drift into imprisonment as a cure-all and to making our communities safer from recidivists. The objectives include:

supporting the leadership role of Indigenous led organisations, including Change the Record, and working in partnership with them to reduce the vastly disproportionate rate of incarceration of Aboriginal and Torres Strait Islander people.

But the disgraceful over-incarceration of First Nations people and the refusal of governments to take recommended action to address it is only a part of the JRI story. It seeks to bring all interested parties together, across the country, capitalising on all the work being done by many bodies to develop a general conversation about implementing alternatives for all people. It is early days, but you will hear more about us. And then the politicians will hear from you, too.

Let’s get some statistics out of the way.

The Australian prison population grew from 30,000 to 43,000 in the 8 years to 2019 (doubling since 2000). Over one third of those prisoners are unsentenced (i.e. untried, on remand, bail refused), an increase of 122% in the same 8 years – and 12.8% of those stay in custody for a year or longer. Women comprise the fastest growing cohort, at 8% of the total now. First Nations people (adults comprising 3% of the national adult population and juveniles 5% of the juvenile population) comprise 30% of the adult and 59% of the juvenile prison populations. Prisons cost the country $3.6 billion per annum. 73% of prison entrants have been in adult prison before, 32% on five or more occasions. 90% of juveniles in detention graduate to prison after turning 18. A majority of prisoners suffer mental health and/or cognitive disabilities. Of comparable OECD countries, Australia has the third highest per capita imprisonment rate, after the USA and New Zealand. Many of those are serving short sentences of six months or less. Our total adult imprisonment rate is 223 per 100,000, but for First Nations adults the figure is 2,606 per 100,000.

In its latest quarterly update (to June 2020) on NSW recorded crime statistics, the NSW Bureau of Crime Statistics and Research reported:

“Crime across most of NSW has remained stable or fallen in the two years to June 2020. The only major exception to this is sexual assault which rose 9.4% year-on-year to June 2020. A similar upward trend was reported in the previous quarterly report.

“Four offences have trended down over the last 24 months. The remaining 12 offences were stable. The offences trending down were:

That shows a continuation of trends that have been reported for many years and with broad similarities in other states and territories.  Andrew Leigh MP calls this our second convict age.

The statistics do not provide us with answers, but they do prompt the question “why?” – if crime is falling, why is imprisonment rising? Given that recidivism (prisoners returning to corrective services within two years) is so high, why is rehabilitation/reform not successful? Why are an increasing number of women going to prison? Why are so many First Nations people in prison? There are answers to all those questions that enable us to point to a better way ahead and JRI will be pursuing them.

“Jailing is Failing” is the catchline of JRI, launched in September 2020. Prisons are still needed, but not for the numbers or types of people presently occupying them. Prisons are failing prisoners, victims, women, First Nations people, people with mental illness or cognitive impairment, juveniles and taxpayers. They do not deter and they do not rehabilitate.

BACK TO THOSE QUESTIONS

– Why is imprisonment rising? The number of prisoners on remand (bail refused) has risen dramatically in the last five years. Changes to bail laws (especially in NSW) have made it unreasonably difficult to “get bail” in many circumstances. Many of those refused bail will not be convicted of any crime and more will not receive prison sentences upon conviction. The disruption to their lives (family relations, housing, employment, education, social lives) and the lives of others is severe.

Police practices have changed to show less leniency for minor offences and less inclination to employ diversionary processes. Interventions in the lives of members of marginalised communities have increased. This directs more people into prison.

Sentencing laws have also, in many jurisdictions, required courts to exercise their discretion in favour of custodial sentences for some offences for which community-based outcomes would be sufficient and may be more effective in terms of crime prevention.

– Why is recidivism so high? Many prisoners suffer mental health problems and cognitive impairments. Many suffer addictions to drugs and alcohol. In prison and upon release, they are not receiving adequate attention for these conditions.

Not enough resources are provided for rehabilitation/reform programs in prison or for follow-up assistance on release (housing, employment, education, healthcare, addiction treatment, re-establishing social contacts). Crime becomes the easiest way of surviving, using contacts made and skills learned in prison.

– Why does the proportion of women in prison continue to rise? A disproportionate number of them are First Nations peoples. Most are victims of domestic and/or sexual abuse and are in prison for non-violent crimes. Many are victims of social disadvantage and separated from their children, who become secondary victims of the system.

– Why are there so many First Nations people in prison? A disproportionate number of First Nations men, women and young people suffer from inadequate conditions in health, housing, education and employment and from abuse of alcohol and/or drugs that have disadvantaged them personally and socially and led to offending of various types. Those incarcerated while young become habituated to it and embark on the crime treadmill.

Over the past ten years, seven states in the USA have cut crime rates and incarceration, closing prisons and saving huge public expenditure with gains to public safety. We can do it, too.

Furthermore, doing so would align with what the community actually wants to see – rather than the common perception of a ‘lock ‘em up’ mentality. As yet unpublished data from a recent ANU national poll shows high levels of public support for alternatives to prison for a range of offenders:

– 91% were of the view that young offenders should have to take part in programs that teach job skills, moral values and self-esteem

– 70% agreed that non-violent offenders should be given a community-based order.

Justice reinvestment is proven to work. It moves resources from punishment to prevention with the involvement of the community. For example, JustReinvest NSW has a very successful Maranguka program in Bourke, NSW. Crime prevention is not a dream – but resources need to be committed to make it work.

JustReinvest supports JRI, the Justice Reform Initiative, as do many organisations and individuals. We look forward to your contributions to the conversation that needs to be had. 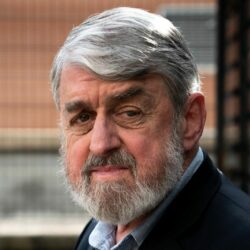 Nicholas Cowdery AO QC is a former Director of Public Prosecutions for NSW who has spent 50 years in criminal justice in various capacities. He is a former President of the International Association of Prosecutors and inaugural Co-Chair of the Human Rights Institute of the International Bar Association. He holds numerous awards for involvement in criminal justice and human rights. He teaches criminal justice courses at universities in Sydney. His latest book (with Rachael Jane Chin) is "Frank & Fearless" (2019, NewSouth). He is a director of Justice Reform Initiative Ltd.