In Asia Media this week: New leaders and testing times in Seoul, Manilla and Hong Kong – and soon, perhaps, in troubled Colombo 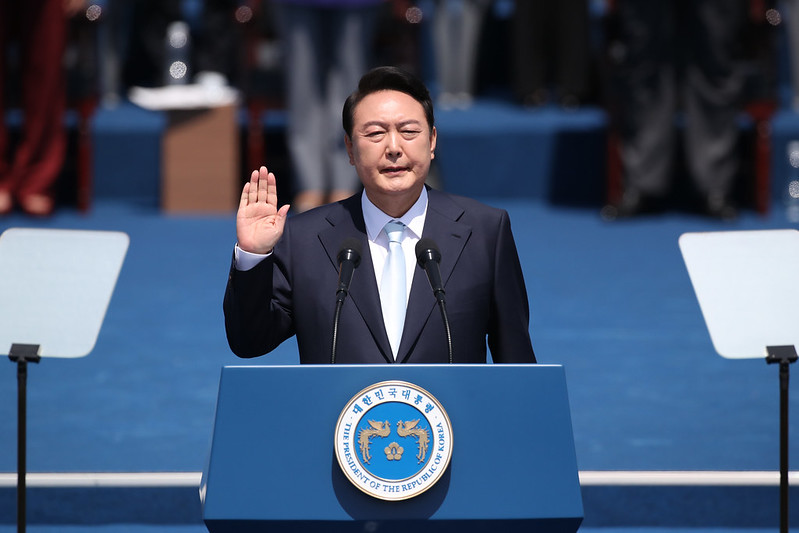 In Asia Media this week: South Korean President Yoon Suk-yeol took office, in Manilla Ferdinand Bongbong Marcos, son of the late ousted corrupt dictator, won the election in a landslide while in Hong Kong John Lee Ka-chiu, a former chief secretary and security minister, was the only candidate – and resignation of the leader in troubled Colombo.

South Korean President Yoon Suk-yeol took office during the week and it is hard to imagine a leader who faces intellectually tougher foreign policy and security tests.

An analysis in The Korea Times, headed  Diplomatic headaches lie ahead for Yoon, sums up the challenges: “An unanswered nuclear threat is just sitting across the border, while a strategic dilemma over the country’s balancing act amid the US-China rivalry will continue to vex the new South Korean Government. Plus, the new administration should find ways to normalize the nation’s frayed ties with Japan.”

Yoon and US President Joe Biden plan to meet in Seoul later this month, as Biden is to attend the next Quad summit, in Tokyo. The summit is scheduled for May 24 but the precise timing might depend on the result of the Australian national election.

The Korea Herald says North Korea will be at the top of the agenda for the meeting, as far as Yoon is concerned. “Forming economic alliances and ties to contain China will also be high on the list for the US,” an article in the paper says. The Herald notes Yoon stressed strengthening Seoul-Washington links in his election campaign.

A comment piece in the Times, written by former foreign minister Yun Byung-se, says the relatively good old days are gone. “We are already deeply into a fragmented and transformed world, with globalization waning and no end to the geopolitical and geo-economic confrontations in sight,” Yun writes.

He notes that the Korea-US alliance is vital to the US grand strategy for international order.

The Times reports that Chinese President Xi Jinping has invited Yoon to visit China. The invitation was extended by Chinese Vice President Wang Qishan, during a meeting with Yoon on Tuesday. “Strengthening Beijing-Seoul ties amid the current difficulties the world is facing is increasingly important,” Wang is quoted as saying.

China Daily puts the meeting in a favourable light. “China and the Republic of Korea have vowed to further advance their cooperative partnership and to strengthen their communication and coordination on the Korean Peninsula issue in order to denuclearize the peninsula and promote its lasting peace and security,” the paper says.

‘People power’ reversed as Bongbong wins in a canter

Voters in the Philippines have reversed the “people power” judgment of 1986, electing Ferdinand Bongbong Marcos, son of the late ousted corrupt dictator, in a landslide.

Inquirer.net, the website of the Philippine Daily Inquirer, reported on Thursday that Marcos had received more than 31 million votes, with his main rival Leni Robredo lagging badly on 14.8 million.

The election sparked competition between the US and China for the chance to forge closer ties with the Philippines. Under outgoing president Rodrigo Duterte, the country had tilted towards China, despite antagonism over China’s claims to islands in the South China Sea.

The website reported US President Joe Biden had called Marcos on Wednesday, US time. It quoted the White House as saying: “President Biden underscored that he looks forward to working with the President-elect to continue strengthening the U.S.-Philippine Alliance.”

China Daily reported Chinese President Xi Jinping had sent a congratulatory message to Marcos. “Xi stressed that both China and the Philippines are at a critical stage of development and their relations face important opportunities and enjoy broad prospects,” the paper said.

South China Morning Post said Marcos was expected to tread a careful line between China and the US. Observers said Marcos might move closer to the US as a treaty ally but would be unlikely to join the US in countering China.

The paper also reported experts as saying the Marcos victory was a sign of democratic regression in South East Asia – a region that had experienced a widespread decline in democratic norms.

Ucanews.com, the Catholic news service, said clergy in the Philippines, a largely Catholic country, had expressed despair over the election result. “Many within the Church had publicly backed Robredo as Marcos was seen as a throwback to the martial law years when his father suppressed, tortured and murdered opponents, while plundering the country,” the website said.

Hong Kong gets new leader – and nothing changes

Here’s how easy it is to organise an election when the government controls the whole process.

Security was tight: many more police than voters – 7000 officers – were deployed at the election venue.

The G7 grouping of democratic countries criticised the selection process as being part of a continuing assault on fundamental freedoms in Hong Kong, the paper said.

The EU also attacked the poll. “The European Union regrets this violation of democratic principles and political pluralism and sees this selection process as yet another step in the dismantling of the ‘one country, two systems’ principle,” top EU diplomat Josep Borrell said.

But China’s mission to the EU said Borrell’s statement had smeared Hong Kong’s election. “The chief executive election was held in a lawful, fair and orderly manner,” the Chinese reply said.

Before the week was out China sent a stern message: nothing has changed. National security police arrested retired Catholic leader Cardinal Joseph Zen Ze-kiun, 90, along with former legislator Margaret Ng Ngoi-Yee and singer Denise Ho Wan-sze, trustees of a now-defunct fund set up to help activists involved in the 2019 political protests.

SCMP said the arrests sparked concerns that a wider net would be cast against religious institutions with foreign ties. The Vatican, the US and EU governments condemned the detentions.

One – Luke de Pulford of the anti-slavery organisation Arise – called on the Vatican to break its silence about Beijing’s actions in Hong Kong. “Just so sad,” he tweeted. “Will the arrest of Cardinal Zen – a great man – be enough to get Pope Francis to break his silence on the assault against Hong Kong’s freedoms?

Sri Lanka’s political and economic crisis has led to the resignation of the country’s former prime minister Mahinda Rajapaksa and, far more importantly, the loss of nine lives.

Various papers, including The Hindu and Sri Lanka’s The Island reported an

address to the nation by President Gotabaya Rajapaksa. He said he would appoint a new prime minister and cabinet soon.

The Daily Mirror reported the new prime minister was likely to be opposition MP Ranil Wickremesinghe of the United National Party. Wickremesinghe and the president had held closed-door discussions on Thursday evening, the paper said.

The Hindu’s Colombo reporter Meera Srinivasan said Wickremesinghe is the sole UNP member in Parliament. He would need backing from the ruling and opposition parties to command a majority in the 225-member legislature.

Mr Wickremesinghe was considering his options.