In Indonesia the past is another country 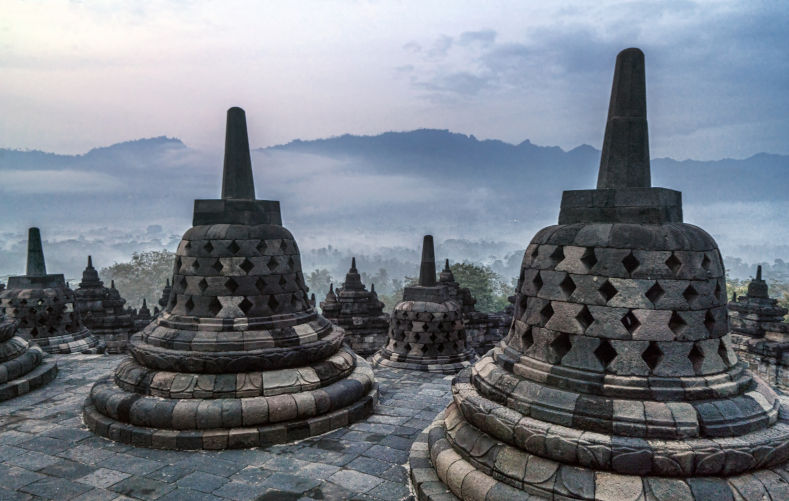 Buddhist complex Borobudur, not the earliest but now one of the world’s great wonders. Image: Wikimedia Commons

Nationalism in the world’s fourth largest nation is rising – but so far unthreatening. Indonesian passions are being driven not by demagoguery but through discovery of the country’s pre-colonial, pre-Islam heritage with added ghosts.

Java is one of the world’s most culturally rich islands, but its ancient history has been smothered by modern politics. Generations were taught everything started in 1945 when Indonesia declared itself a republic after centuries of Dutch rule.

That’s changing, helped by the discovery of several Candi Misterius releasing a surge of wonder at the skills of the nation’s ancestors and pride in their achievements.

The early kingdoms, and particularly the 14th century Majapahit, are becoming the foundations for Indonesian nationalism according to Indonesian historian Dr Wayan Jarrah Sastrawan:

‘The generation of politicians who led the country’s independence movements were concerned to find a historical basis for a united Indonesian nation.

‘Faced with the diversity of languages, customs and religions in the archipelago leaders … turned to the pre-modern past to find powerful states (as) precursors of modern Indonesia.’ They chose Majapahit.

The palm-leaf manuscript Nagarakretagama, written in 1365 and now on UNESCO’s Memory of the World Index, claims Majapahit had 98 tributary states. These ran from Sumatra in the west to New Guinea and included Indonesia, Singapore, Malaysia, Brunei, southern Thailand and the Philippines’ Sulu Archipelago.

Its authority may have been enhanced as the MS was also a PR booster, but most historians seem to agree that the empire was a powerful military force and wide-ranging trader. Fears this discovery could lead to an outbreak of Putin-style belligerence are unlikely under the present leadership.

There are hundreds of historical sites across Indonesia from the ninth-century Buddhist complex Borobudur, not the earliest but now one of the world’s great wonders, to the recent discovery of ‘mystery temples’ plus phantoms.

The best indicator of a special spot has long been a footnote in a Dutch academic journal from colonial times. On the ground, a rusting barbed-wire fence and weathered sign warning of fines facing thieves. With luck, a local elder might remember a track through the jungle leading to a few crumbling rock piles and little else.

Though not at Srigading, an East Java hamlet where even wee kids know the Candi (temple). They no longer call it Cegumuk a toss-away name for a hump in the middle of a flat field of dense sugarcane.

Now it’s the site of a government excavation that’s already yielded artefacts from a thousand years ago, Java’s golden age. Literally, for the top of an urn made from the yellow metal has already been discovered.

So there’s a ban on detectors and a yellow plastic POLICE LINE tape wrapped around the base of what’s most likely a temple from the late Mataram period. This Hindu–Buddhist kingdom ruled much of Central and East Java between the 8th and 11th centuries.

This is the theory of archaeologist and dig supervisor Wicaksono Dwi Nugroho: ‘We only knew of this site this year after a villager told a local businessman who’s helping fund the excavation.’

Labourers collect Rp 150,000 (AUD 15) a day, three times the wage for sweating in the fields. Finders of goodies get a small reward, a reversal of the old policy of threats.

‘Under the topsoil was a large linga and yoni carved from a rock which isn’t found around here,’ said Nugroho. He thinks the red-brick temple probably stood 11 metres high and covered a ten by ten-metre base.

‘Moving the yoni aside revealed a shaft about three by three metres. So far we’ve retrieved three statues, some clay pots and a broken ceramic plate which was probably traded from China.’

A yoni represents the goddess Shakti, the linga its masculine counterpart. The Encyclopaedia of Hinduism defines the icons as ‘the union of the feminine and the masculine that recreates all of existence.’ Although Srigading is largely Muslim, the yoni has been sprinkled with blossom and wrapped in white cloth.

Opening the mound has led to supernatural sightings. Locals told one reporter of ‘strange events’ near the temple and a ‘large black man towering up to more than two meters … sitting cross-legged on the rock ‘like a ‘guardian’.

The Hindu kingdoms collapsed in the 16th century. The reasons are contested – the spread of Islam, breakups in the ruling families, power shifts or volcanic eruptions. The survivors fled east and mainly settled in Bali which remains Indonesia’s only Hindu province.

For much of the 350 years of colonialism, the Dutch were more interested in guilder than curiosities. But between 1811 and 1814 Thomas Stamford Raffles was the Lieutenant-Governor of Java following the Napoleonic Wars.

A refined Englishman who spoke Malay, Raffles was bewitched by the traditions and masterpieces of architecture and engineering the Dutch had ignored. In 1817 he wrote The History of Java, describing the story of the island from ancient times plus its mores, arts, beliefs, geography, flora, and fauna. It’s available online.

In 1901 the Dutch launched their Ethische Politiek policy, educating selected locals and developing infrastructure. Historians sought and recorded sites and shipped statues to Leiden where many still await repatriation. All crashed with the 1942 Japanese invasion. After the 1945 declaration of independence preservation of the new nation was more important than conserving history.

Now a younger generation is recognising the earlier centuries of their country and venerating pre-colonial heroes, like Majapahit era prime minister Gajah Mada (1290-1364). One of the nation’s most prestigious universities carries his name.

The Alliance of Women Journalists co-opted the 13th century Queen Ken Dedes to celebrate this year’s International Women’s Day at the Singosari Museum. Displays tell the adventures of the legendary Prince (Raden) Panji which have inspired a wealth of dance, poetry, music and drama worthy of Shakespeare.

There’s no independent research to back this personal observation, but there’s growing pride in the nation’s past. The Majapahit story and Panji characters are getting onto bookshelves and street art, elbowing aside the Disney culture that’s long colonised Indonesia.