Much has already been written about the inspiring life of Hal Wootten who passed away on July 27 at the age of 98. I do not want to recount all his achievements here but only recall my brief but brilliant encounters with Hal and his enormous contribution to understand and support the Palestinian cause.

I first met Hal on 7 July 2007. The date sticks because it was during a tea break at one of the first academic conferences at which I was invited to present a paper. It was a conference celebrating the life and works of the late international law jurist Professor Julius Stone. The conference was held on the centenary of his birth and hosted at Sydney University’s old Phillip St. campus. Professor Stone, a former professor at Sydney University, was an ardent proponent of universalist values and also a strong supporter of Israel. My modest conference paper set out to better understand and reconcile Professor Stone’s motivations. (paper here, for those interested).

Hal approached me after the talk and, as I have now learned is common of Hal’s approach, he cut straight to the chase. He asked me why my paper did not engage more with Stone’s legal arguments. Not wanting to sound like I didn’t know the intricacies of Stone’s technical legal arguments (which I largely didn’t given to the fact that international law was and is not my area), I foolishly replied ‘Professor Stone’s international law arguments are just so rigorous, it’s hard to pick them apart’ to which Hal immediately replied ‘Ben, didn’t seem to have a problem doing it’ – referring to my co-presenter in that session Professor Ben Saul who skillfully engaged with Professor Stone’s work on its merits and picked apart the legal arguments just fine.

Hal continued to quiz me about the Palestinian community in Australia and my own background. I made it clear that I was more from Western Sydney than I was from the West Bank – but happy to indulge his interest. I asked his name and he replied ‘My name is Hal Wootten, I set up a law school not far from here a while back’.

Shortly after that meeting, later in 2007, Hal went to Ram’allah (I believe he also made it to Gaza eventually – if not on that trip, then a subsequent one) to learn more about the situation in Palestine. He met people on both sides of the conflict and earned respect from all. At 85 years old, during a protest at the famous Al-Manara Roundabout in Ram’allah, Hal was arrested with a group of other protestors by Israeli authorities.

As a seasoned lawyer, Hal immediately demanded to know from the Israeli authorities at the detention centre the legal grounds upon which he was being detained. Eventually, his persistence was deemed too troublesome and he was released. In true Hal Wootten fashion, he refused to leave the facility until his colleagues were all also released – which they duly were.

Hal made an effort to visit as many law faculties in Palestine in order to see how he could help. He figured that the most practical way to help was to arrange for promising Palestinian law graduates to continue their higher education in Australia. He pulled some strings and organised a multi-million dollar grant scheme (possibly through Union Aid Abroad-APHEDA) to get Palestinian law graduates into Australian universities to complete their Master and PhD level studies in law. The scheme was resoundingly successful.

Leveraging his good will and contacts in Australia, Hal arranged for the Deans of 5 Palestinian law schools to visit Sydney and meet with their Australian counterparts. I was lucky enough to be invited by Hal and his wife Gillian to meet with the group. Both Hal and Gillian opened their home to me on several occasions and I had to pinch myself sometimes listening to Hal’s wonderful stories including how his old friend Sir John Kerr called him right after the dismissal seeking affirmation for his actions.

At 92, Hal enrolled as an undergraduate in Arab Studies and attended the inaugural Sydney Palestinian film festival. He subsequently became one of the driving forces behind the festival’s growth and its continuation to this day.

My last encounter with Hal was in early 2015 at another conference hosted by UNSW. I was invited to introduce and moderate a talk by Ha’aretz Journalist Amira Hass. Following the talk I was able to engage with some attendees who were critical of Hass’ views. Hal was nearby and I introduced him to the group. Friendly platitudes evaporated quickly as discussion turned to the Palestine Israel conflict. Hal’s sharpness had not faded, but I could see that he himself realized that his 93 year old body could not keep up with his mind. He chose to leave that discussion with great dignity.

Hal’s contribution to Palestinian progress remains a significant chapter for the Palestinian community. The law graduates he assisted continue to help build a future Palestinian state based on the rule of law and educate the next generation of Palestinian lawyers.

As a measure of the man, Hal’s great contribution to Palestinian legal progress is only a footnote beneath a long life of other monumental achievements. 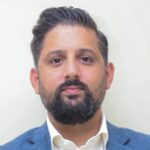 Andrew has taught law in Australia, Europe and the Middle East and is currently an Associate Professor at the College of Law, Qatar University. He is Chair of the Commercial Law Discipline group at the International Association of Law Schools (IALS) and Section Head for Economic Diversification at the Doha based think tank the Centre for Law and Development (CLD). Andrew is also an industry consultant that researches and publishes on a range of financial services topics particularly relating to technological innovations.