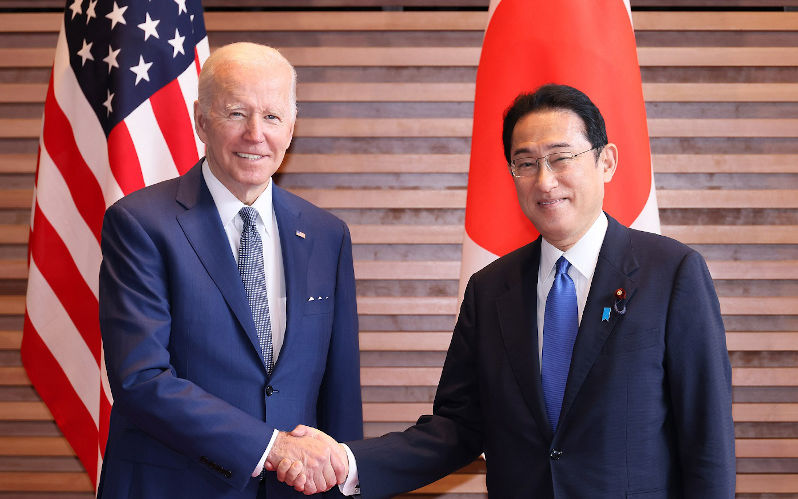 The West sees the East as taking over and is asking the South to join their side.

“But since the West still controls the money (even though a lot is borrowed from the rest) everyone is on a ‘wait and see’.”

Sheng’s article was distributed by the Asia News Network and published in The Korea Herald.

He says India is leading the intellectual charge in formulating views from the South that are articulate and convincing – summed up as “don’t drag us into fighting a Cold War of your own making, we are only on our own side.”

Sheng notes with approval the motto India has devised for this year’s G20 summit, which it is hosting: One Earth, One Family, One Future.

India recently hosted a two-day virtual summit of developing countries from Asia, Africa and South America. It was called the Voice of the Global South.

Kyodo News reported Indian Prime Minister Narendra Modi as saying it is natural India aims to amplify the voice of the Global South.

Global growth in the future would come from developing countries, as advanced economies were slowing down, he said. “As the eight-decade old model of global governance slowly changes, we should try to shape the emerging order,” Modi said.

The Hindu newspaper said in an editorial the Global South summit was a departure from New Delhi’s practice of looking to the ‘high table’ of global leadership – the UN Security Council and the G7.

It was now focusing on a more just view of the world and how the developing world was being affected by global inequities.

The leaders of Japan and the US met last week, with Joe Biden praising Tokyo’s “bold leadership” in boosting its defence capabilities and adopting a more aggressive military stance.

It was Fumio Kishida’s first visit to Washington since taking office and came shortly after he announced Japan would double defence spending and acquire a counterstrike capability that could target enemy bases.

The Japan Times reported the country’s military budget would become the world’s third biggest, after the US and China.

The paper said Biden told Kishida they were meeting at a remarkable moment in the alliance. “I don’t think there has ever been a time when we’ve been closer to Japan,’ Biden said.

Japan had previously avoided developing offensive weapons, the paper said in a long news/analysis piece. It had been content to be the “shield” while the US carried the “spear”.

“Friday’s meeting … signaled that the traditional division of labor was increasingly becoming a thing of the past,” it said.

Singapore’s The Straits Times said that on the trip Kishida visited five out of the other six G7 capitals – Paris, London, Rome, Ottawa and Washington. He had returned to Tokyo with wind in his sails, having won G7 backing for his radical overhaul of the country’s pacifist security posture.

Walter Sim, the paper’s Japan correspondent, said among the key discussions in Britain and Italy was a plan to jointly develop fighter planes to replace Japan’s ageing fleet.

The agreement was touted as the most significant defence pact between London and Tokyo in more than a century, the paper said.

Japan and Australia had signed a similar deal earlier this month.

Australian news media are inclined to support Government announcements on security and defence measures. In Asia, the response is often more negative.

There were concerns it could backfire, destabilise the region and prompt an arms race.

“The major shift in Japan’s security policy was decided without a broad-based national debate,” the paper said.

In a separate editorial, the paper noted officials involved in top-level security talks between the US and Japan stressed their commitment to countering China’s rapid military build-up but did not offer a plan to ease tensions through dialogue.

“Military conflict must be avoided at all costs,” the editorial said. “It is vital to map out an effective strategy for co-existence.”

A commentary in The Korea Times said Koreans would look on the prospect of Japan’s military renaissance with suspicion, if not alarm.

“Memories of Japanese colonial rule over Korea burn deep in the Korean psyche,” it said.

The Straits Times noted London’s interest in moving closer to Tokyo. The UK has many reasons for showing up in the Indo-Pacific, the paper said in an editorial.

“With the decision to leave the European Union proving costly for the British economy, it needs new economic partners,” it said.

Japan already had one of the strongest military forces in the world, the article said.

“This military budget hike is unnecessary,” it said.

China has geopolitical and historical reasons for opposing Japan’s change of strategy and this is reflected in their official media.

A China Daily editorial said the build-up, supported by the US, went far beyond the bounds of Japan’s so-called pacifist constitution.

“It has long been the consensus of the entire world that Japan should not be allowed to development into a military power again,” the editorial said. “This has been an important foundation for peace in East Asia and the world at large.”

A Global Times editorial said the US and Japan were shaking the foundations of the ‘rules-based international order’.

“Over the past 70 years, Japan has never entirely accepted its defeat,” it said. “It is time for Tokyo to realise that in the Asia-Pacific region…what is really powerful is not the so-called ‘spear’ or ‘shield’ but the general desire for peace and development.”

Concern about creeping regression of democracy

Four people have filed a motion with Indonesia’s Constitutional Court, seeking a review of controversial articles in the country’s new penal code, The Jakarta Post reports.

The provisions could lead to people being imprisoned for insulting a sitting president or the government, it says in an editorial.

“It is not an exaggeration for us to suggest that the petition represents the voices and minds of the silent majority in this country, who are concerned, even frustrated, by the creeping regression of democracy,” the editorial says.

The court revoked provisions in the old penal code that restricted civil liberties in landmark rulings in 2006 and 2007, it says.

“As guardians of constitutional democracy, the Constitutional Court should take into consideration the damage the controversial provisions will do to hard-won civil liberties,” the paper says.

“They have the opportunity to deliver another landmark decision.”

“MPs buy votes, get into office, take control of certain cabinet ministries, come up with development and procurement projects and line their pockets through rigged projects with inflated projects and shoddy results.”

Writing in Bangkok Post, Thitinan, a Chulalongkorn University professor, said the corruption led to a loss of public trust in governments and elected politicians. This led to coups and constitutional changes. (Thailand has had 20 constitutions since the end of the absolute monarchy in 1932).

“The often-told and well-substantiated stories of unscrupulous politicians buying votes from supposedly uneducated upcountry voters affirm the belief in some quarters that good leaders are in fact appointed, not elected,” Thitinan said in a regular column.

“Appointing ‘good’ people to lead the country has become imperative to keep ‘bad’ politicians at bay,” he said.

“Out of the 13 successful coups and 20 coup attempts Thailand has witnessed since 1932, most were aimed at getting rid of corrupt politicians.”

The 2014 coup, orchestrated by then-General Prayut Chan-o-cha, however, was different. With the help of a new constitution, Prayut secured the prime ministership for himself after elections were restored in 2019.

Thitinan said: “His rule both under the military government and after the 2019 poll has increasingly shown to more and more people that money politics is not limited to politicians but also the military and police forces, as well as bureaucracies and big business…

“Getting rid of money politics in the long run thus requires fighting corruption and graft in all corridors and corners of Thailand’s political arena.”

Xinjiang: stories of harmony and repression

An international Muslim delegation from 14 countries recently visited China’s Xinjiang region, inspecting mosques and bazaars and talking to residents. According to Global Times, an official English-language paper, they wanted to get a better understanding of the region’s development and protection of religious freedom.

The group’s leader, Dr Ali Rashid Nuaimi, chairman of the World Muslim Communities Council, told the paper the words he would use to describe the region were “developing” and “harmony”.

He said in a long interview: “There is harmony between the people in terms of different ethnic groups and also the co-existence of different values.”

The delegation started to understand the importance of integrating Muslims in China within the nation.

Earlier this month, however, The Diplomat magazine showed a very different picture of Xinjiang when it interviewed a Kazakh artist who had been detained in an internment camp for two years.

Beijing has cracked down on Kazakhs, as well as Uighurs and other Turkic ethnic groups.

Zhanargal Zhumatai had spoken out to help Kazakh farmers who were losing their land, she said, under the guise of grassland protection laws. Zhumatai, a former TV editor, was arrested in 2017 for having banned social media software (Instagram and Facebook) on her phone.

She said in the interview she was beaten and tortured in the camp. After two years, she was suddenly released – but her life remained under the control of the authorities.

She could not withdraw her money, her phone was disconnected and her passport was taken away.

“In the three years since her release, she has been hounded by Chinese policy,” the story said. “She was confined within the walls of her home, like a prisoner.”