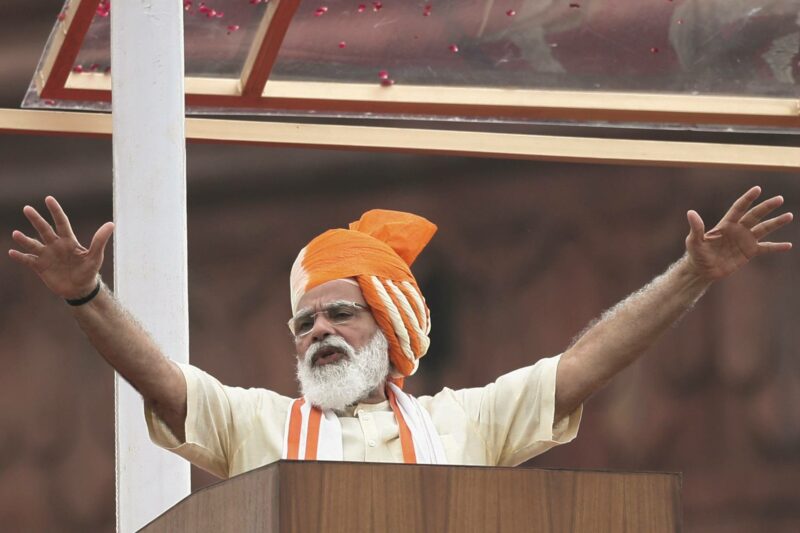 Indian Prime Minister Narendra Modi’s carefully cultivated competence bubble has been punctured by his government’s ineffectiveness amid the second wave of the COVID-19 virus that has ravaged his country.

A chain is only as strong as its weakest link. The Quadrilateral Security Dialogue process brings together Japan, Australia, India and the United States as an informal grouping of democracies to cooperate around the vast and critical Indo-Pacific maritime space.

India has always been the weakest link in the chain. Its sizable armed forces equipped with nuclear weapons are a bulwark against China’s much superior military might. Still, it’s a very poor country with a per capita income of only 3% to 5% of the other three; a weak state with limited capacity to govern a billion plus population; and a soft state without the political will to make and implement tough decisions.

The second wave of COVID-19 in April and May is India’s biggest national tragedy and international embarrassment since partition in 1947. The national and world press covered this in graphic detail (more than they would in their own countries), with images of people gasping to death on the streets, bodies piled up awaiting last rites and cremation and mass numbers of corpses floating in the Ganges River, many of which having washed up on its banks. Prime Minister Narendra Modi’s carefully cultivated competence bubble has been punctured by the open display of mass ineptitude.

In the wake of this stark and grim reminder of its manifold pathologies and weaknesses, the question must be asked: at which point would India become a liability rather than an asset for the other “Quad” partners? The question is important because the other three are bound together in formal alliances by security treaties and India is not, demonstrating less commitment.

The excitement, expectations and hopes of the Modi government in 2014, with promises of “minimum government, maximum governance” and “sabka sath, sabka viswas, sabka vikash” (with all, with everyone’s trust, development for all), are fading memories. On June 1, India’s official COVID-19 deaths per million was 238 compared to the world average of 457, the U.S. at 1,832, the U.K. at 1,873 and Brazil reporting 2,163.

The crux of the problem thus is not the unmitigated spread of COVID-19 but the lack of a fit-for-purpose public health infrastructure and the availability of medical supplies, equipment and drugs. India is a sobering reminder of why a strong economy is not an optional luxury but an essential requirement for good health.

Modi’s neglect of urgent economic and governance reforms in addition to requirements for a good public health infrastructure — choosing instead to go into a semipermanent campaign mode in every state election and focusing on a Hindu nationalist agenda — further aggravated the COVID-19 misery.

People’s health is vitally dependent on a healthy economy that gives the government the financial wherewithal to create an efficient universal-access public health system. No country achieves better health outcomes by becoming poorer.

India got the worst of both worlds: a smashed economy and a massive COVID-19 toll that peaked in May with the official count recording nearly 400,000 daily new cases and over 4,000 daily new deaths. Recovery will be a long haul on both the disease and the economy front.

The continuing legal fight with Vodafone over retrospective tax claims has eroded investor confidence. The goods and services tax suffered from design flaws and was badly implemented. The voodoo economics of demonetization was a disaster. And turning inwards by rejecting the Regional Comprehensive Economic Partnership signaled lack of faith in India’s competitiveness.

Slogans and sycophantic cheer squads can neither hide nor offset these pathologies. India has plummeted from the world’s fastest growing major economy when Modi took over, to the fastest shrinking.

The nation’s democratic credentials are also eroding, as recorded in annual surveys by the Economist Intelligence Unit’s Democracy Index, the U.S. Freedom House report and Sweden’s Varieties of Democracy project.

The methodological flaws of any one report can be questioned but the broad trendlines converge in a compelling narrative of reverses on democratic institutions, practices and discourse. Domestic unity has also been strained by injecting the poison of religious tensions into what had been a remarkably stable set of live-and-let-live arrangements for decades.

In a provocative paper in 2009, Lant Pritchett, then at Harvard University’s Kennedy School of Government, described India as a “flailing state.” Using examples from health, education and driver’s licenses, he said the decision-making “head” was disconnected from the “arms and legs” of implementation and the state was flailing helplessly with the world’s highest malnutrition rate, immunization rates below African countries’ and infant mortality worse than Bangladesh. Confused, chaotic, wracked by pain and tossed about helplessly — Pritchett accurately foreshadowed India’s coronavirus experience.

COVID-19 has brutally exposed the hollowness of India’s pretensions to power, status and influence and boasts of being a vaccine superpower and pharmacy to the world.

March’s virtual Quad summit already seems a distant dream. Echoing its birth amidst the humanitarian crisis of the Indian Ocean tsunami in 2004, the four leaders agreed to partner in the production and distribution of “safe, accessible and effective vaccines” in collaboration with the World Health Organization.

India committed to accelerate and expand production of U.S. vaccines; Japan vowed to help with finance; the U.S. promised to put its scientific-technological shoulder to the collective effort and Australia said it would assist logistically with the distribution in Southeast Asia.

After seven years of unchecked exercises in power, the Modi government cannot credibly blame predecessors or foreign mischief-makers for the sorry state of affairs. Sadly, the biggest indictment of India is the absence of a viable national alternative to the ruling Bharatiya Janata Party (BJP).

The Congress Party is the one other national opposition group, but the only glue holding it together is the Gandhi family. Far from inspiring the people and infusing them with hope for the future, this sad reality fills them with despair. Nor can Congress match the BJP’s fundraising, organizational and public communications skills.

Still, if by some miracle the exogenous COVID-19 shock breaks the government’s hubris and arrogance, encourages it to undertake urgently needed economic and governance reforms, shifts it to a more accommodative and pluralistic policy posture at home and a greater openness to free trade, its attractiveness as a Quad partner will grow. Just don’t hold your breath for this triumph of hope over experience.