It used to be said that governments are terrible at picking winners but losers are good at picking governments. Is that still true?

In the days of Margaret Thatcher and Ronald Reagan, ‘picking winners’ of industry was an object of scorn. Even their centrist successors believed the market knew best. Low taxes and light regulation were the path to growth. When financial crisis struck, as in 2008–09, the remedies were low interest rates, quantitative easing and broad fiscal stimulus, as well as limiting targeted assistance to distressed banks, auto firms and others. 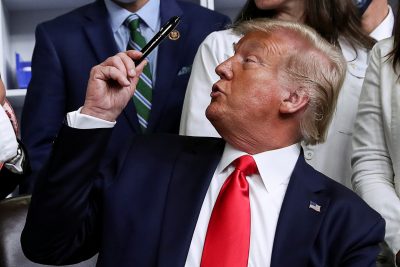 Before the Trump era, industrial policy — in the sense of detailed government guidance of economic life — was regarded as a hangover from the Soviet Union, to be embraced only by misguided developing countries.

Times change, nowhere more than in political fashions. Disruption of global supply chains caused a shortage of medical supplies, prompting the US government to stress domestic production of medical supplies and other essential goods. President Donald Trump even announced a US$765 million government loan to Kodak for the production of generic drug ingredients in the United States — an entirely new line for the old photography company.

Four broad forces explain the growing popularity of industrial policy in the United States. Foremost is the rise of China and its conversion — thanks to Trump’s aggressive policies — from an adversary to an enemy. Not only Director of Trade and Manufacturing Policy Peter Navarro (author of Death by China), but also Vice President Mike Pence and Secretary of State Mike Pompeo view China as an ‘existential’ threat to the United States. On 23 July 2020, in his speech ‘Communist China and the Free World’s Future’, Pompeo said: ‘We must induce China to change in more creative and assertive ways, because Beijing’s actions threaten our people and our prosperity’.

Even virulent China hawks cannot dismiss the country’s economic success. But they attribute China’s rapid growth to an array of subsidies, state-owned enterprises in key sectors and widespread theft of foreign technology. The hawks have given up on preaching market economics to Beijing. Instead they now seek to emulate what they believe to be China’s ‘magic sauce’.

The second force, closely related to the first, is apprehension that China will surpass the United States in military technologies, despite US defence expenditures of over US$700 billion annually — more than four times that of China. Military technologies cover communications (especially 5G), cyber skills and artificial intelligence (AI), all areas where China has demonstrated its strength.

The US Department of Defense (DOD) may keep the United States ahead of Chinese hypersonic cruise missiles and other instruments of battle, but observers question whether market incentives will ensure US leadership in mixed-use technologies such as 5G, cyber skills and AI. The United States is seeking to secure critical materials needed for military hardware. To produce rare earths that still heavily rely on Chinese supplies, the DOD awarded an Australian supplier with a US$36 million contract to build its processing plant in Texas to bypass a potential Chinese export ban on rare earths.

The third force propelling industrial policy is climate change. As Pigou argued a century ago, special taxes are needed to curb negative externalities — in our day, carbon emissions. But carbon taxes are wildly unpopular among Americans. In 1993, then president Bill Clinton and vice president Al Gore tried but abysmally failed to sell the country on higher gas taxes, and since then no president has tried. Instead, today’s progressive slogan is a ‘Green New Deal’, covering a multitude of government initiatives costing trillions of dollars to replace coal, oil and gas in all facets of American life.

Fourth, the COVID-19 pandemic brought insistent demands for government intervention in the United States across a range of medical products — masks, personal protective equipment, ventilators, treatments and vaccines. Medical exports were banned, and pharmaceutical companies were scolded for outsourcing their supply chains to China. President Trump issued an executive order requiring specified essential drugs and medical supplies procured by the government to be domestically manufactured. Then, with the passage of trillion-dollar relief measures, came funds to targeted companies. Before Kodak, Phlow Corporation’s promise to domestically produce ingredients for drugs won a US$354 million government loan in May 2020. At the same time, the US government is accelerating its investment in development and manufacture of potential COVID-19 vaccines, particularly by pre-ordering from US pharmaceutical companies.

These four forces taken together will supplant the market in important sectors of the US economy. Even more broadly, Biden has pledged to replace ‘shareholder capitalism’ with ‘stakeholder capitalism’, leaving wide open the definition of stakeholders and their avenues of influence.

Given the new political landscape, perhaps the most American economists can do is shape, at the margin, the contours and mechanisms of industrial policy. Economists can argue for broad-based incentives, such as research and development tax credits for designated sectors. And they can urge the President and Congress to let experts rather than cabinet officers or legislators choose companies to be rewarded with targeted bounties. But until the public mood changes, economists will have no more success than King Canute in stopping this new wave of industrial policy.

Gary Hufbauer is a non-resident senior fellow at the Peterson Institute of International Economics (PIIE).

Euijin Jung is a research fellow at PIIE.