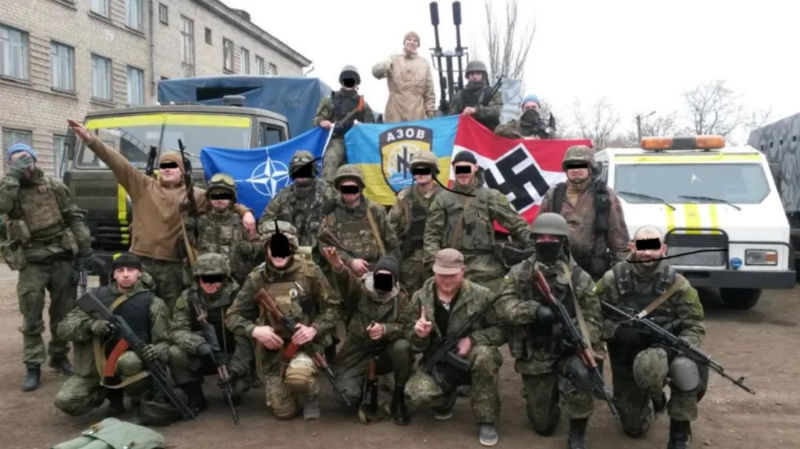 Representatives of Ukraine’s neo-Nazi Azov Battalion have been touring Israel to drum up support for the unit’s imprisoned fighters. They have been meeting with Israeli politicians and soldiers.

Azov intelligence officer Illia Samoilenko was released in a prisoner exchange with Russia in September.

He had been one of the hundreds of Azov fighters who surrendered in May at the end of the long Russian siege of the eastern city of Mariupol.

Samoilenko also told The Times of Israel that “he sees Israel and Ukraine on the same side, the civilized battling the uncivilised in a struggle for the future of humanity,” the outlet summarised.

“We have prosperity, beautiful, prosperous, beautiful civilisation, and they have medieval cavemen,” he said. It seems the “they” in this case are the Palestinians and the Russians, who Samoilenko regards as “uncivilised.”

Along for the Israeli tour with Samoilenko is Yulia Fedosiuk, the wife of an imprisoned Azov fighter and a far-right activist in her own right.

Both were on a charm offensive this week, as part of a wider push to whitewash Azov’s image in the West.

Before Russia invaded Ukraine in February, it was widely acknowledged that the Azov Battalion promoted Nazi ideology.

The Anti-Defamation League, a major Jewish communal and Israel lobby group, for instance, warned in 2019 that Azov was a “Ukrainian extremist group” with “ties to neo-Nazis and white supremacists.”

But now with Western governments arming Ukraine, including the Azov Battalion, in a proxy war against Russia, there is a concerted effort to hide this ugly reality from public view.

Consequently – with help from the media and now Israel and its lobby – Azov has in recent months attempted to rebrand itself.

Seeking a stamp of approval from Israel is a time-honoured strategy of European and American far-right extremists seeking to gain mainstream legitimacy.

In May The Times of London reported that Azov was planning to change its symbol from the wolfsangel – a far-right symbol associated with a division of the German army during Hitler’s Nazi regime.

But even that surface-level whitewash seems to have been too much of a change for Azov to endure. The symbol remains visible in all of Azov’s online outlets.

And photos posted by a pro-Azov Twitter account, the “Association of Families of the Defenders of Azovstal” show that Samoilenko and Fedosiuk visited Masada, where Samoilenko wore the Nazi-linked symbol on his uniform.

Masada is the site of a mythical last stand by Jewish fighters against Roman forces. Today, Israel holds swearing-in ceremonies for its new soldiers there, and they pledge that “Masada shall not fall again.”

The Azovstal association’s Telegram account posted photos of the Azov members at Masada and stated, “When today in Israel we talk about the defence of Mariupol, the Israelis … constantly repeat: ‘Mariupol is your Masada.’”

As well as Masada, the tweets show that the two Ukrainian militants also met with reservist Israeli soldiers, attended a film screening and met with Naama Lazimi – a leading Israeli politician in the Labor Party, which is part of the outgoing coalition government.

During the meeting with Lazimi, Samoilenko “debunked the myths created by Russian propaganda about the Azov regiment,” the Azovstal association claimed on its Telegram channel.

This seems to be a reference to the Russian government’s accurate claim since the start of its invasion of Ukraine in February that the Azov Battalion is a Nazi organisation.

But recall that this wasn’t only a claim from Russia, it was widely acknowledged and reported in Western media, including by the EU-funded “investigative” website Bellingcat.

In 2019, Bellingcat extensively documented the battalion’s international outreach to white supremacist groups, noting that “Azov’s interest in reaching American extremists and the Ukrainian group’s comfort in cooperating with neo-Nazis in the US and West was on display” until at least 2018 – four years after the Azov battalion was integrated into Ukraine’s national guard.

But as the US, UK and EU wage their proxy war against Russia in Ukraine, Western media have largely fallen in line, portraying Azov sympathetically as the “defenders of Mariupol,” as misunderstood nationalists and as the victims of “Putin’s propaganda.”

Even the Anti-Defamation League, which previously condemned Azov’s Nazi ties, is falling into line.

After the Russian invasion, the ADL engaged in blatant Holocaust revisionism in order to whitewash Hitler’s wartime collaborators who are today venerated as national heroes in Ukraine even though they helped the German leader murder hundreds of thousands of Poles and Jews during World War II.

The ADL is now also helping to airbrush Azov. Recently, the Israel lobby group claimed that the Azov Battalion’s 2014 integration into Ukraine’s national guard meant that the Azov military unit had split from the broader far-right Azov political movement and from the movement’s founder Andriy Biletsky.

As a consequence, the ADL now says that it “does not see Azov Regiment as the far-right group it once was.”

But in 2019, Bellingcat had already reported on “newly uncovered statements by a senior law-enforcement official” in Ukraine that “suggest that incorporation of the Azov Regiment into the National Guard of Ukraine didn’t affect the far-right ideology espoused by the former’s members – and instead allowed Azov to obtain sophisticated weaponry and build their own political party.”

“Restore the honour of the white race”

In recent months, the Azov Battalion appears to have renamed itself the “Azov Regiment,” another apparent attempt to legitimise itself as a normal element of the Ukrainian state and whitewash its Nazi image while maintaining all the same policies.

This name change was played up in a puff piece by The Jerusalem Post this week, which claimed that “​​the Azov Battalion [is] the predecessor of the Azov Regiment.”

But just as when the US and its allies have repeatedly attempted to rebrand the Syrian branch of al-Qaida as “moderate rebels,” such cosmetic changes are unlikely to fool anyone outside the ranks of spineless mainstream media journalists.

And despite Samoilenko and Fedosiuk’s charming of the Israeli press this week, there’s absolutely no reason to think that Azov has moved away from its racist, anti-Semitic roots.

Biletsky has “pledged to restore the honour of the white race” and when he was in parliament he advanced laws forbidding “race mixing.”

In 2014 he wrote that “the historic mission of our nation in this critical moment is to lead the white races of the world in a final crusade for their survival. A crusade against the Semite-led untermenschen.”

Despite the sympathetic treatment she has received this year from the same Western media that valourised the Azov Nazis, Yulia Fedosiuk too, is an active part of the Ukrainian far-right.

“One of my best friends, he is a Jew and he is in Azov,” Fedosiuk claimed in a Times of Israel interview this week.

Samoilenko made similar claims in his Haaretz interview, an assertion which the paper noted he was “unable to back up immediately by providing names.”

In a revealing piece on Fedosiuk, researcher Bob Pitt observes that “Azov’s propensity for double-talk and denial is particularly notable in connection with anti-Semitism, where assurances to western journalists that the movement welcomes Jewish members are contradicted elsewhere by expressions of extreme hostility towards Jews.”

Pitt writes that Fedosiuk is a dedicated fascist who rants against feminism and LGBTQ rights and has valourised early 20th century Romanian fascist leader Corneliu Codreanu.

Codreanu was a virulent anti-Semite who once declared that “The historical mission of our generation is solving the kike problem” (“kike” is an extremely derogatory term for Jews.)

As Pitt noted, when Fedosiuk worked for Azov’s publishing house Plomin, it published Ukrainian translations of writings by Codreanu, the Italian fascist Julius Evola and other notorious figures from Europe’s fascist history.

Israel has close ties to both Russia and Ukraine. Despite President Volodymyr Zelensky complaining that Israel has declined to provide Ukraine with the “Iron Dome” missile system, arms, training and fighters from Israel have reached Ukraine – including the Azov Battalion.

In April, video emerged of Israeli mercenaries fighting in Ukraine, thanking the Israeli government for “helping us” in their war against Russia.

Also that month, video posted online by Azov showed that Israeli anti-tank weapons were being used by the unit.

The Azov Battalion began as a gang of far-right street thugs. Its activists formed the vanguard of the 2014 US-backed “Maidan” coup which overthrew the elected government of Ukraine. Soon after, it was integrated into Ukraine’s armed forces, where it remains.

In 2018, Israeli human rights lawyer Eitay Mack wrote to the Israeli government to object that the country’s aid to Ukraine was being used by neo-Nazis.

In response, the government confirmed that its arms licenses to Ukraine were granted “in full coordination with the Ministry of Foreign Affairs and other government entities” but did not deny arming Ukrainian Nazis.

The Electronic Intifada’s 2018 exposé of Israel’s arming of Ukrainian Nazis caused a minor diplomatic incident, when Ukraine’s ambassador to Israel wrote a formal complaint to Haaretz after the newspaper echoed our reporting.

Mack petitioned Israel’s highest court to stop the state arming Ukrainian Nazis. The government responded by requesting hearings be held behind closed doors and imposing a gag order on the press.

Asa Winstanley is an investigative journalist and Ali Abunimah is executive director of The Electronic Intifada.

Ali Abunimah is a journalist and the co-founder and executive director of the widely acclaimed publication The Electronic Intifada, a nonprofit, independent online publication focusing on Palestine. A graduate of Princeton University and the University of Chicago,