JAMES FERNYHOUGH. Revealed: Australia’s richest professionals and the suburbs they live in.

If you’re a surgeon living in one of the opulent suburbs on the southern shore of Sydney Harbour, then congratulations: you are a member of the highest paid group in Australia. This will come as no surprise for people who have experienced fee gouging by surgeons  and anaeshetists

Figures released by the Australian Tax Office on Friday revealed that, with an annual income of $393,467, surgeons are the highest paid professionals in Australia.

They are closely followed by anaesthetists, who earn on average $359,056. Of the 10 highest paid professions, no less than five were in the wider medical professions.

The other five were financial dealers, lawyers, mining engineers, CEOs and engineering managers. 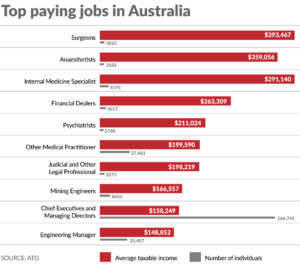 As for the wealthiest postcodes, six out of 10 were in Sydney, with the inner eastern postcode of 2027 – running from Darling Point to Point Piper. The average income in that postcode was $192,500

Four of those six were in Prime Minister Malcolm Turnbull’s electorate of Wentworth, which is situated on the southern shore of Sydney Harbour, running roughly from the edge of the CBD to ocean. It includes desirable areas such as Double Bay, Point Piper and Vaucluse.

The other three Sydney postcodes were on the north shore of Sydney Harbour, and included Mosman, Woolwich and Hunters Hill.

Melbourne’s Toorak came in at number two on the list. The only other Victorian postcode on the list was Portsea on the ritzy tip of the Mornington Peninsula.

All but one of the postcodes were in New South Wales or Victoria. The Perth postcode of 6011, which covers Cottesloe and Peppermint Grove, was number eight. 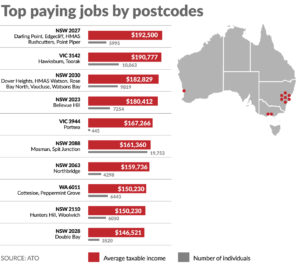 This article was first published in The New Daily on the 27th of April, 2018.

James Fernyhough is a money editor.