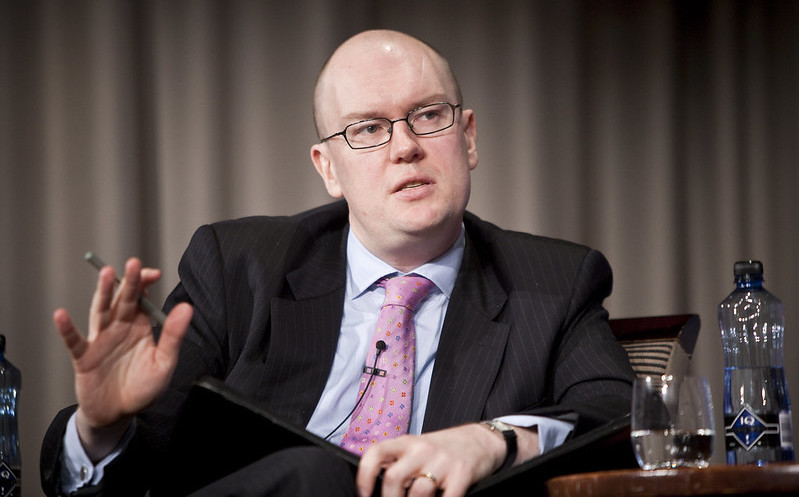 Michael Fullilove, from the Lowy Institute, observed in a recent Foreign Affairs article that, “the prospect of the former President’s return to power in 2024 is ghastly.” (Image: Flickr/United States Studies Centre)

The case for Japan to move firmly away from being bound to serve the paramount interests of the US in East Asia and beyond – as seen, erratically, from Washington – while emphasizing that Japanese interests are its foremost concern, is now demonstrably clear.

As the US ramped up its predictions of hostile Russian behaviour in relation to Ukraine, Washington also applied pressure on Japan to agree to divert shipments of Liquid Natural Gas (LNG) bound for Japan, to Europe, if needs be.  Japan replied that it would “consider ways it could help”, according to the Asia Financial Newsletter.  Not a “no” – but well short of replying “just say when!”

The Treaty of Mutual Cooperation and Security between the United States and Japan (US-Japan Security Treaty) of 1960 replaced an earlier version from 1951.  This first version, which arose out of the formal termination of World War II in Asia, left Japan as a heavily garrisoned, American Tributary State.  The 1960 Treaty wound back some of the extraordinary powers enjoyed by the US (for example allowing the US military to intervene in Japanese domestic disputes) – but it still leaves the US as a formidable managing partner.

Another concern supporting this cautious response is the fact that Japan has been in negotiations with the USSR – and now Russia – for over 60 years in relation to claims for the return of two of the Kuril islands.  The Lowy Institute reported in late 2020 that, although the dialogue is stalemated, it remains on foot and Japan wants to keep it alive.

Apart from Japan’s wariness about being drawn into America’s glaring stand-off with Russia over Ukraine, political events within the US are far from reassuring for Tokyo.  Both the current Biden administration and the previous Trump administration have pursued an ill-tempered, confrontational policy designed, somehow, to contain the rise of China by an enhanced form of encirclement – backed up by massive military power and an unceasing, hostile media onslaught.

The Biden government has been as maladroit as its predecessor in dealing with China in many ways, but it has managed to revive some allied support, alienated by Trump, through the Quad grouping (involving the US, Australia, Japan and India) and the, militarized, AUKUS alliance (sometimes called the Axis of AUKUS – comprising the US, UK and Australia.).

What looks increasing likely, however, is that the US may revert to a Trump-style – or even Trump-led – government in 2024.  Michael Fullilove, from the Lowy Institute, observed in a recent Foreign Affairs article that, “the prospect of the former President’s return to power in 2024 is ghastly.”  Such concerns are compounded by forceful current predictions that the Democrats may lose both their slim House and Senate majorities in the US mid-term elections in less than nine months.

Fullilove highlighted the ongoing instability in US politics.  Many leading commentators, including Francis Fukuyama, see this instability as being fueled by deeply entrenched, fierce political polarization.  The Social Contract in America is, arguably, more dangerously frayed than at any time since the Civil War.  Thomas Homer-Dixon, a Canadian political scientist, recently maintained, in the Toronto, Globe and Mail that the US is becoming increasingly ungovernable.  He reviewed a range of commentaries expressing serious concern about the prospect of extended, violent political conflict in the US.  Homer-Dixon also drew sharp, comparative attention to the drawn-out demise of the Weimar Republic prior to the rise of fascism in Germany.

The US seems, too, to be losing it already diminished grip on basic political morality.  CNN recently reported that Washington had commandeered, US$3.5 billion, or about half of all Afghanistan public reserves held in the US, in order to help fund litigation lawyers acting on behalf of 911 victims.  This confiscation was legalized by using a White House Executive Order at the same time as wretched, mass misery in Afghanistan has reduced families to selling their children (especially daughters) in order to secure food.  Washington’s callous disregard of the most fundamental human rights in Afghanistan is dumbfounding.

Japan was an occupied state after the end of World War II.  It remained a tributary state of the US for some years until a second political-status phase began: it regained measurable independence as a reformed (by America) state, especially once the US-Japan Security Treaty was revised in 1960.  The US has, however, retained, huge military, political and economic influence within Japan ever since.  It remains, in significant ways, an American Satellite State, whose fundamental security is guaranteed by the US.

The United States Forces Japan (USJF) is dominated by the US Seventh Fleet which comprises 60 to 70 ships and some 40,000 personnel. The total number of US military in Japan is around 55,000 stationed across more than 20 major bases incorporating over 80 different facilities.

Japan has migrated, with remarkable success, overall, between these two main chapters in its post-War history.  Nevertheless, there are grounds to expect that it should and will move beyond this second phase over coming decades.

One important reason is that dealing with its anxious and precipitate, massively powerful senior collaborator is already conspicuously more challenging than it once was and that relationship is set to grow more fraught.  The US is gravely polarized (socially, politically and economically) and its political institutions struggle badly to provide the means to counter these centripetal tendencies.  Indeed, those institutions are now actively and widely being coopted to amplify a series of major political confrontations.  This has become, for Japan, a remarkably difficult and unpredictable relationship, made additionally so, the more quarrelsome the US becomes.

Another key reason why change is in the wind, is rather more positive.  Kishore Mahbubani’s latest book, Why the 21st Century will be an Asian one, explains how the entire Asian group of countries (in the UN) had a combined GDP which ranked third behind the US and Europe in 2000.  By 2020, this same Asian group had moved into first place (using Purchasing Power Parity (PPP) metrics) with a combined GDP of US$32.8 trillion, ahead of the North America ($22.7 trillion) and Europe ($20.8 trillion).  PwC, Mahbubani notes, expects that the top five economies world-wide by 2050, measured by PPP, will be, in order, China, India, America, Indonesia and Brazil.  That is, three of the top five economies will be Asian – and none will be European.

China is already Japan’s leading trading partner, taking around 22% of exports from Japan.  When Hong Kong is added in, this figure rises to around 27%.  Exports to the US account for around 19% of total outward trade.

Japanese exports to – and investment in – China look certain to continue advancing, compared to the US.  This is despite the current, intense US, China-containment project.  If this were not such a prominent factor, Japan’s trade-engagement with the rise of China would be even more conspicuous.  For example, Japan, is potentially a very good partner-fit for a range of offshore development projects unfolding under China’s massive Belt and Road Initiative.

It will not be easy for Tokyo to reduce the US embrace of Japan.  But the case for Japan to move firmly away from being bound to serve the paramount interests of the US in East Asia and beyond – as seen, erratically, from Washington – while emphasizing that Japanese interests are its foremost concern, is now demonstrably clear.