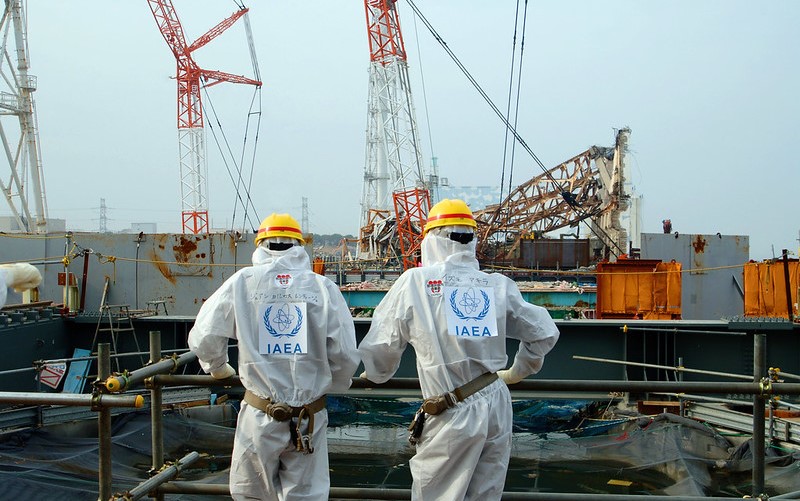 Japan will rival Australia for the ‘fossil prize’ at COP26 as it pushes a revival of its nuclear industry in the name of climate change policy.

One prize that both Japan and Australia will be hoping not to be awarded at the COP26 world conference in Glasgow is the one known as the “Fossil Prize”.

It is the award issued in the name of the global nature conservation non-government organisation Climate Action Network to the country or countries judged least committed to taking the steps necessary to avoid climate disaster.

Both were reluctant recipients of the award, along with Brazil, at the opening day of Madrid’s COP25, on December 3 2019: Japan, for then trade and industry minister Kajiyama Hiroshi’s statement that Japan intended to maintain its coal-fired power plants; Brazil, for multiple reasons but especially the deforestation of the Amazon; and Australia, much of it on fire at the time, for Prime Minister Scott Morrison’s refusal to acknowledge a link between climate change and those fires, and for being “the world’s third biggest fossil fuel exporter”.

As of 2021, Australia, represented again at Glasgow by Morrison, and Japan, represented by the recently (I4 October) launched government of Fumio Kishida, both strive to convey the impression that they are good global citizens. Both have announced commitment to zero net carbon emissions by 2050, and both have proposed interim targets for 2030, although those proposals leave much to be filled in as to the concrete steps. Kishida offered reduction of greenhouse gas emissions to 2030 by 46 per cent over 2013 levels and Morrison 26 to 28 per cent over 2005 levels.

The percentage figures, however, conceal a great deal.

Japan’s position on emissions and warming, spelled out in the 6th Strategic Energy Plan drawn up in August and formally adopted by cabinet on the very eve of Glasgow in October 2021, remains apparently untranslated and has received remarkably little attention.

Its 2030 targets include renewables (“natural” energy sources) 36 to 38 per cent of the total, nuclear 20 to 22 per cent, and thermal (gas, coal, oil, in other words fossil) 20, 19, and 2 per cent respectively. It amounts to a good step forward from the 2018 goals of renewables 22 to 24 per cent, nuclear 20 to 22, and fossil 56, but not only does the plan call for retention of a substantial fossil fuel energy sector but it ties carbon and nuclear goals inextricably in the same overall program.

The 46 per cent cut in carbon emissions (with a suggestion that 50 per cent might be possible) sounds impressive. However, the internationally recognised Climate Action Tracker argues that to be consistent with the 1.5 degree Celsius warming limit agreed at Paris “a domestic greenhouse gas reduction of more than 60 per cent below 2013 levels by 2030” is necessary and therefore “essential for Japan”. Coal fired power would also have to be shut down by 2030.

Equally important is the implication of Japan’s seeking to gain UN endorsement for its nuclear program by tying it to carbon cut.

Following the catastrophic Fukushima quake/tsunami/meltdown of 2011, Japan shut down all 54 of its then functioning nuclear reactors, reducing the sector from 30 per cent of national energy supply to zero.

Recovery since then has been slow. Ten have since been switched back on but as of 2020 they were supplying just 4 per cent of energy. In the decade since Fukushima, a government and bureaucracy whose faith in and commitment to the nuclear is unshaken has confronted a public terrified and traumatised by what happened then and the fear that it might happen again.

The strategic plan, with its goal of 20 to 22 per cent nuclear by 2030, calls for roughly 30 more reactors to resume operation, including at least three currently under construction. To accomplish that government will have to persuade a deeply sceptical public (and electorate), carry out safety protocols of considerable and very expensive complexity, fight multiple judicial challenges, and extend the life of very old reactors shut down after Fukushima well beyond their planned 40 years of life.

All in all it is an absurdly optimistic agenda.

Japan would also have to find a solution to three chronic nuclear industry problems: what to do with the nuclear-contaminated wastes from the country’s reactors, including about 50 tonnes of separated plutonium (albeit that much of it is in British or French hands), what to do with the stockpile (said to be 19,000 tonnes) of reactor wastes piled up already to the brink of capacity at the existing reactor sites, with no prospective long-term repository, and what to do with the roughly one and a quarter million tonnes of polluted water (water used to cool the collapsed reactor cores) hat has accumulated in vast tanks along the Fukushima coast over the past decade.

The government must reprocess its spent fuel stockpile because as Kishida stated when campaigning for office just before he became prime minister in 2021, the existing reactor sites have reached or are on the brink of reaching their capacity. The plutonium extracted in that process, mixed with uranium, yields MOX fuel for feeding existing reactors. As for the irradiated water, which contains highly toxic substances such as strontium-90, cobalt-60, and plutonium-239, the current plan, approved by government, is to dilute it and then pour it into the Pacific Ocean, gradually, over the coming 30 or so years.

The strategic plan’s path to a 36 to 38 per cent energy dependence for Japan on renewables and 20 to 22 per cent on nuclear might be theoretically possible but the popular Japanese antipathy for anything nuclear would make it very hard, the cost of reprocessing and resuming MOX works would be astronomical (MOX fuel costing roughly 23 times more than conventional uranium fuel), and it is hard to imagine global opinion warming to such a nuclear-based future.

Few if any of the countries gathering at Glasgow are likely to be prepared for a debate on the pros and cons of nuclear power generation, and Japan has scarcely given notice of its extraordinary proposal to Glasgow.

To date the nuclear core of Japan’s climate change plan has received minimal attention, but the UN countries assembled at Glasgow should understand that the “natural energy” it brings to the Glasgow table depends on “20 to 22 per cent” of the energy grid being nuclear.

Japan’s 46 per cent carbon emission cut by 2030 and the planned 36 to 38 per cent “natural” energy or renewables target must be understood as dependent on the revival and expansion of its nuclear sector. In other words, while the rest of the world gradually closes down its nuclear sector and expands its commitment to renewables, especially solar and wind, Japan attempts to forge a plutonium path to carbon neutrality.

Its climate change policy is also a nuclear energy promotion policy and it is tied, as noted above, to the dumping of huge quantities of irradiated spent fuel into the Pacific.

Kishida and Morrison must rank among the most reluctant and recent converts to the cause of cutting carbon emissions.

They share with their reluctance on carbon-cutting a readiness to devote virtually unlimited resources to their military. Kishida’s ruling Liberal Democratic Party recently adopted a campaign pledge to double, or “more than double”, military expenditure (already one of the highest in the world), while Morrison has committed Australia to one of the largest military projects of recent world history — the construction of eight nuclear-powered submarines over the coming several decades, at astronomical cost.

With the world currently way off track to reach carbon emission targets compatible with continuance of human civilization, nothing could better attest to Morrison and Kishida’s seriousness of purpose than the pledge to cancel both the weapon-doubling Japanese and the submarine-building Australian commitments, and to divert the budgets set aside for such projects to promoting truly green technologies, beyond both fossil dependence and nuclear dependence.

That might not be so likely, and it might not win them any Glasgow award, but it would earn them a place of honour in world history.