We are deeply concerned that the recent rise in anti-Chinese sentiment is driving a marked escalation in racial abuse towards Asian Australians. This poses a serious threat to our national unity.

As Australians of Chinese heritage, we have been shocked by footage of the vilification of Asian Australians that has circulated globally across social media with many of the victims targeted because of their Asian appearance. These instances are not isolated. In February, the Australian Human Rights Commission reported that one in four people who lodged racial discrimination complaints in the past two months say they were targeted due to COVID-19.

Australians are being targeted because of their Asian heritage or appearance and we cannot allow this disturbing trend to continue unchallenged. We ask for fairness in our national debate, our media reporting and in our communities.

Chinese and other Asian Australians have been in Australia since the 1800s. They have helped to build this nation, fought for Australia in both World Wars and are deeply loyal citizens.

Australians of all backgrounds mobilised and donated generously to affected communities and firefighters during the recent bushfires. And as Australia now battles the virus facing a shortage of personal protective equipment, Chinese Australians have been sourcing and donating large quantities of medical supplies to Australia, alongside other generous organisations and individuals.

As we confront the COVID-19 pandemic, national unity is critical to our defence and recovery.

Whilst robust debate about the bilateral relationship between Australia and China is appropriate and important – especially in the context of the protection of our democratic institutions and values – it is essential that the distrust, disenfranchisement and vilification of Asian Australians not be tolerated at any level.

To allow abuse of any group to occur in our current crisis, jeopardises Australia’s social cohesion at the time when we need it most. This is a time for all Australians to come together. 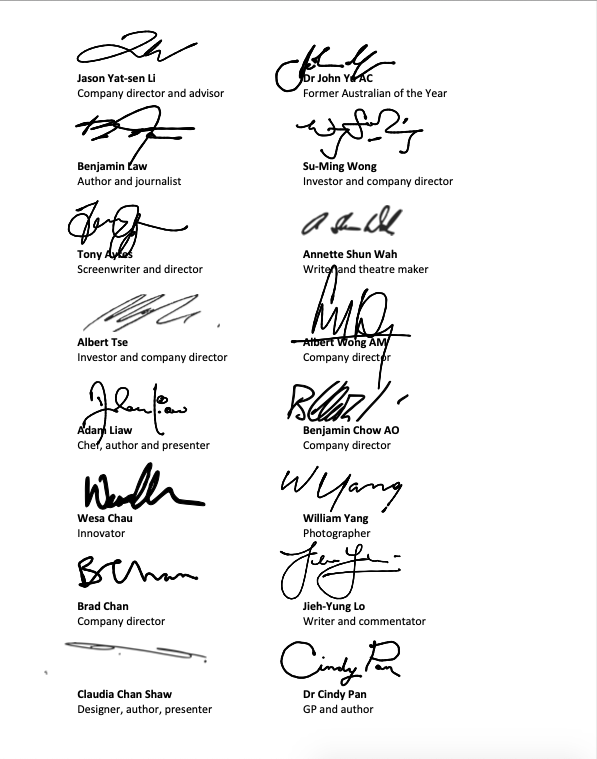