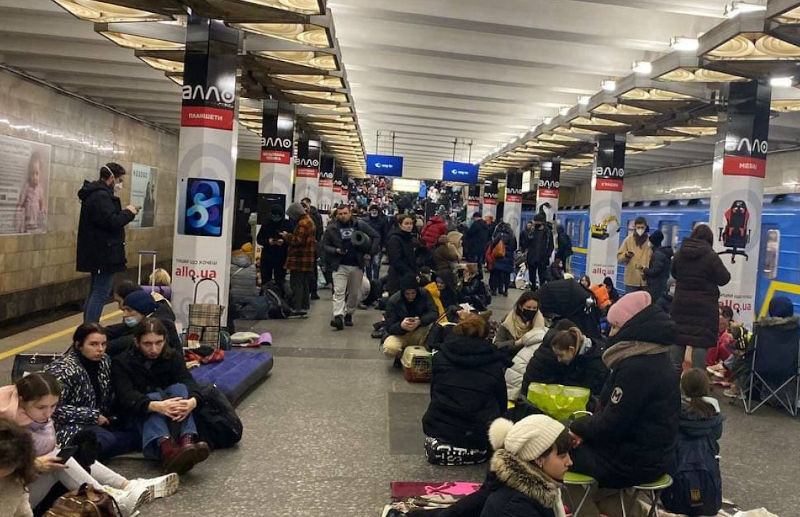 While covering Russia’s aggression in Ukraine, there is a real focus on civilian victims of war. Image: Wikipedia Commons
Major American media outlets oppose military aggression… unless the United States is doing it.

While covering Russia’s horrific aggression in Ukraine, there is a real focus—as there always should be—on civilian victims of war. Today, the focus on that essential aspect of the Russian invasion is prominent and continuous—from civilian deaths to the trauma felt by civilians as missiles strike nearby.

Unfortunately, there was virtually no focus on civilian death and agony when it was the U.S. military launching the invasions. After the U.S. invaded Iraq in 2003 on false pretenses—made possible by U.S. mainstream media complicity that I witnessed firsthand—civilian deaths were largely ignored and undercounted through the years.

Shortly after the U.S. invaded Afghanistan in October 2001, leaked directives from CNN‘s management to its correspondents and anchors showed that the network was intent on playing down and rationalizing the killing and maiming of Afghan civilians by the U.S. military. One memo instructed CNN anchors that if they ever referenced Afghan civilian victims, they needed to quickly announce to their audience: “These U.S. military actions are in response to a terrorist attack that killed close to 5,000 innocent people in the U.S.” Such language was mandatory, said the memo: “Even though it may start sounding rote, it is important that we make this point each time.”

A few weeks after 9/11, what CNN viewer had forgotten it?

Noting the cursory U.S. television coverage of Afghan civilian casualties, a New York Times reporter wrote: “In the United States, television images of Afghan bombing victims are fleeting, cushioned between anchors or American officials explaining that such sights are only one side of the story. In the rest of the world, however, images of wounded Afghan children curled in hospital beds or women rocking in despair over a baby’s corpse, beamed via satellite by the Qatar-based network, Al Jazeera, or CNN International, are more frequent and lingering.”

The near-blackout on coverage of the civilian toll continued for decades. In April of last year, NBC anchor Lester Holt did a summing-up report on Afghanistan as “America’s longest war” by offering one and only one casualty figure: “2300 American deaths.” There was no mention of the more than 70,000 Afghan civilian deaths since 2001, and no mention of a U.N. study that found in the first half of 2019, due mostly to aerial bombing, the U.S. and its allies killed more civilians than the Taliban and its allies.

As the war on terror expanded to other countries, U.S. mainstream media remained largely uninterested in civilian victims of U.S. warfare and drone strikes.

Invasions and military force by one country against another are clearly illegal under international law, unless conducted in true self-defense (or authorized by the U.N. Security Council). In coverage of Russia’s invasion of Ukraine, U.S. mainstream media have correctly, repeatedly, and without equivocation, invoked international law and declared it illegal. As they did when Russia invaded Crimea in 2014.

By contrast, when the U.S. illegally invaded or attacked country after country in recent decades, international law has almost never been invoked by mainstream U.S. media. That was surely the case in the lead-up to the Iraq invasion—unlike in Britain, where major media prominently discussed the reality that invading Iraq would be a crime against international law unless authorized by a U.N. Security Council resolution. On a BBC television special six weeks before the invasion, for example, Tony Blair was cross-examined on that point by antiwar citizens.

In 1989, when the U.S. invaded Panama in perhaps the bloodiest drug bust in history, mainstream U.S. media made a determined effort to ignore international law and its violation—as well as the slaughter of civilians.

As a lifelong opponent of imperialism, I’m also indignant that a powerful country like Russia is using force to try to impose its will and its own chosen leadership on the Ukrainian people.

But I’ve never heard O’Donnell or anyone at MSNBC denounce U.S. imperialism. Indeed, the existence of something called “U.S. imperialism” is so adamantly denied by mainstream U.S. media that the phrase doesn’t appear in print without scare quotes.

This stubborn unwillingness to recognize U.S. imperialism persists despite the fact that no country (including Russia) has come close to ours in the last 70 years in imposing its will in changing the leadership of foreign governments—often from good to bad (for example, Iran in 1953; Guatemala in 1954; Congo in 1960; Chile, in 1973; Honduras in 2009).  Not to mention other U.S.-led regime changes (for example, Iraq in 2003 and Libya in 2011).

This denial persists despite the fact that our country maintains more than 750 military bases in nearly 80 foreign countries (Russia has about 20 foreign bases in a half-dozen countries); that our military budget dwarfs that of every other country (more than 12 times larger than Russia’s); that the U.S. provides nearly 80 percent of the world’s weapons exports—including weapons sales and military training to 40 of the 50 most oppressive, anti-democratic governments on earth.

Speaking of U.S. imperialism, former Secretary of State Hillary Clinton has been all over the news in recent days commenting on Ukraine and accurately denouncing Putin as anti-democratic. But her commentary reeks of hypocrisy on many grounds; one is her key role, largely ignored by mainstream U.S. media, in enabling the violent military coup regime that replaced elected Honduran President Manuel Zelaya in 2009. (You can read about it here and here.)

So as we rally to support Ukrainian civilians against great-power aggression from Russia, let’s do so with the understanding that imperialism should always be opposed, that all civilian victims of wars and violent coups are worthy whether Iraqi or Honduran or Ukrainian—and that all criminals who violate international law should be held accountable whether they’re based in Moscow or Washington, D.C.

This Article was first published in Common dreams on February 28 2022.

Jeff Cohen is an activist and author. Cohen was an associate professor of journalism and the director of the Park Center for Independent Media at Ithaca College, founder of the media watch group FAIR, and former board member of Progressive Democrats of America. In 2002, he was a producer and pundit at MSNBC. He is the author of “Cable News Confidential: My Misadventures in Corporate Media“ – and a co-founder of the online action group, www.RootsAction.org. His website is jeffcohen.org.