JENNIFER DOGGETT. Even with massive taxpayer hand outs private health insurance is in a death spiral.(Croakey 7.2.2020)

If private health care has a future within the Australian health system we need to find a better funding mechanism than PHI.  This means one that is sustainable, fair and efficient and designed to meet the needs of today’s health care consumers with chronic and complex conditions.

“Over the past two years, the factors threatening the sustainability of PHIs have only become more acute…..The Grattan Institute’s description of a “death spiral” may be dramatic, but it’s also pretty accurate,” Summerhayes said.

He went on to state that APRA’s immediate prudential concern is the rising disparity between growth in claims’ costs and premiums. On current trends, APRA’s analysis indicates that only three private health insurers will still have a sustainable business model by 2022.

Summerhayes also took the PHI sector to task for its ‘Oliver Twist’ response to the death spiral.

“We’re on the record expressing our disappointment about the industry’s progress responding to the sustainability challenge, with too many PHIs seemingly waiting for the Government to find a miracle cure,” he said.

He also gave a scathing critique of successive governments’ failure to address the fundamental problems with the current PHI model, including the most recent “gold, silver, bronze” changes introduced last year:

…historically, the main driver of membership growth in Australia’s private health system has been changes in government policy: the introduction of Medicare surcharge in 1997, the 30 per cent rebate in 1999, followed by Life Time Health Cover in 2000. The one constant with all these reforms is that any relief has been temporary, because none have tackled the root causes of the sustainability problem.

Even last April’s Government reforms, with a welcome focus on making the system more efficient and easier for consumers to understand, have so far failed to arrest the decline in coverage.”

Media reports of the speech focussed on Summerhayes’ predictions of forced mergers between funds.

In the tweet below, former PHIAC CEO, Shaun Gath, expressed some degree of caution in interpreting these predictions.

However, he endorsed Summerhayes’ concerns about the dependence of the PHI sector on ongoing government subsidies. 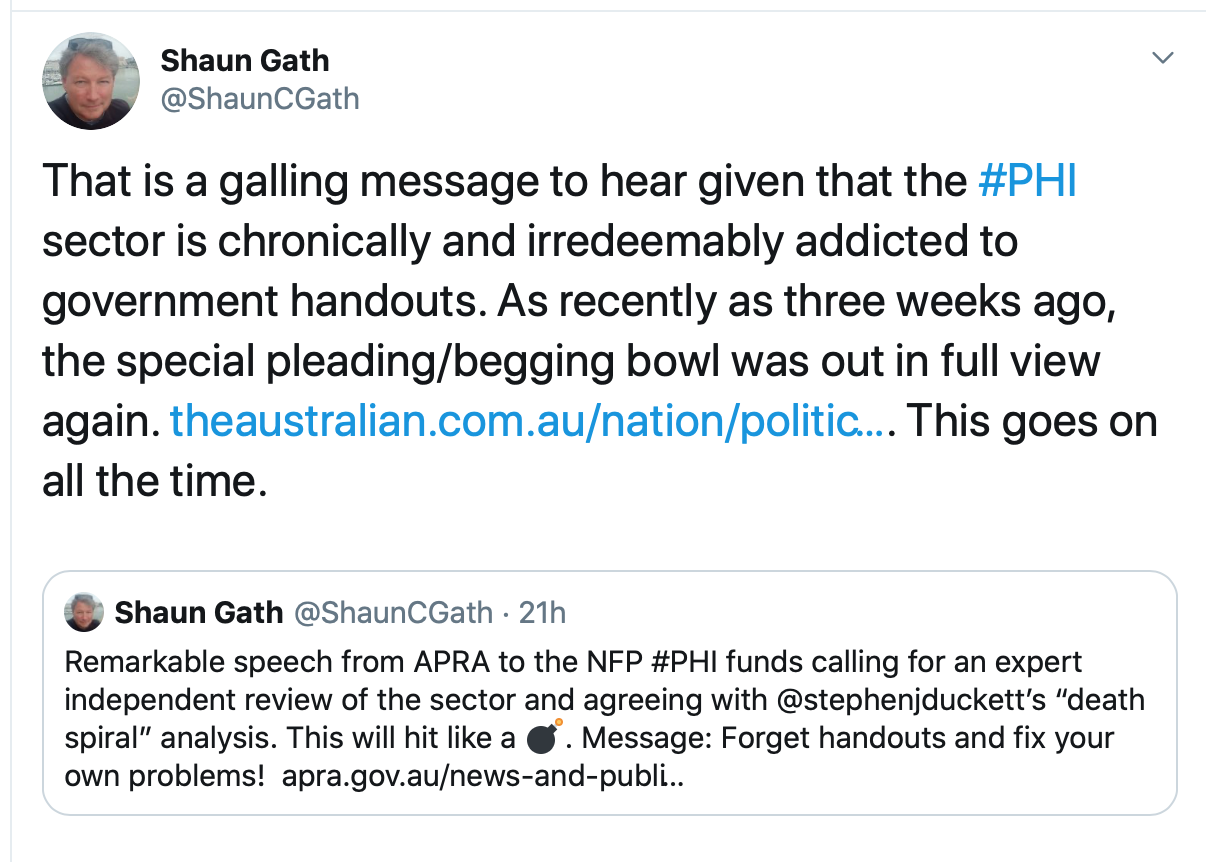 Call for an inquiry

In echoing the call by numerous experts and stakeholders for a review of PHI (and the private health sector more generally),  Summerhayes stated:

A new approach is urgently needed, and it must be a whole-of-industry response.

One option that APRA would support is an independent review of Australia’s private health insurance system led by appropriate qualified experts and involving all key stakeholders.

APRA believes that all key policy and regulatory settings should be up for discussion.”

This call was today supported by the Consumers Health Forum, with CEO Leanne Wells welcoming Summerhayes’ forthright comments. She said:

When its own regulator says a new approach is “urgently needed” it is time for the Federal Government to bite the bullet and launch a thorough inquiry into health insurance.

The Consumers Health Forum has for five years urged the Government to establish a Productivity Commission inquiry into government assistance of health insurance.”

Wells also noted that health funds continue to make profits for shareholders while many patients and families struggling with high out of pocket costs for private care are turning people away from insurance.

She described private health insurance as a “lose, lose” proposition for consumers, who pay “ever-increasing premiums” only to be exposed to further out of pocket costs when they need care.

The Australian Consumers Association also welcomed the call for an inquiry and has set up an online petition for consumers to sign in support of this proposal.

The need for a broader focus

While an inquiry into this sector is clearly overdue, it is important it focus not just on private health insurance but include a broader look at private health sector generally and its role within the Australian health system.

As Associate Professor Annette Schmeide from BUPA’s research foundation pointed out, many of the issues affecting PHI are systemic issues affecting health care more generally, particularly in the private sector.

An inquiry which is focussed just on ‘saving’ the current failed model of PHI will not address the fundamental problems within our current system and can only deliver the type of minor policy tweaks and superficial marketing strategies that have failed in the past.

The sort of inquiry needed is similar to the one proposed by Labor in the lead-up to the last election (although the issues paper Labor released on this topic did not reflect the broad scope originally suggested).

One priority for this inquiry should be to look at alternative funding models and options for transitioning away from PHI to a more sustainable and transparent funding mechanism.

Reversing this direction will require difficult conversations and even tougher decisions involving all the industry‘s major stakeholders, including Government, insurers, regulators, medical practitioners, hospital groups, as well as device manufacturers, pharmaceutical companies and of course the views of health fund members.

“All have a role to play in keeping the system affordable, accessible and sustainable, and no single stakeholder can fix the issues in isolation.”

This makes sense – with one caveat.  While of course all these groups need to contribute to the debate, the most important stakeholders on this (and any) health care issue are consumers (and this means ALL consumers). PHI is not just an issue for health fund members.

Australians without PHI are impacted by the inequities and inefficiencies of the current PHI system in many ways, for example through funding the subsidies and rebates of health fund members via their taxes and through the higher costs they face if they use private health services (due to its inflationary impact).

A ‘solution’ that privileges the needs of health fund members over other consumers ignores this fact.

If private health care has a future within the Australian health system we need to find a better funding mechanism than PHI.  This means one that is sustainable, fair and efficient and designed to meet the needs of today’s health care consumers with chronic and complex conditions. An inquiry which focusses on how to prop up the current failed model will simply prolong the death spiral and distract from this important goal.

Jennifer Doggett is a health policy analyst and consultant who has worked in a number of different areas of the health system, including the federal health department and the community sector, and as a political advisor on health policy. She currently works with the health provider industry and consumer groups on a range of health issues.