The question avoided by Kerr and the Palace ‘What does your Prime Minister say?’

In the rush to judgement on the Palace letters one image stands out – the early call, made  before the letters had even been released  – ‘the Queen was NOT informed!’. As if the entire cache of Palace letters could be read from just one letter, written by the key protagonist Sir John Kerr, after the event. 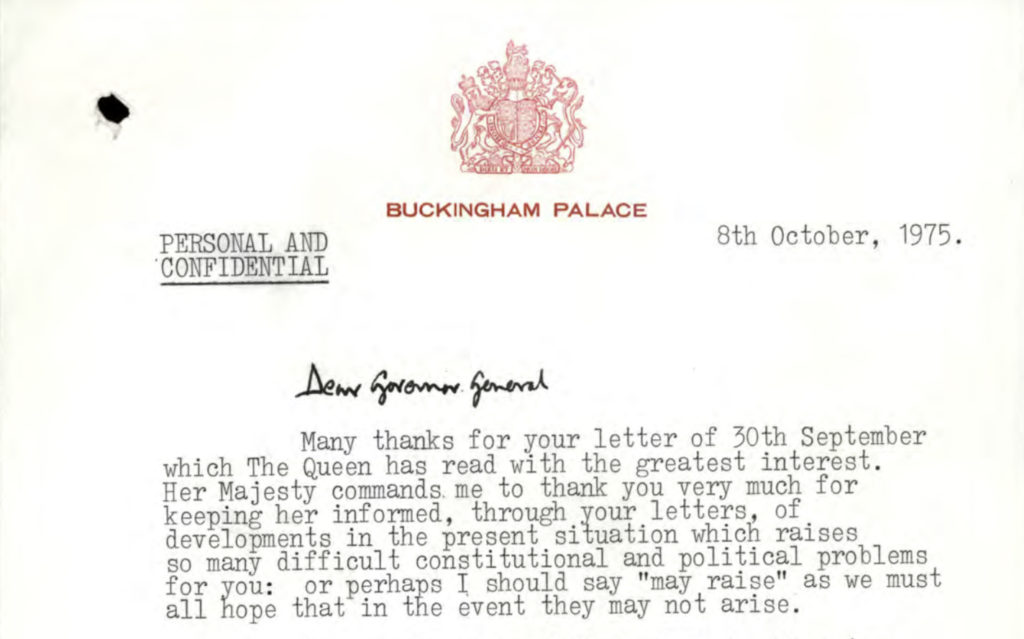 This instantaneous verdict reduced the Palace letters to the Royal equivalent of a gotcha moment, a headline in search of a story. It tells us nothing about the process through which Kerr reached his decision to dismiss Whitlam, seen in the correspondence prior to it, which is where the clear involvement of the Palace is to be found.

More sophisticated analyses, based on all the letters, understandably took slightly longer to emerge since they had 1200 pages to work through, not just two. Professor Chris Wallace concluded that the letters show the Queen, through her private secretary, ‘providing not just comfort but actual encouragement to the governor-general in his sacking of the government’. It is simply impossible to read these letters, their consideration of the use of the reserve powers to dismiss the elected government and dissolve the parliament, secret from the Prime Minister and against the advice of the chief law officers, and conclude otherwise. As Nick Feik in The Monthly archly observed, ‘No respectable historian’ could accept that the Queen played ‘no role’ in Kerr’s decision to dismiss Whitlam.

There are two key aspects relating to the dismissal which are dealt with very differently in the letters: their pointed discussions about the existence and possible use of the reserve powers on the one hand, and their scant consideration of the option proposed and finally acted on by Whitlam, the half-Senate election, on the other. This is the Palace letters at their most political, establishing a pathway to dismissal that unfolds from September 1975 when the possibility of the reserve powers enters their exchanges and the half-Senate election slides briefly into frame, only to slide out again just as quickly leaving barely a trace.

It begins with the Queen’s letter, through Charteris, of 24 September 1975 where the possible use of the reserve powers is raised. The most important part of which is Charteris’ hand-written addendum pointing Kerr to the work of Eugene Forsey, a Canadian expert on the reserve powers, and his ‘principle’ that ‘if Supply is refused that always makes it constitutionally proper to grant a dissolution’. What is most remarkable about this recommendation from Charteris, who was not a lawyer, is his choice of Forsey. Forsey’s knowledge of the Australian constitutional situation was such that he thought there was no such thing as a half-Senate election since, as the Canadian High Commission reported, he ‘could find no mention of such an election in the Australian constitution’.

Charteris’ recommendation of Forsey was not only inappropriate, it was also clearly directive. Forsey was a constitutional conservative, a strong proponent of the existence of the reserve powers and, in Charteris’ own words in a later letter to Kerr, a ‘stalwart upholder of the prerogative of the Crown’. In this brief aside, Charteris had pointed Kerr to someone with a very particular conception of the reserve powers as both extant and relevant, a view not shared by Kerr’s constitutional advisors the Australian law officers and the Prime Minister, and which provided a theoretical validation for dismissal.

Charteris’ letter was in response to a letter from Kerr of 12 September 1975, speculating on what Whitlam ought to do if Supply was blocked in the Senate. What is significant is that Kerr canvassed only two possibilities: an election of the House of Representatives or a double dissolution. As a list of the Prime Minister’s options, it is incomplete and disingenuous. In his politically charged description of Whitlam as possibly ‘toughing it out’ and ‘refusing to recommend a dissolution’, Kerr fails to mention as an option the one election which Whitlam had indicated he would most likely call if Supply was blocked, the half-Senate election.

Two weeks later, on 30 September, Kerr raises the prospect of a half-Senate election, telling Charteris that this is ‘another tactic’ which Whitlam ‘is trying out publicly’. The language is intemperate and telling, since the timing of the half-Senate election is constitutionally determined and it was due at that time. Kerr raised only possible problems with this ‘tactic’, which at that stage was largely speculative since supply had not yet been blocked. While Kerr detailed Whitlam’s inchoate provisional strategy, based on their private conversation about possible courses of action if supply was blocked, he fails to engage with the government’s actual decision on 16 October 1975, the day supply was blocked, that if this continued then Whitlam would call the half-Senate election at a time of his choosing.

The government’s intention was publicly announced and widely discussed, as was the expectation that the Governor-General would have no option but to act on that advice. Yet, in a confusing and contradictory letter the following day, Kerr repeatedly presents the half-senate election as a ‘tactic’, a ‘possibility’ beset by hypothetical difficulties, even suggesting Labor ministers were concerned about ‘violence in the streets’, before conceding that the ‘Prime Minister’s tactics’ were to continue to seek supply and to call the half-senate election ‘in due course’. Kerr also tells Charteris that Whitlam had decided ‘that the Senate must reject supply outright before he will call an election of any kind’, which was simply untrue. The nub of the problem in this miscast political narrative can be seen in Kerr’s acknowledgment that he had not spoken to the Prime Minister about it.

The desultory consideration of the government’s response to the deferral of supply, a course of action on which Kerr knew he would be bound to accept the Prime Minister’s advice, reflects the selective and highly politicised nature of the letters. Although Kerr writes that he is providing the Queen with the real picture, he does no such thing. Kerr did not tell Charteris that he had received the joint advice of the law officers on 6 November advising that there was no basis for the use of the reserve powers which, the Attorney-General Kep Enderby told Kerr in even stronger terms, he did not believe existed. Nor did Kerr tell Charteris that Whitlam had advised him on 6 November that he would call the half-Senate election on 11 November 1975 if supply had not then been passed.

These letters reveal the Queen engaging in consideration of the most controversial and quintessential political matters secret from the Australian Prime Minister, canvassing the refusal of the Governor-General to follow the advice of the Prime Minister, the use of the reserve powers against that advice, and the dismissal of the government which retained its clear majority in the House of Representatives. For a constitutional monarch who must remain ‘politically neutral’ at all times this was, as Mungo MacCallum describes, unconscionable. And missing from it all is the one critical question which Kerr never answers and Charteris never asks, ‘What does your Prime Minister say?’.

Jenny Hocking is emeritus professor at Monash University, Distinguished Whitlam Fellow at the Whitlam Institute at Western Sydney University and award-winning biographer of Gough Whitlam. Her latest book is The Dismissal Dossier: Everything You Were Never Meant to Know about November 1975 – The Palace Connection. You can follow Jenny on Twitter @palaceletters.

This entry was posted in Politics, Top 5. Bookmark the permalink.