In mid-February the number of cases of COVID-19 in South Korea suddenly increased and there are now over 5,000 confirmed cases. As a result South Korea has instituted containment strategies, designated clinics for mass screening and established over 200 public relief hospitals. How does Australia’s response compare?

Last week, like many around the world, I was alarmed by the sudden increase in COVID-19 cases in South Korea. Everything I saw and heard seemed surreal. Every piece of news was ‘breaking’. I was confused, worried and distracted.

The number of confirmed cases had been relatively low and contained to people who have been travelling in the Chinese epicentre of the outbreak. But things changed dramatically on 18 February when patient #31, a 61-year-old female from Daegu, the nation’s fourth largest city,  appeared on the Korean Centres for Disease Control and Prevention (KCDC)’s daily briefing. Patient #31’s whereabouts during the previous two weeks were made public.

The Kakao app (Korea’s most popular messaging platform) buzzed with rumours and concerns about anyone who may have crossed paths with patient #31 over the previous two weeks. Two days later came news of a mass outbreak in Daegu, centred on the Shincheonji Christian religious cult. Daegu was in shock.

The numbers infected increased exponentially. On 24 February, there were 763 confirmed cases. Today, the number is more than 5,000. More than 70% of the cases are clustered around Daegu, and more than 50% are affiliated with Shincheonji. 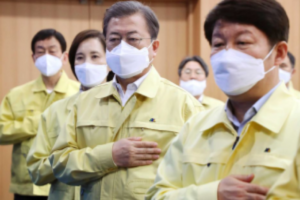 In Korean, the technical word for containment, ‘bongswei’, is a word more widely used to mean lockdown. A spokesperson for the ruling party tried to appease the outraged citizens by repeatedly emphasising that they were referring to a ‘containment’ strategy in outbreak control, not regional lockdown. Perhaps they were actually referring to a lockdown. But it is only one of many containment strategies.

More than 100,000 people have been screened in South Korea to date. The country can currently run 15,000 diagnostic tests per day. Since January, KCDC quickly established guidelines for real-time reverse transcription polymerase chain reaction (rRT-PCR) diagnostic testing. After consulting over the hotline, a concerned citizen can visit one of the 595 designated clinics to test for COVID-19, some state-owned and some private. Test results are confirmed within 12 hours. KCDC is working with pharmaceutical companies to develop and approve commercial testing kits.

If you are seeking medical help, you are directed to visit one of the 220 healthcare facilities that are designated as public relief hospitals. Despite widespread public criticism that health authorities failed to initially containment of the outbreak, the response has probably been as effective as it could have been.

Overseas, many have commended the effectiveness of the Korean response system, particularly for rapidly testing a large number of cases and transparent reporting. Other developed countries have yet to impose complete travel bans in relation to Korea, which in itself shows a level of international trust in Korea’s response.

Lessons learned from MERS may be helping

The South Korean COVID-19 response is largely the result of painful lessons learned during the Middle East Respiratory Syndrome (MERS) outbreak in 2015. Nobody knew what to do, despite doing what they could. The spread of the virus exceeded the response efforts. Following the MERS outbreak, the government formally reviewed the response and developed a national protocol for a respiratory infectious disease outbreaks. In addition to resourcing fast and large scale diagnostic tests, other actions in the protocol include:

The KCDC has maintained a constant flow of information. The KCDC director, Jeong Eun-kyung, gives a 40-minute daily press briefing at 2 pm and answers questions from reporters. She starts with an update on the latest numbers – see an example in translation below. To some, this may look like just another table. To me, this is an extraordinary output of a highly intricate nation-wide management system, with tens of thousands of healthcare workers, bureaucrats, and volunteers contributing to its daily update.

Alerts are transmitted to your phone once you enter an area where confirmed cases have visited, notifying you to take extra precautions. Drive-through testing clinics have been set up and you can get tested in 10 minutes.

University students have developed a website and app to show the locations of locations that confirmed cases visited prior to their diagnosis. Koreans can be quick, clever and innovative. 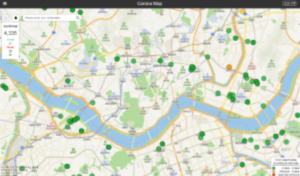 I have faith in the Korean public sector, based on my first-hand experience. I have worked closely with the Korean public health system over the course of the past 15 years, three of which I was employed as a part-time staff in local government in Seoul. I developed an appreciation for civil servants in Korea. If there was a heavy snowfall, we got shovels out of storage rooms to clear the snow. During elections we were recruited to count ballots. We had annual drills to prepare for national crises (war with our northern neighbour remains a fact of life).

As part of these drills I would receive a phone call at 5am instructing me to immediately report to the office. We followed protocols for various war-like scenarios. As much as I thought these activities were not really part of my job, and I complained about them more than I should have, this is what has enabled Korea to respond quickly to the COVID-19 outbreak. In a sense we have a reserve army of bureaucrats who are equipped to play active roles in times of national need.

When I tune into the news from home, I spot colleagues I’ve worked with running around in the background during press conferences and media coverages. I watch my colleagues giving expert analysis on media outlets and read their commentaries. I can only imagine how many more colleagues are hard at work behind the scenes. My former boss came out of retirement to respond to the call for health care staff shortage in her hometown of Daegu. Based on her experience at the forefront of the MERS outbreak in 2015, she knew that outbreaks need not only healthcare workers, but also administrative and bureaucratic support.

How prepared is Australia?

Last Thursday the Prime Minister, Scott Morrison, showed a document to reporters, saying that Australia has an emergency action plan for COVID-19. Having a plan was perhaps the best response until yesterday, when the cases were confined to those contracting the virus from overseas. If the situation turns out to be anything like what is happening in South Korea, the number of people infected can spike from 30 to 6,000 in a fortnight.

Once COVID-19 starts spreading in the Australian community (as may be beginning to happen), we must remember that this is not a drill. The government would have to take immediate action to establish institutions to inform, test, diagnose and treat the community and patients. Decisions will be made in real-time, based on limited information and high levels of uncertainty.

Watching my home country systematically respond to the outbreak, I wonder how prepared Australia is. Does everyone know exactly what their roles will be, particularly in the health system beyond public health and infectious disease specialties? Where will the testing clinics and diagnostic labs be set up? Will we be quick enough to minimise spread from undetected infections? Will data be produced and shared in time with the people who need to make decisions about resource mobilisation and control? How is general practice and primary care being meaningfully engaged in the response?

Despite the high number of confirmed cases in South Korea, the number of deaths from coronavirus remains relatively low. Italy and Iran have both had fewer confirmed cases than South Korea, but they have had more deaths. Korea has generally detected cases quickly enough to minimise spread and to prevent cases from becoming more severe, but the Korean health care system has also invested in widespread capacity to respond to respiratory disease outbreaks.

From overseas the South Korean early response may seem successful, however the country is more divided than ever. A petition for impeachment of the president for failure to effectively manage the outbreak response has over 1.4 million signatures. North Korea launched missiles (again). The leader of the Shincheonji cult gave a bizarre statement   statement on Monday.

Schools and universities are closed for three weeks. The Catholic church suspended all masses across the country for two weeks, for the first time in its 236-year history. Other religious groups have followed suit. The government advised citizens to postpone social gatherings until the outbreak is under control. Local markets and businesses are temporarily closed. The travel industry is at the brink of bankruptcy. Health care workers and response staff are all experiencing burnout. There are not enough negative-pressure hospital rooms to keep up with the increasing number of cases. Public panic and fear is widespread.

My Australian colleagues keep asking me how concerned I am about the outbreak in South Korea. In spite of the 600 new cases every day I would rather be there, than in a country where one or two cases sporadically pops up, because the response has been immediate, coordinated and meaningful. Experts predict a global spread is no longer a matter of ‘if’, but ‘when’, and we’re now seeing first signs of community transmission.

It is now my turn to ask my Australian colleagues how concerned should you be? Do we have the plans, institutional trust and social conventions to get us through? The consequences of any perceived mishandling of the COVID-19 response could be severe, especially coming so soon after the national bushfire emergency of last summer.

Jinhee Kim is a Scientia PhD Scholar at UNSW in Sydney, Australia. She occasionally does paid consultancy work for the Korea Institute of Health and Social Affairs. In the past, she has been worked for and with various government institutions in Korea at local, regional and national levels.

This article was originally published in Croakey on 4 March 2020.

This entry was posted in Asia, Health. Bookmark the permalink.