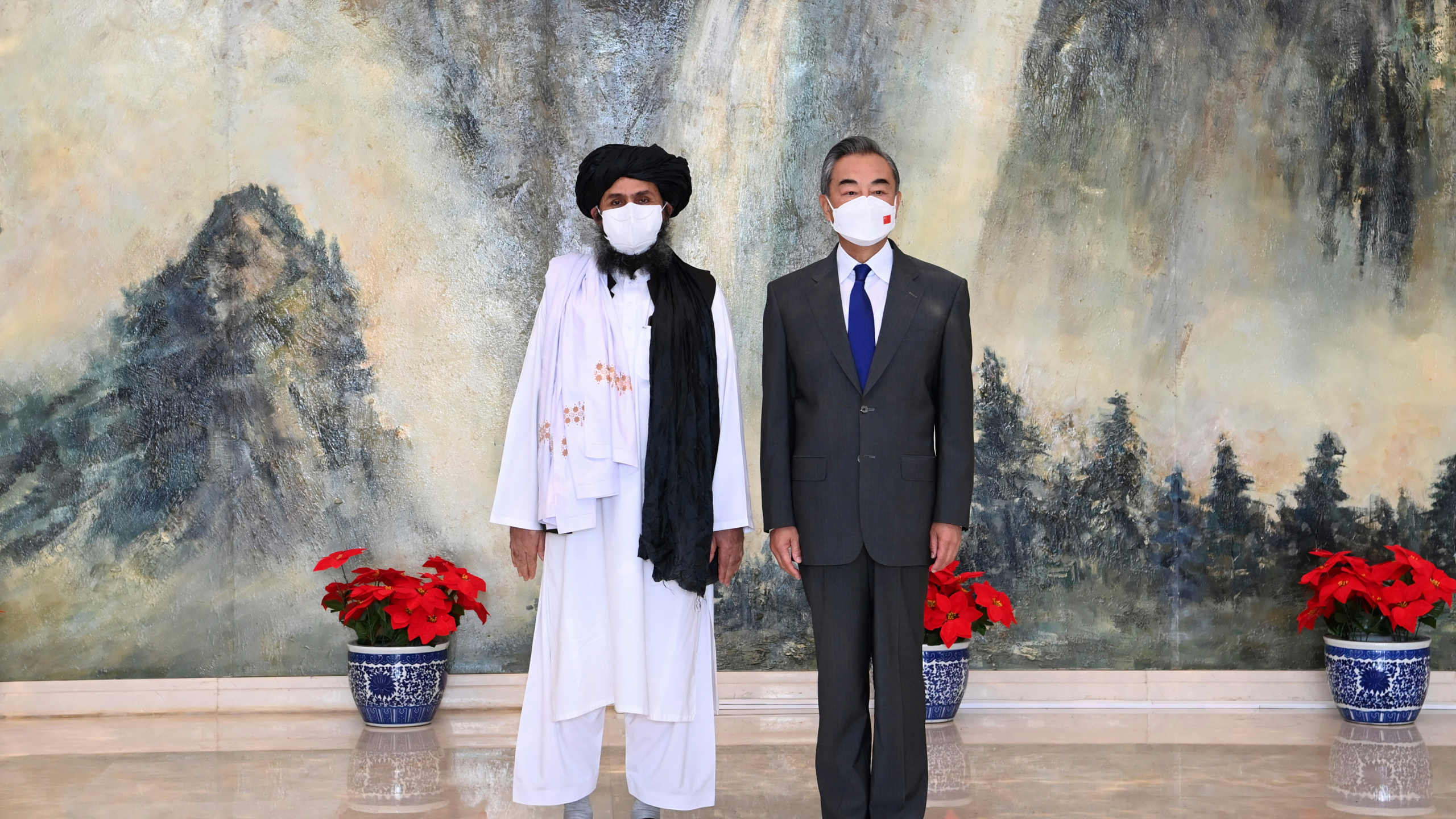 FILE - In this July 28, 2021, file photo released by China's Xinhua News Agency, Taliban co-founder Mullah Abdul Ghani Baradar, left, and Chinese Foreign Minister Wang Yi pose for a photo during their meeting in Tianjin, China. China has expressed a willingness to hold talks with the U.S. to promote a “soft landing” in Afghanistan, while heavily criticizing Washington and again demanding that the Biden administration halt its attacks on China. (Li Ran/Xinhua via AP, File)

The Chinese government has deep concerns about security on its western borders following Taliban success in Afghanistan. China and the US share an interest in ensuring that the incoming Taliban government does not foster Islamic extremism and export it to its neighbours. Both countries have significant relationships with Pakistan, which is the major patron of the Taliban. It would be good to see them seize this opportunity to strengthen cooperation, and this might perhaps lead to other avenues to improve relations.

Australian commentators, both journalists and former foreign ministers, seem oblivious to these emerging opportunities. According to Peter Hartcher’s op-ed this week, Kevin Rudd thinks that Beijing will exploit the US withdrawal from Kabul, because it sees it as “a level of strategic softness.” Such negative spin should not be allowed to influence decisions in Canberra in response to the crisis in Afghanistan.

Anyone who has been following Chinese affairs could tell you that Beijing leaders have been focussed on worsening security in Central Asia for some time. These concerns outweigh those about Taiwan, Japan or neighbours to China’s east or south. Chinese aid workers were killed in July in a suicide attack on a bus taking staff to a dam construction site in northern Pakistan. The level of Chinese concern can be gauged from the extensive anti-terrorism exercise that China and Russia conducted this month in Ningxia in north-west China, involving advanced weapons and live-fire, and from a separate exercise in which China and Tajikistan engaged in joint anti-terrorism drills outside Dushanbe.

China has steadily increased security and surveillance along its borders with Pakistan and Afghanistan in recent years, in an attempt to put a stop to the activities of radical Islamic elements that have exerted increasing influence in Xinjiang Province. This fundamentalism may well have been promoted by the Taliban. It partly explains the detention and de-radicalisation of the Uighur community that has been rightly denounced in the West.

In spite of increased border security, there is ongoing daily contact across the Pakistan border, often disguised as trade. Travellers and their goods are subject to strict border checks, but, even ten years ago, when I last passed through Kashgar in southern Xinjiang, I saw Pakistani traders who clearly had links with Afghanistan since they offered typical Afghanistan products such as saffron and other herbs and spices much in demand in China, as well as rare Himalayan animal skins such as snow leopards. On their return journeys, they carried Chinese manufactures such as electronics and household goods.

Concerns about border security and the threat from Islamic fundamentalism led to Chinese Foreign Minister Wang Yi hosting a delegation from the Taliban in China in late July, recognising them as “an important military and political force,” while urging them to address Chinese security concerns. These same concerns determined Beijings decision this month to maintain its embassy in Kabul, when Taliban forces occupied the city. On 16 August, Chinese Foreign Ministry spokesperson Hua Chunying said China hoped to ensure “a smooth transition of the situation in Afghanistan, keep at bay all kinds of terrorism and criminal acts, and make sure that the Afghan people stay away from war and can rebuild their homeland.”

Yun Sun, China expert at the Stimson Center, says that China has “a reluctant embrace” with the Taliban, for several reasons. This is not surprising since, according to UN sources, there are several extremist groups that have been fighting alongside the Taliban, including Al-Qaeda and the East Turkestan Islamic Movement (ETIM), which aims to create a separatist Uighur state in Xinjiang. China would have preferred to negotiate with the Taliban while it was still gathering strength and would have been more open to cutting deals, not now that it has acceded to power and can set its own agenda. Claude Rakisits provides a good summary of all these concerns in Australian Outlook.

In all of this, Pakistan is seen by China as key to limiting the spread of Islamic militant fundamentalism. China has enduring friendly relations with that country, having long supported its nuclear development program. Pakistan is key to China’s Belt and Road plans to link East Asia with the oil fields of the Middle East and access to European markets. The major border crossing on China’s western boundary is the Karakorum Highway, built in the 1950s. Even though the Khunjerab Pass lies 4,700 metres above sea level, it is open most of the year. Alternative routes through Tajikistan or Afghanistan are equally high and traverse more difficult terrain, although they could be developed. The Wakhan Corridor, a natural valley following the course of the Panj and Pamir rivers in northeast Afghanistan, separates Tajikistan from Pakistan and may offer some potential. (This was very likely the route used by Marco Polo to reach China.  Its strategic importance was recognised by Britain and Russia in the times of the “Great Game”. Both countries maintained consulates in nearby Kashgar in southern Xinjiang Province for this reason up to the 1930s.)

Every country is concerned about border security.  Scott Morrison is proud of his record on border security. John Kennedy famously said, “You either believe in border security or you don’t.” Xi Jinping in his address marking the hundredth anniversary of the Communist Party of China in July this year said, “We will never allow any foreign force to bully, oppress, or subjugate us. Anyone who would attempt to do so will find themselves on a collision course with a great wall of steel forged by over 1.4 billion Chinese people.” This was not a threat to launch a war (the official translation differs markedly from the literal translation preferred by many journalists “will face broken heads and bloodshed”, which is about as violent an expression as the English phrase “heads will roll”). It was a statement that China would not brook foreign interference, particularly if it breached what is regarded as national integrity or imported fundamentalism.

Surely this is in everyone’s interests.