The cover-up has to stop – and with it, the huge sums in aid for a country with oppressive policies towards Palestinians.

Every recent US administration has performed a perverse ritual as it has come into office. All have agreed to undermine US law by signing secret letters stipulating they will not acknowledge something everyone knows: that Israel has a nuclear weapons arsenal.

Part of the reason for this is to stop people focusing on Israel’s capacity to turn dozens of cities to dust. This failure to face up to the threat posed by Israel’s horrific arsenal gives its prime minister, Benjamin Netanyahu, a sense of power and impunity, allowing Israel to dictate terms to others.

But one other effect of the US administration’s ostrich approach is that it avoids invoking the US’s own laws, which call for an end to taxpayer largesse for nuclear weapons proliferators.

Israel in fact is a multiple nuclear weapons proliferator. There is overwhelming evidence that it offered to sell the apartheid regime in South Africa nuclear weapons in the 1970s and even conducted a joint nuclear test. The US government tried to cover up these facts. Additionally, it has never signed the nuclear non-proliferation treaty.

Yet the US and Israeli governments pushed for the invasion of Iraq based on lies about coming mushroom clouds. As Israeli nuclear whistleblower Mordechai Vanunu said: the nuclear weapons were not in Iraq – they are in Israel.

Amendments by former Senators Stuart Symington and John Glenn to the Foreign Assistance Act ban US economic and military assistance to nuclear proliferators and countries that acquire nuclear weapons. While president, Jimmy Carter invoked such provisions against India and Pakistan.

But no president has done so with regard to Israel. Quite the contrary. There has been an oral agreement since President Richard Nixon to accept Israel’s “nuclear ambiguity” – effectively to allow Israel the power that comes with nuclear weapons without the responsibility. And since President Bill Clinton, according to the New Yorker magazine, there have been these secret letters.

US presidents and politicians have refused to acknowledge that Israel has nuclear weapons even though the law offers an exemption that would allow the funding to continue if the president certified to Congress that aid to a proliferator would be a vital US interest.

Israel’s per capita gross domestic product is comparable with that of Britain. Nevertheless, US taxpayer funds to Israel exceed that to any other country. Adjusted for inflation, the publicly known amount over the years is now approaching $300bn.

This farce should end. The US government should uphold its laws and cut off funding to Israel because of its acquisition and proliferation of nuclear weapons.

The incoming Biden administration should forthrightly acknowledge Israel as a leading state sponsor of nuclear proliferation in the Middle East and properly implement US law. Other governments – in particular South Africa’s – should insist on the rule of law and for meaningful disarmament, and immediately urge the US government in the strongest possible terms to act.

Apartheid was horrible in South Africa and it’s horrible when Israel practises its own form of apartheid against the Palestinians, with checkpoints and a system of oppressive policies. Indeed another US statute, the Leahy law, prohibits US military aid to governments that systematically violate human rights.

It’s quite possible that one of the reasons that Israel’s version of apartheid has outlived South Africa’s is that Israel has managed to maintain its oppressive system using not just the guns of soldiers, but also by keeping this nuclear gun pointed at the heads of millions. The solution for this is not for Palestinians and other Arabs to try to attain such weapons. The solution is peace, justice and disarmament.

South Africa learned that it could only have real peace and justice by having truth that would lead to reconciliation. But none of those will come unless truth is faced squarely – and there are few truths more critical to face than a nuclear weapons arsenal in the hands of an apartheid government.

This article has been republished from The Guardian 1 January 2021. 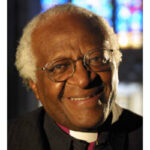 Desmond Tutu, a Nobel peace laureate, is a former archbishop of Cape Town and, from 1996 to 2003, was chair of South Africa’s Truth and Reconciliation Commission