JOHN WILLOUGHBY. Reflections on the average health of average people

I’m writing this, in the concluding years of a career in neurology and neuroscience, concerned for humanity. What do I conclude about the human condition at this time? In a nutshell: we are what we are: overbreeding mammals headed for a population crash as we over-consume the world we live in.

The plot below shows an actual population crash. It is deer numbers over 22 years between the founding of a deer colony on an island, until its near demise. Multiple factors led to distressing deaths in distressing numbers: too many deer, too little available forage, poor prior health due to inadequate nutrition and, finally, a burst of freezing weather. See here

What about humans? Here is a plot of human population on our ‘island earth’, from Our World in Data. 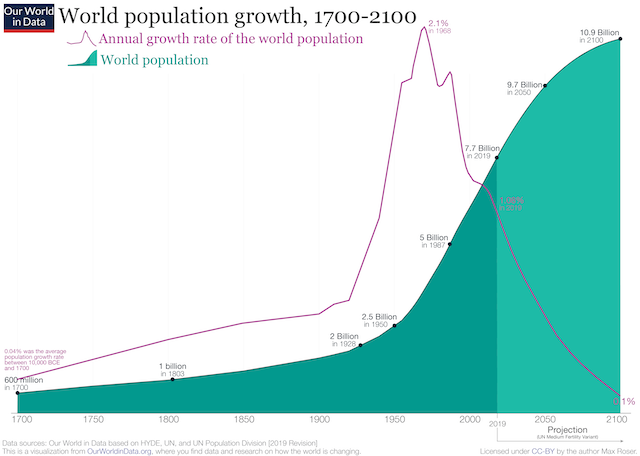 Given the rising population, we are motivated to ask “… and what happens next?”. One answer may be “something like what happened to St Matthew Island deer”. Without more food and, even with less begetting, this graph raises, in my mind, the likelihood of a population crash: deaths will be due to starvation and its consequences, ill-health (infectious disease) and social discord (war) and, now, an additional factor, like exacerbation of all these factors by climate change.

It’s obvious why we beget children – it’s what we do, otherwise, there would be none of us. What we also do, for ourselves and for our children, is utilise resources. Essentially, by using and acquiring resources, we increase our own security and improve the prospects of having and protecting our children. Here, for example, is our use of one resource, fossil-fuels, over the last 150 years).  It corresponds to the population increase over the same period and is, presumably, driven by it. 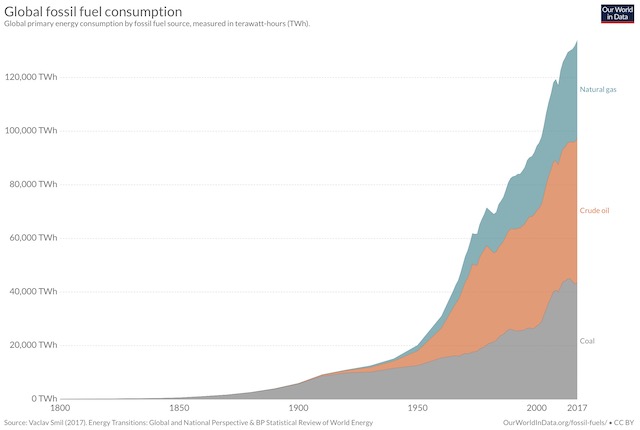 We exist because our own human ancestors were successful in controlling their resources and reproducing. Children mark success in the chain of life. The stronger our male ancestors were, the more resources they controlled, the more partners they had and the more it was their children that contributed to the chain of life of which we are a part. Evolution has always favoured those who left the most offspring: this fact defines evolution. Putting it bluntly: those more exploitative of the Earth’s resources and of child-bearing partners, helped them make a contribution to the kinds of people we are right now. This explains a lot, for example: the widespread subjugation of women. We are the outcome of hundreds of thousands of years of winners controlling more resources and having more offspring. Those who didn’t successfully compete, didn’t leave children to contribute to whom we are. We go into our lives carrying our share of the genetics of the winners, behaving in the same way – acquiring resources and reproducing – that’s what humans have always done and that’s what we still do.

In the competition for resources, two very different strategies suggest themselves: cooperate with a group of people, albeit, then share the gains, or, go it alone and keep everything. It seems to me that in these strategies, we see the beginnings of approaches to life categorised today as either ‘left-wing’ and ‘right-wing’. Other terms for left wing are: ‘socialist’, ‘pluralist’, ‘egalitarian’, ‘progressive’; other terms for right-wing are: ‘individualist’, ‘anti-pluralist’, ‘self-sufficient’, ‘conservative’. I’ll use ‘left-wing’ and ‘right-wing’ for simplicity. I’m not going to address the extremes in left- or right-wing behaviours and attitudes. Simplistically: people in left-wing communities share, assist others, think of the impacts of their behaviour on others and cooperate. People in right-wing competitive communities do what they can for themselves, compete, take responsibility for themselves and reject restrictions imposed by others on their behaviour.

What has distressed me in observing humans these days, is the different kind of influence left-wing and right-wing attitudes have had on the trajectory of humanity. Just look at global warming. We have people, often right-wing, who spend time arguing with thermometers !! (denialists) and there are people, often left-wing (environmentalists), deeply concerned. Help in understaniding tis standoff came to me from reading articles in paywalled neuoscience journals. I provide links to these sources because the abstracts are sometimes helpful. 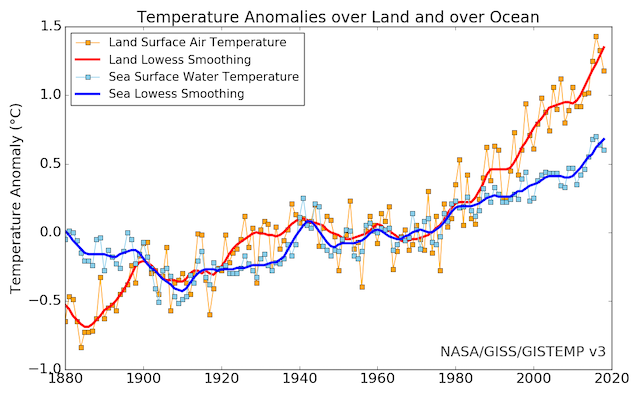 Some neuroscience: By measuring physiological markers of emotion and by using functional brain imaging (with EEG and MRI), studies have revealed remarkable average differences in activation patterns of people holding average left-wing or right-wing attitudes. I emphasise ‘average’ here: we all vary uniquely and, consistent with uniqueness, people’s attitudes on issues are not reliably predictable and brain imaging is characterised by surprises and variation. But, on average, there are clear trends.

Here’s a taste. First, people are scored on a left-wing to right-wing scale using answers to questions like “do you support same-sex marriage?”, “do you support gun control?”, “are you religious?” etc. Then the participants undertake an apparently mindless task in which they have to respond to a visual signal (briefly displayed on a monitor) by pressing a timer-button. They are given these instructions: “Look at the monitor. If you see “X” appear on the screen: hit the button. If you see “Y” appear on the screen, don’t hit the button”, all the while their brain activity is being recorded. In this test, “X” is very frequent, so the usual response to a letter appearing is to hit the button. When the very rare “Y” appears, the response is to withhold the usual action of hitting the button. [These kinds of tests are known as “Go, No-Go” tests.]

The results are clear: people who score as right-wing have less activation in regions do to with change-detection during the No-Go trials, than people who score as left-wing. You would be thinking: “responding to “X” and not responding to “Y” is NOT a political matter”. So, what are they thinking? Well, there are many studies demonstrating that people on the right of the political spectrum have stronger markers of emotional activation to unexpected change than people on the left. Given this, my interpretation is: while people on the right might respond less to the actual evidence that things have changed, they get more emotional (angry?) instead – a hypothesis that, as far as I can tell, remains to be tested!

There are other kinds of difference: people with left-wing attitudes have a larger anterior cingulate cortex, smaller right amygdala and smaller left insula, findings that correlate with levels of activity in these structures when they deal with information counter to their experience. The interpretation here is that people with left-wing attitudes think more deeply or differently when information is unexpected (anterior cingulate cortex), in contrast to people with right-wing attitudes whose responses are more emotional (amygdala, insula). So, there are interesting, different, brain networks activated in people having different political attitudes.

Feeding my own prejudices, Jost and colleagues summarise that death-anxiety, fear of threat or loss, intolerance of ambiguity, etc., were all associated with people having right-wing attitudes. Being open to new experiences, complexity, tolerance of uncertainty, and self-esteem were all features associated with people with left-wing attitudes. This from other authors: “ideology is not a superficial label or bundle of topical positions but rather is a central component of an individual’s general life orientations”.

My spin on all this: humans are humans; they do what they do; nothing will change most people: they are set up to be the way they are. The worriers should just give up. Maybe …

This is a hard question: what can one do, oneself, in this threatening situation? The situation humanity finds itself in is like being in a bus in which a majority decision has been made that we should drive the bus off a cliff. My answer is: one might as well go along for the ride because, although conflict might enable the rationalists to stop the bus, the act of having to resort to conflict simply sows the seeds for a more conflict. I think an answer to what we might do, therefore, is do things that matter to us and hope for the best.

Things that matter: It is a reality that we are consuming our environment and its resources (which equally mean our health). At every level I can think of, links-of-impact join our place in the world with the rest of biology. Our colons are full of bacteria that greatly benefit our health. Animals – we are variously wary of them, love them, eat them, bet on them, play with them or watch and enjoy them. We may also need to be reminded that a relationship with an animal prolongs our lives. Spiders, flies, ants, grubs, bees – we tend to avoid, but their beneficial impact on our lives is immeasurable – fertilisation of flowers of vegetables, or the cleansing function of these animals on decaying matter. Plants are stunningly interconnected with us. They provide our oxygen. Some we plant and harvest to eat or wear, some we plant just to admire, some we harvest for their beautiful timber, using the heart of the plant for constructing our houses or using in furniture. Other plants shield our homes from the wind or sun or cool our urban environment or cleanse our air.

What should we do? My spin: motivate for environmental protection at all levels, everywhere, and motivate for re-use of resources, and re-use of re-used resources – the so-called ‘circular economy’: nothing should be discarded.

While global population is a problem, birth rates are declining, almost entirely due to improved education of women, which, we hope, will continue. However, we’re still heading for a high maximum and we can’t cull humans. We’ll be culled by forces of nature. How to face this? If you have offspring, I think a goodplan is to live ethically, minimise your use of resources, be collegiate with fellow humans, promote workable solutions to issues when you find them, educate others and be educated by others, hope that things will change, but let go of expecting that things will change.

Given the potential impact of all this on children, if you don’t have off-spring, besides living ethically, I think a perfect plan is don’t have children. In the happy state of begetting no children, you can let your little twig of evolution die out – with no worries!

John Willoughby is Emeritus Professor of Medicine and Honorary Consultant Neurologist at Flinders University and Medical Centre, and a member of  Doctors for the Environment Australia.  A version of this article was initially prepared for the Flinders Medical Students Society magazine Placebo.