JULIE P SMITH. Live sheep exports are not worth the moral cost.

Growing up near Midland on the outskirts of Perth during the 1960s and 1970s, I endured the weekly stench from the local abattoir. It was the price we paid to get meat to population centres. My first job was in the local meat processing plant, working with people described as “salt of the earth, working class”, who had historically toiled in appalling conditions because they had no choice.

Pressured by unions over postwar decades, Australian governments eventually stepped in to enforce decent standards for work and wages. Compelled by those who saw the immense cruelty involved, animal welfare laws were also imposed. Meat industry employers objected to red tape and higher labour costs, but community standards were enforced, most operators complied, and the worst operators eventually left the business. 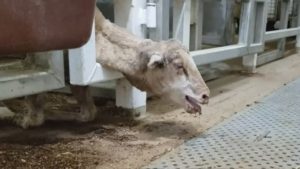 Meat became more expensive, but it was a price worth paying. Not every cost and benefit is financial.

That’s how it is now with the live sheep export industry. Until recently, only those working on the ships knew how bad its conditions were, and those who spoke up lost their jobs. With the terrible non-financial costs and risks now visible, are we willing to pay the financial cost of banning live sheep exports?

It’s a small and shrinking part of the Australian meat and livestock industry. It accounts for just $250 million of the $5 billion sheep-meat industry.

Ninety percent of sheep exports (including from Adelaide) leave from Fremantle, WA. In the west, mixed farming is the norm, and few rely on sheep. Live export business accounts for less than 1 percent of receipts.

The main industry player is one shipping company, Emanuel, which dispatches 1.7 million of around 1.9 million Australian animals transported each year. It pays around $8 a head more in the sale yards for lighter or worse-condition wethers. For some, it is a commercially attractive premium. Poor-condition sheep are less valued for local processing. Farmers naively expect their sheep to be well cared for.

The reality is that it’s a dying trade, in every sense of the phrase. The premiums derive from expensive and unsustainable food subsidy programs in the Middle East. These policies can involve unfair trade barriers, including to Australian meat exporters, and the potential for corruption in such protection regimes is well known. In Bahrain, when a budget crisis ended its subsidy program, live imports ended and were replaced by imports of Australian meat.

The expansion of Western-style supermarkets with refrigeration, and refrigeration in homes is making it easier. 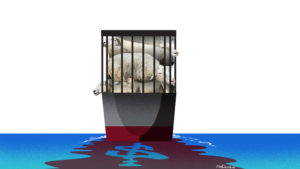 Australia’s competition in this unstable market includes Somalia and Sudan. These have low standards of worker and animal welfare, signalling a looming race to the bottom.

Western Australia’s processing industry has been on its knees for a decade, in part because throughput is insufficient to run anywhere near capacity. Local facilities could process 1.4 million more animals a year.

The light at the end of the tunnel for sheep producers is a growing export demand for Australian sheep meat. The export abattoirs are certified halal, although Gulf officials with business interests in subsidised local industries can create difficulties about credentials.

Australian meat producers have worked hard to develop a “clean”, “green” and “cuddly” reputation for Australian lamb. Live sheep exports are putting it at risk. Consumer boycotts are a real threat, in overseas as well as Australian markets.

Meeting Australian community standards has been intrinsic to the “social licence” issued to meat processors since that early postwar era. So, too, for live sheep exporters since the 1990s. Decent treatment, for workers and animals, has been part of the deal.

“Meat became more expensive, but it was a price worth paying. Not every cost and benefit is financial.”

It ought to be unnecessary to repeat the long history of concern about the cruelty of the live sheep export trade to the Middle East. The multiple, horrific examples are well documented. Vets say the trade is “not commercially viable” without animals suffering. A 1985 parliamentary inquiry concluded that live exports were inimical to good animal welfare. A 2003 review said all “higher risk voyages” – like this winter trade from Western ports – should be eliminated. The industry couldn’t afford more scandals. 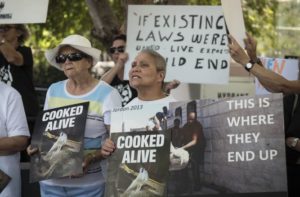 Sheep die in paddocks, but vastly more so in massive mobile ovens, and in the brutal marketplaces of the Middle-East.

If animals were forced to experience such cruelty onshore, those responsible would be subject to prosecution under Western Australian animal welfare laws. Ownership and legal accountability should not shift offshore as soon as stock are on board.

There is also growing scrutiny of mortality and cargo insurance arrangements. They reduce the incentive to improve on-board conditions and potentially impose the costs of poor practice on other insurance customers through higher premiums.

Until recently it’s been hard to count the costs of the “ships of shame”. The conditions on board were hidden from public view. Farmers have taken comfort from industry rhetoric about high standards of care. Now, assisted by modern technology, the truth is visible. We can all see what happens to the millions of Australian sheep dispatched from Fremantle every year.

Will there be anything left for Australian producers to be proud of by the time this business model dies? A recent study by Pegasus Economics estimates only around $9 million a year in price premiums (averaging $2000 per sheep farmer) would be lost to producers if the Fremantle sheep exports were banned. Twice as much could be gained by the boost to Australian meat sales.

Is it a price we are willing to pay, to end the horror?

From the ongoing public furore, and the evidence before our eyes, the answer appears to be yes. The costs are small, and the benefits for our own industry future are considerable.

This article was first published in The Age on the 21st of April 2018.

Dr Julie P. Smith is an associate professor and Australian Research Council Future Fellow at the Australian National University School of Global Governance and Regulation. Her research focuses on the economic valuation of breastfeeding and regulation of markets in mothers’ milk. After seeing a Four Corners documentary on the live export trade in 2011, she became a vegetarian.