KATE GRIFFITHS, CARMEL CHIVERS, DANIELLE WOOD. Influence in Australian politics needs an urgent overhaul – here’s how to do it (The Conversation, 23.09.18)

Public policy should be made for all Australians – not just those with the resources or connections to lobby and influence politicians. And mostly it is. But sometimes bad policy is made or good policy is dropped because powerful groups have more say and sway than they should.

Australia’s political institutions are generally robust, but many of the “risk factors” for policy capture by special interests are present in our system. Political parties are heavily reliant on major donors, money can buy access, relationships and political connections, and there’s a lack of transparency in dealings between policymakers and special interests.

A new Grattan Institute report, Who’s in the room? Access and influence in Australian politics, reveals that access and influence are heavily skewed towards the businesses and unions that have the most to gain (and lose) from public policy. 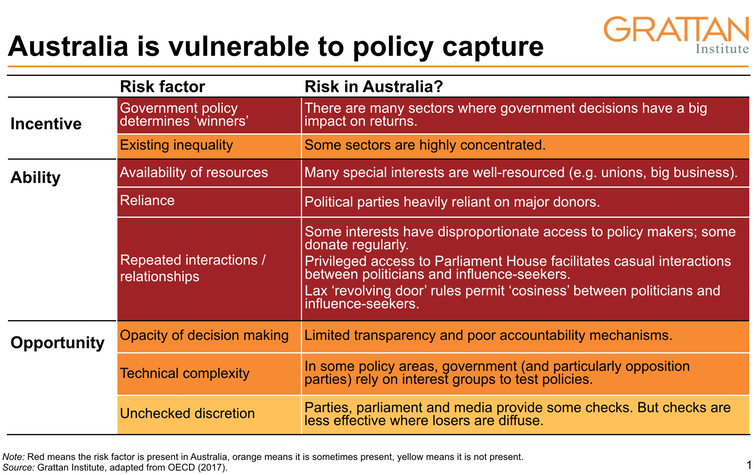 Many examples of special-interest influence over policy look contrary to the public interest: special deals for insiders (for example, James Packer’s Sydney casino), interest groups with a seat at the table in deciding how their own industry is regulated (such as pharmaceuticals pricing), and lobby groups blocking reforms that have broad support (such as climate change policy and pokies reforms).

Read more: Time for the federal government to catch up on political donations reform

Better checks and balances are needed. But the question of what to do about undue influence is tricky. Interests should be able to advocate for themselves, and donate money to support causes they believe in. Lobbying helps to introduce new ideas and reduce the likelihood of uninformed or damaging decisions by those in office. We propose a suite of reforms to reduce the risks of policy capture while still protecting the rights of all individuals and groups to contribute to policy discussions.

Transparency isn’t a silver bullet, but it can play an important role in reducing the sway of special interests. Greater transparency means more opportunity for the public, media and the parliament itself to scrutinise the policy-making process and call out undue influence or give voice to under-represented views.

Transparency is not enough on its own – strong voices are still needed to call out problems, and voters still need to hold elected officials to account. But transparency gives them better information to do so.

Trust in government is in decline: in a 2018 survey, 85% of Australians thought at least some federal MPs were corrupt. We recommend setting clear standards for all parliamentarians to avoid conflicts of interest – particularly around hospitality, gifts and secondary employment.

Codes of conduct for parliamentarians and lobbyists should be independently administered, to build public confidence that the high standards of public office are respected and adhered to. A separate ethics adviser could also encourage public officials to seek advice when they’re in doubt.

And a federal integrity or anti-corruption body should be established to deal with tips and complaints of serious misconduct. It should be empowered to investigate corruption risks, publish findings, and refer any corrupt activity to the Commonwealth Director of Public Prosecutions.

The best defence against policy capture is healthy public debate

Greater transparency and accountability would help reduce the risk of policy capture by special interests. But ultimately Australia’s best defence is countervailing voices in policy debates. Who’s in the room matters – but who’s not in the room can matter even more.

Consumers, community groups and those less privileged are consistently under-represented in public debate. Our analysis of ministerial diaries in Queensland and NSW shows well-resourced special interests account for the bulk of senior ministers’ external meetings.

People who lack the resources or organisational capacity to band together can struggle to be heard – even when they represent a large chunk of Australian society – taxpayers, consumers, small business and young people, for example. Special interests are particularly likely to win out in technical, niche or complex policy areas because they are more difficult for other groups, voters and the media to engage with.

We suggest two reforms to reduce the influence of well-resourced special interests and promote broader participation in public debate:

First, a cap on political advertising expenditure during election campaigns would reduce the imbalance between groups with very different means to broadcast political views. It would reduce the reliance of political parties on major donors and might redirect communication to less-superficial channels that are conducive to deeper discussion, such as political debates and interviews.

Read more: Australians think our politicians are corrupt, but where is the evidence?

Second, government can boost countervailing voices through more inclusive policy review processes and advocacy for under-represented groups. This would give politicians better information with which to adjudicate the public interest.

The reforms proposed here are in line with OECD recommended practice. They would strengthen Australian democracy by enabling voters to better hold government to account and could boost the public’s confidence that the system is working for them.