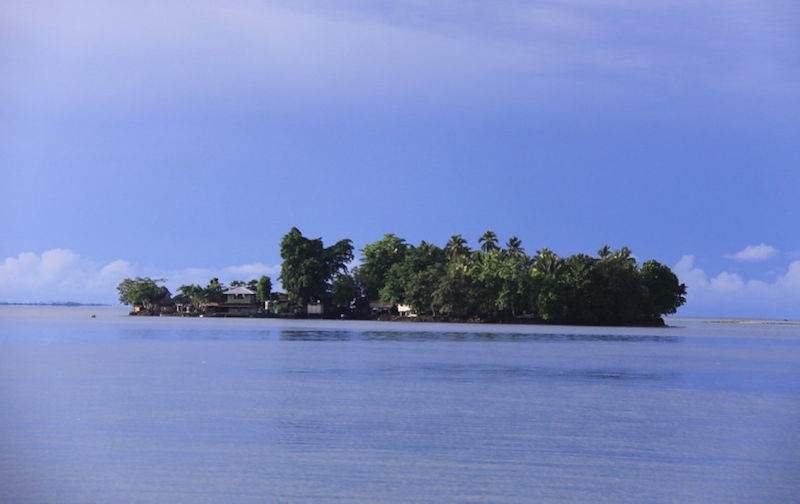 Scott Morrison claims to be Australia’s best defender. In reality he is its worst. His government’s subservience to local and international oligarchs has seen it neglect real interest in Australia’s long-term security and wellbeing.

In 2015 then Coalition Prime Minister Abbott and two of his Ministers, Peter Dutton and Scott Morrison, were caught by a rolling sound-camera joking about Pacific Islands being inundated by rising sea levels. These men, who as ministers consistently opposed any meaningful action or recognition of global warming and its consequences, were obviously fully aware that sea-levels were rising and knew of the disastrous effects on low-lying islands.

Fast-forward through almost a decade of falling Australian aid to Pacific countries (our ‘Pacific family’), except for crumbs if they act as gaolers to our unwanted refugees or as suppliers of semi-indentured farm labourers desperately trying to support their families back home. Responding to the rising sea levels, then Deputy Prime Minister , Peter Dutton, offered that Australia would ‘take’ more Islanders to work here as farm-labourers if their home-lands disappear under the sea, while the government has ignored reports of unexplained deaths and gross exploitation of labourers by labour-hire conglomerates – an exploitation of Pacific Island labourers not far different from Australia’s 19th century use of ‘indentured’ labourers from the same area. Do Coalition ministers think the Solomon Islands government does not recognise the racism and condescension underlying the offer of such ‘aid to our Pacific family.’

The present government of Scott Morrison has failed to provide either sufficient development aid or to act honestly to prevent adverse climate change – the Solomon Islanders’ greatest and subject of continuing requests over the entire decade since the inadvertently shared ‘joke’. Morrison’s ‘climate commitments‘ at COP26 are still being flagrantly compromised by accelerated mining that will increase global warming, not diminish it. The Islanders understood the hollowness of Morrison’s COP26 promises.

Now, in April 2022, the Solomon Islands having already lost a significant part of their archipelago to the rising seas, their government accepted generous development aid from a diplomatically expanding China to build much needed sea defences. Unremarkably, the Chinese realise that the Islanders’ desperate need for aid can leverage other concessions, and seal a long-term mutual relationship – something that Morrison now claims that he offers as well. This breakdown in our multi-generation partnership with South Pacific islanders, which endured virtually since World War II, has now, naturally, perturbed the USA. It has led to the realisation that Morrison’s inhumanity towards the Solomon Islanders is a momentous international failure, negating years of building ‘the Pacific family’, with consequences for Australian defence– one which all Pacific Island nations will clearly note. With Prime Minister Morrison subsequently virtually ordering his Solomon Islands counterpart to cancel their agreement with China – that “[Australia] will not have Chinese military naval bases in our region, on our doorstep”, that “we have the same ‘red line’ as the United States on these matters” – tensions with our Pacific family are likely to inflame further.

But is that all that the policy failure implies, that inhumanity towards others can result in them finding better friends? Well, there are many Australians who might reflect about these events, and think quite differently from the Coalition’s claim that it will all be fixed if China can be sent packing, and the Solomon Islands return to the ‘benefits Australia offers’.

A momentous defence and security policy failure is occurring within Australia too, brought about by the almost total dismissal of climate change by successive Coalition governments. It is not as if they had not been warned by their own defence advisors and by fire survivors and emergency service chiefs.

The Morrison Coalition has totally failed in the defence of ordinary Australians, whether during the climate-change-induced holocaust of the 2019-20 bushfires, or during the ‘biblical floods’ of 2022 with their increased frequency and remarkable water-heights never experienced before. Were Australians treated to the same joke as the Pacific Islanders? The government seemed to laugh at Australians living in non-Coalition held electorates near Lismore as the floods destroyed their businesses and homes, with delayed offers of support and uneven provision of Services Australia staff elsewhere – until Mr Morrison could personally deliver it some weeks after furious complaint from within the NSW Liberal party. Flood victims trapped on rooftops were left to save themselves, with neighbours in kayaks and tinnies coming to their rescue, much like Solomon Islanders must have to do between sinking islands.

This failure to act to stem climate change is now resulting in a gathering welter of consequences which the Coalition somehow ‘cannot seem to see’. Why do they have no foresight despite 50 years of scientific warnings of the consequences of excess carbon emissions and its resulting global warming effects? One can only conclude that this failure to see is because the Morrison government is controlled by ‘lobbyist’ party members – these are people who answer to and represent industry groups controlled by billionaire oligarchs from Australia and overseas, people who covertly control Coalition policy on climate, on fossil fuels, a and on much else.

What can we expect from a Coalition government in the future? Not much, except escalating climate disasters. It is not good enough to mouth sound-bite claims that it is all the fault of China. Amazing – a Coalition government that talks about the Canberra ‘bubble’ – a bubble which just got burst by one tiny Pacific nation. There are many other Pacific nations facing the same challenges as the Solomon Islands. How well have we treated them? Peter Dutton, whose ‘joke’ was caught on mike, is now our Defence Minister who believes that Pacific family ties will be strengthened by accusing the Solomons PM of taking China’s bribes. Could this become a defence failure deluge?

Coalition inaction in mitigating (or even acknowledging) climate change appears designed to help the oligarchs to become richer extracting the last dollars from fossil fuels, aided by a government that charges virtually zero resource rents and low tax over decades. Australians working in coal mining towns know about global warming and of the coming demise of coal, and must wonder when and if the Coalition will ever fund the development of alternative industries in their towns and regions – not likely if they collect no revenue from the mining giants.

I don’t think they ever will as long as the oligarchs don’t want them to. I think it’s time in Australia for a regime change.