Since 2005, the annual Lowy Institute Poll has been tracking the attitudes of Australians to foreign policy issues and their place in the world. The issue of boat people, unauthorised asylum seekers, irregular maritime arrivals, refugees – the politics is so contested that it is difficult to find a neutral term – has been a lightning rod in Australian politics since 2001.

The issue of boat people, unauthorised asylum seekers, irregular maritime arrivals, refugees – the politics is so contested that it is difficult to find a neutral term.

That was when then prime minister John Howard refused landing permission to a boat of more than 430 asylum seekers who had been rescued by Tampa, a Norwegian freighter, off the coast of Christmas Island. Howard won the next election comfortably.

Now, following Labor’s win in parliament last week permitting mainland medical treatment of serious cases among existing asylum seekers in offshore detention – presented by its supporters as a minor, humanitarian change – Prime Minister Scott Morrison appears to be using the charged atmospherics of border security for his own “Tampa moment” in the upcoming election, expected in May.

But what does the Australian public think?

When Lowy Institute polling has focused on the issue of asylum seekers and boat arrivals, the number of respondents who expressed the highest level of concern (“very concerned”) about “unauthorised asylum seekers coming to Australia by boat” remained surprisingly steady, even between 2010 and 2013 where there was a very significant increase in boat arrivals.

There is significant concern among Australians about the issue. But at least as far back as 2005 (which was the year the Lowy Institute commenced polling attitudes on foreign policy issues) it has not been seen as a critical threat by the majority of the adult population when they have been asked to give their opinions on a range of threats to Australia.

In 2018, “large numbers of immigrants and refugees coming into Australia” was seen as a critical threat by 40% of Australians, essentially unchanged from the last time the question was asked in 2009 when it was 39%. 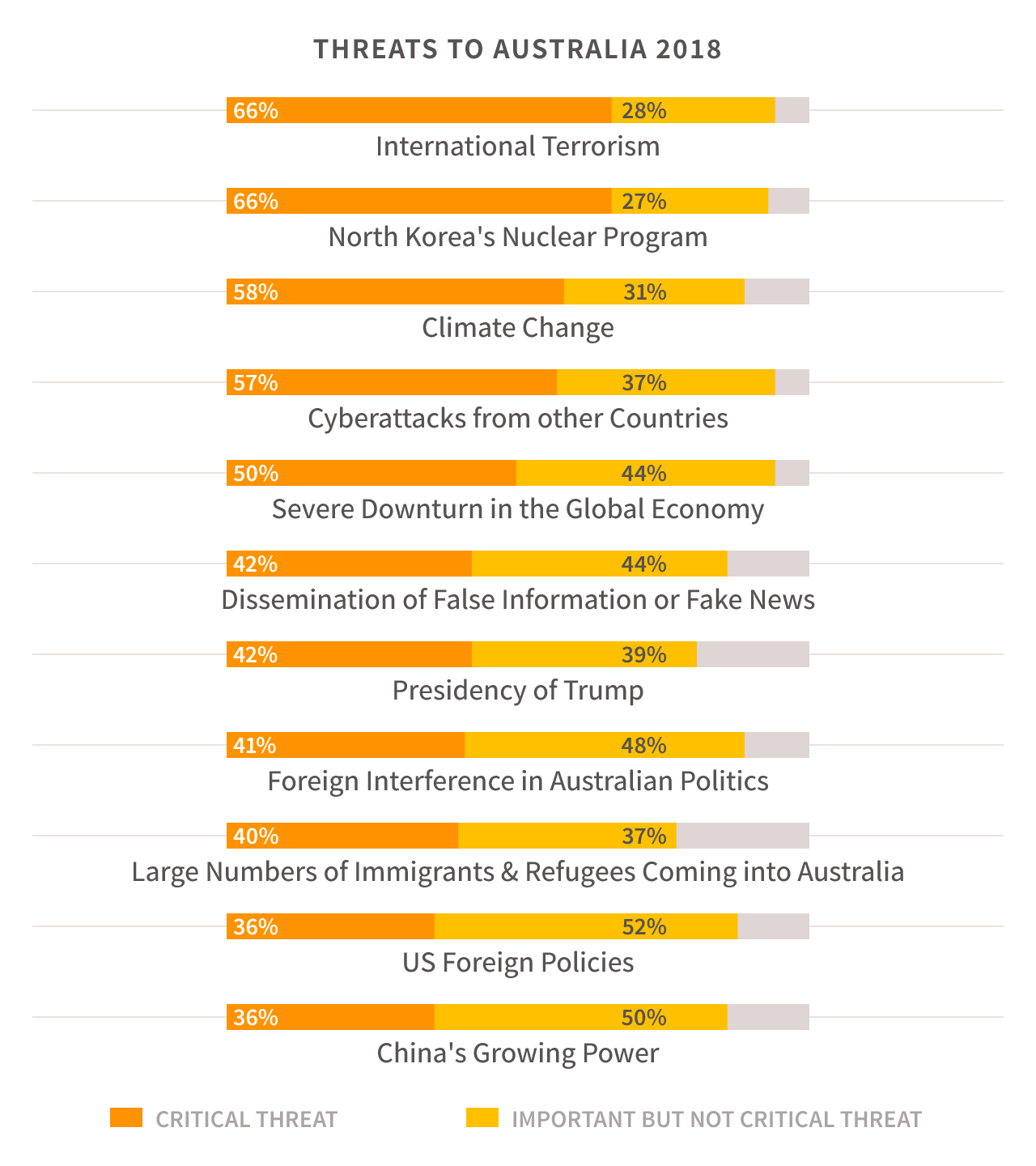 More tellingly, the issue is a low-order concern compared with most other potential threats on which the Lowy Institute has polled, including international terrorism, North Korea’s nuclear program, climate change, cyber-attacks, disruption in energy supply, food shortages and scarcity of water.

Among eleven possible threats, it ranked third last in 2018; fourth last of fourteen in 2009; third last of twelve in 2008; and third last of thirteen in 2006. Last year, 66% of Australians saw “international terrorism” as a critical threat; by comparison, 40% said the same about “large numbers of immigrants and refugees coming into Australia”. A considerably larger proportion of the population (50%) thought a “severe downturn in the global economy” was a critical threat in 2018; 42% thought the same of “the presidency of Donald Trump”. In 2009, “Islamic fundamentalism” was rated a critical threat by 50% of respondents. 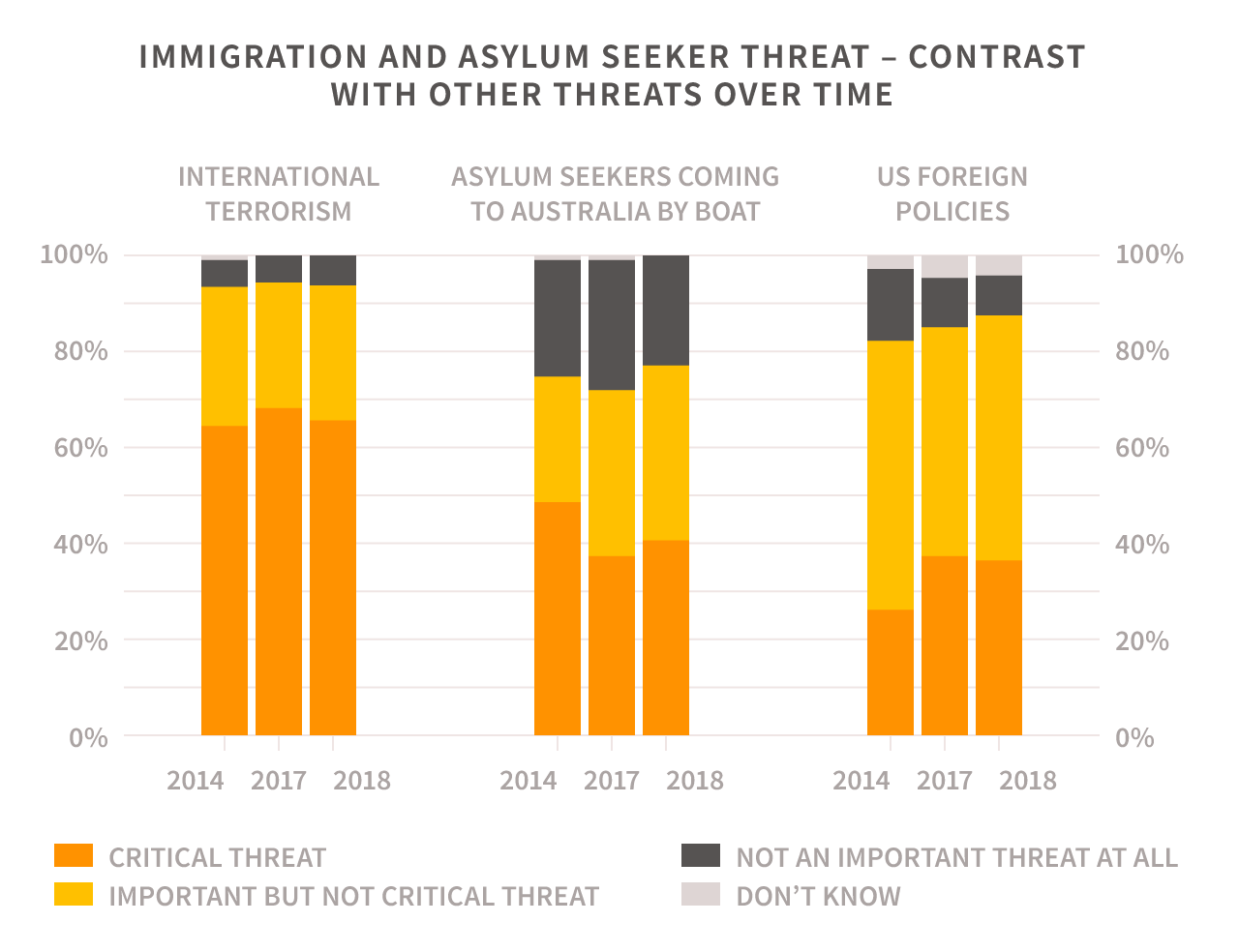 Support for the harder-line proposition – that no asylum seeker coming to Australia by boat should ever be allowed to settle in Australia – has been a minority position, which weakened a little between 2014 (42% agree) and 2016 (38%) before firming again in 2017 (48%). 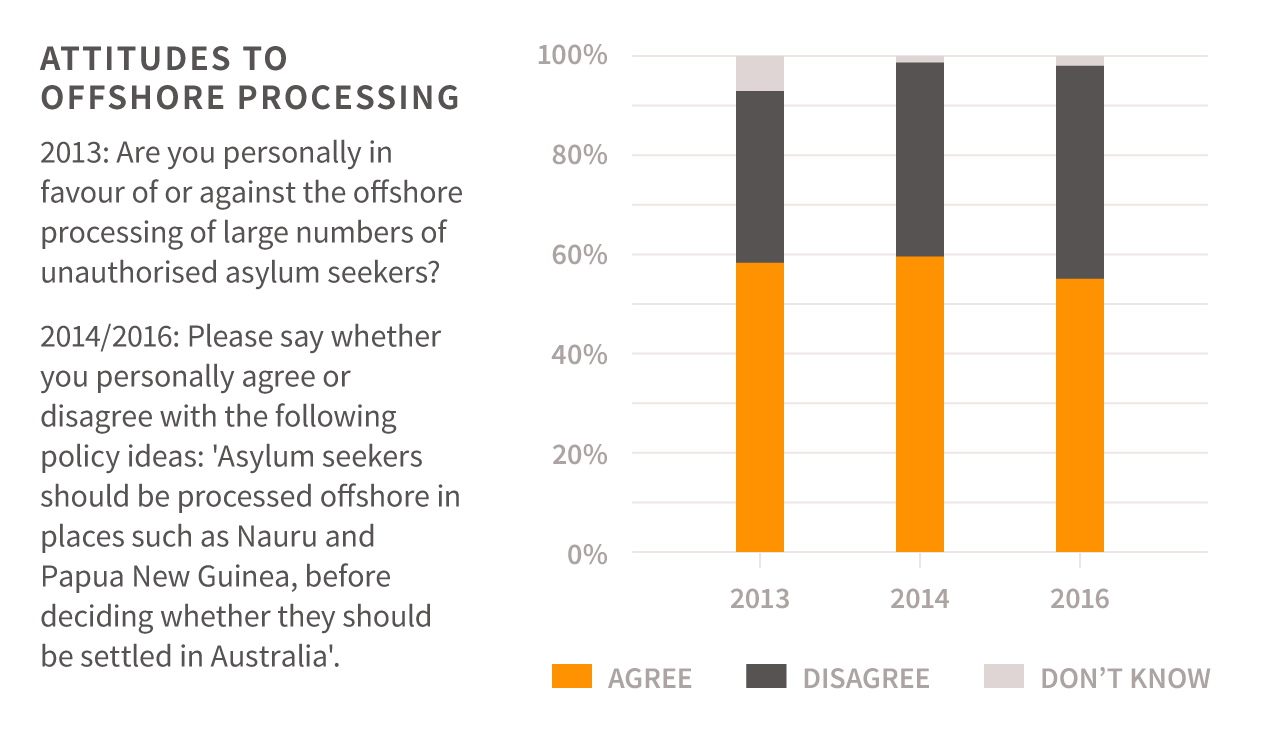 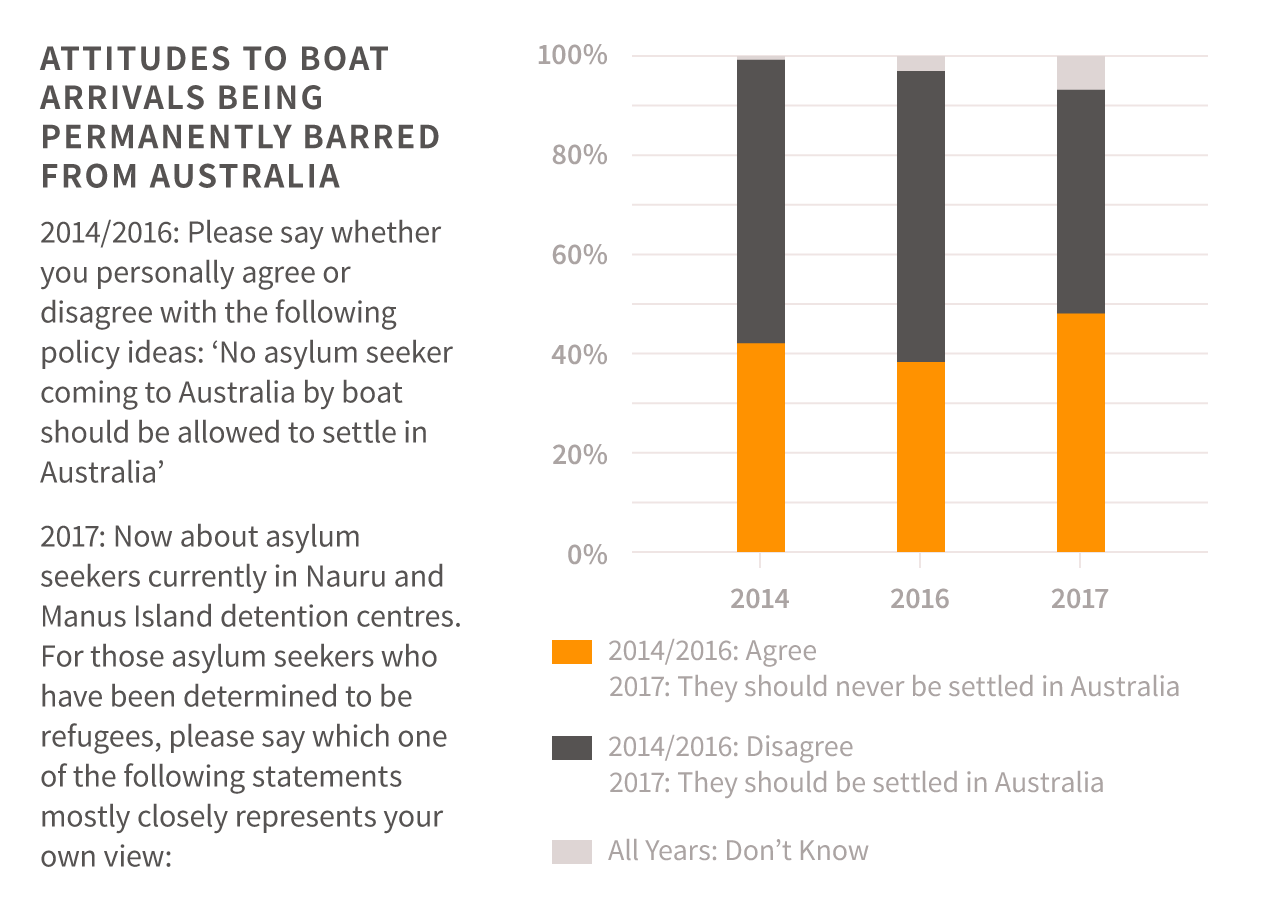 Incidentally, in 2013, at the peak of the boat arrivals, the Lowy Institute Poll asked people if they thought too much attention was paid to the issue by media, politicians, and the public. Most thought it was. 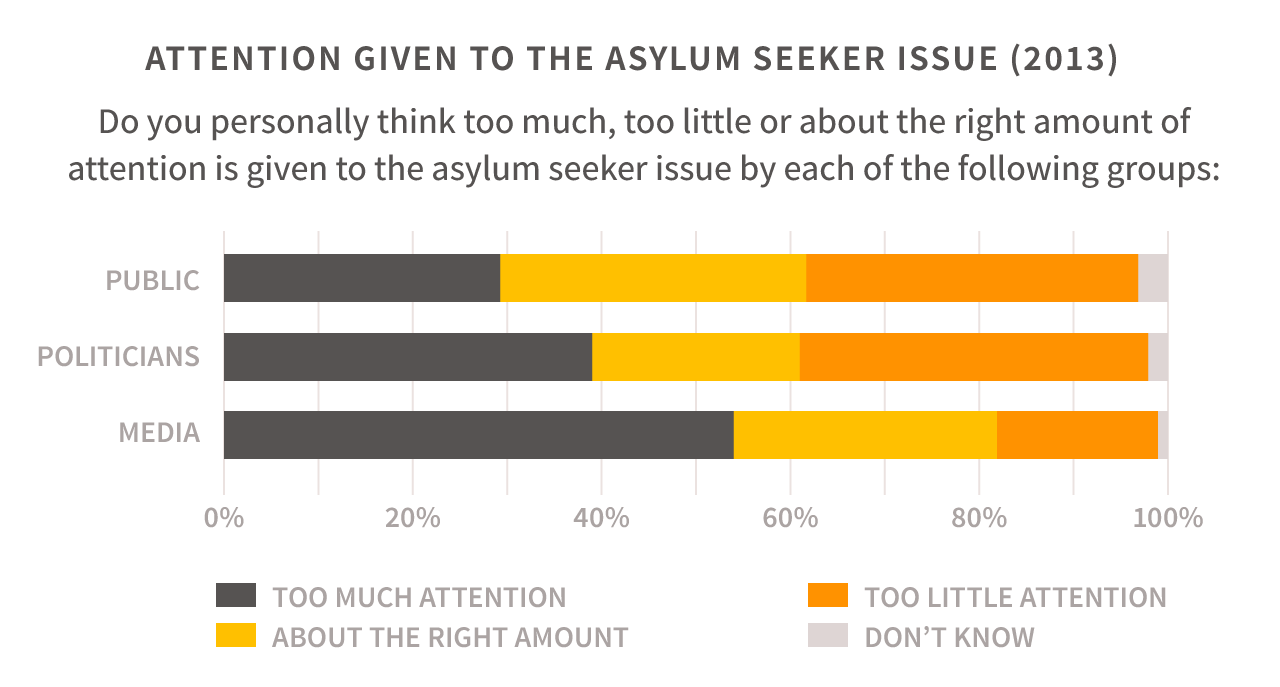 This entry was posted in Refugees, Immigration. Bookmark the permalink.