KEN HENRY. A longer term look at the labour market.

The unemployment rate is relatively low and the participation rate relatively high. So the employment ratio is close to historically high levels. But that doesn’t tell us everything we need to know about the strength of the labour market.

Total hours worked divided by the population of working age is the same today as it was 40 years ago. And the cyclical behaviour of this broadest measure of labour utilisation shows that the Australian labour market has not been performing strongly for several years.

Michael Keating’s post, ‘How good is the labour market?’ (P&I, 27 February), draws attention to the increasing prevalence of part-time jobs. When I was still in the Treasury, I didn’t think this was such a bad development. For instance, in the middle of the global financial crisis I was impressed by the way in which an apparently flexible labour market seemed to act as a shock absorber; many employees worked fewer hours rather than becoming unemployed, which would have had more serious consequences for their ability to service a mortgage. I’m no longer so comfortable with the increasing ‘casualisation’ of the labour market .

Over the past 40 years Australian house prices have approximately quadrupled in real terms (i.e., after allowing for inflation). Over the same period of time, the proportion of working age females (15 years or more) with a job has increased by 45 per cent. For decades we have been hearing that families can’t afford to buy a house unless both adults are working.

Yet, despite strong increases in female employment, things seem to be getting harder for Australian families.  Over the past 30 years, the average Australian house price has increased from about 2½ times household disposable income to about 5 times and the ratio of debt to disposable income has almost tripled, from less than 70 per cent to about 190 per cent.

Relatively slow wages growth in recent years must explain some of the financial stress Australian households are experiencing.   But there are three other labour market developments at work. The first concerns the impact of recessions and other periods of relatively weak economic growth. The second concerns the impact of workforce aging. And the third is a long-term trend decline in average hours of work per employee.

The long-term impact of recessions on female employment rates is also strong, but has been more than offset by a very strong trend increase in females entering the labour force.

Over the past 40 years, the female employment ratio has increased by 45 per cent. But the employment ratio of males has fallen by 10 per cent. Females have become a larger share of the total workforce. Michael Keating’s note presents occupational data showing that females have not simply been replacing males in the workforce. That is confirmed by the fact that average hours worked per employee have been falling for both males and females.

So what if we put all of this information together and calculate average hours worked per person of working age? This, the broadest measure of labour utilisation, is the ‘participation’ component of the 3Ps that I developed, following publication of the first Intergenerational Report in 2002, to explain the impact of population aging on GDP and GDP per capita (multiplying this ‘participation’ component by the ‘population’ of working age, and then by labour ‘productivity’ produces GDP).

Figure One shows the behaviour of the employment ratio (blue line), average hours worked per employee (green line), and their product, hours worked per person of working age (red line). All series start with an index value of 100 in September 1978.

Average hours worked per employee shows the least cyclical variation, but has clearly been in trend decline, most obviously in the 21st century. On the other hand, the employment ratio, while obviously affected by cyclical weakness in the recessions of the early 1980s and early 1990s, exhibited trend growth up until the onset of the global financial crisis.   The impact of the GFC is clear, being very much muted relative to those earlier periods of cyclical weakness. As was anticipated at the time, when Australia emerged from the GFC (that is, by the time the unemployment rate had fallen back to around its pre-GFC levels), the employment ratio was in trend decline, due to the impact of population aging on workforce participation. But in the past five years, the employment ratio has grown again, and is now close to the pre-GFC peak. This is a consequence of a relatively low unemployment rate and an unexpectedly high rate of workforce participation. Understandably, both of these things have been celebrated. 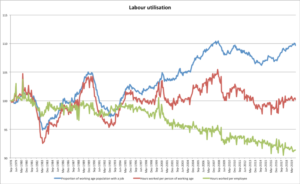 The red line shows average hours worked per person of working age. It is not a pretty picture. Over the past five years, the decline in average hours worked per employee has offset most of the improvement in the employment ratio. A higher proportion of the working age population has a job, but on average employees are working fewer hours, so hours worked per person of working age has increased only slightly. Comparing the past five years with earlier periods of economic growth (the emergence from recession in the 1980s and 1990s and the five years to end 2007), today’s labour market looks anaemic.

The long-term picture is also quite remarkable. The red line finishes up at pretty much exactly where it started, 40 years ago. Over the past four decades, average hours worked per person of working age has exhibited a lot of volatility, but no clear trend.

We have had decades of increasing rates of female workforce participation. Many say that this is due, at least in part, to the need for families to have two or more workers to pay the mortgage. That seems reasonable. Yet, if we look at the total hours worked in Australia today (male and female) and divide by the total number of people of working age (male and female), we find that we are pretty much where we were 40 years ago.

The average person of working age has a much bigger mortgage, and is paying a lot more in childcare fees, but is working no more hours. Given historically low wages growth, that can’t be by choice. And, indeed, the highly elevated rate of underemployment tells us that its not.

Of course, the data shown in Figure One are averages only. They tell us nothing about the distribution of part-time jobs, which is fundamental to developing a proper understanding of the contribution of the labour market to the wellbeing of Australian households.

Even so, the averages are telling. How good is the labour market? Not good enough. 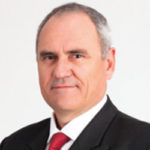