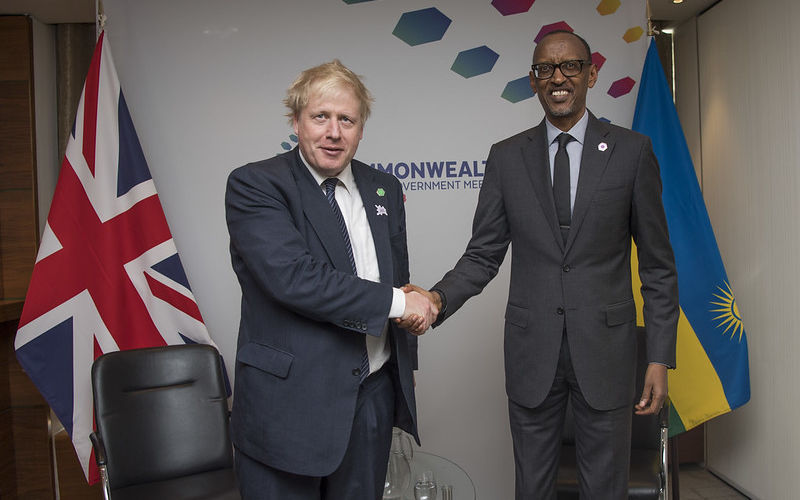 Anyone entering the U.K. illegally... may now be relocated to Rwanda," Johnson said in a speech. Image: Flickr

British Prime Minister Boris Johnson’s move to deport asylum-seekers to another country thousands of miles away will “only lead to more human suffering, chaos, and at huge expense to the U.K.,” said one refugee advocate

The United Kingdom’s Thursday announcement that some asylum-seekers will be given one-way plane tickets to Rwanda was swiftly and forcefully denounced by human rights groups, with one expert calling right-wing Prime Minister Boris Johnson’s ploy to offshore migrants “unethical, immoral, ineffective, costly, and very likely unlawful.”

“Anyone entering the U.K. illegally… may now be relocated to Rwanda,” Johnson said in a speech. He asserted that the policy is intended to stop “vile people-smugglers [who] are abusing the vulnerable and turning the [English] Channel into a watery graveyard.”

Enver Solomon, chief executive of the Refugee Council, said in a statement that the conservative Tory Party’s “cruel and nasty” plan to deport asylum-seekers to another country thousands of miles away “will do little to deter desperate people from seeking protection or stop the smugglers but only lead to more human suffering, chaos, and at huge expense to the U.K.”

“Treating people like human cargo by using the force of military to repel vulnerable people who have already endured extreme human suffering, and expelling them to centers in Rwanda, a country with a questionable record on human rights, is dangerous, cruel, and inhumane,” said Solomon.

According to the Associated Press:

Home Secretary Priti Patel visited the Rwandan capital, Kigali, on Thursday to sign what the two countries called an “economic development partnership.” The plan will see some people who arrive in Britain as stowaways on trucks or in small boats across the

English Channel picked up by the U.K. government and flown 4,000 miles (6,400 kilometers) to Rwanda, apparently for good.

Migrants have long used northern France as a launching point to reach Britain, either by hiding on trucks or ferries, or—increasingly since the coronavirus pandemic shut down other routes in 2020—in dinghies and other small boats organized by smugglers. More than 28,000 people entered the U.K. on small boats last year, up from 8,500 in 2020. Dozens have died, including 27 people in November when a single boat capsized.

The news outlet reported that “the Rwandan government said Britain had paid 120 million pounds ($158 million) up front to pay for housing and integrating the migrants. It said they would be given ‘a range of opportunities for building a better life in a country which has been consistently ranked as one of the world’s safest.'”

Rwandan opposition figure Victoire Ingabire Umuhoza questioned her government’s deal with the U.K. She noted that the East African country—where more than 800,000 people were killed in a genocide less than 30 years ago and whose current government has been criticized, including by the U.K. Home Office last year, for being repressive—is also a source of refugees.

“Rwanda has consistently ranked [as] one of the world’s safest nations but at the same time consistently a country where its inhabitants are unhappy,” Ingabire Umuhoza said in a statement.

“Sending people to another country—let alone one with such a dismal human rights record—for asylum ‘processing’ is the very height of irresponsibility and shows how far removed from humanity and reality the government now is on asylum issues,” said Valdez-Symonds.

According to AP, “Britain says relocation decisions will not be based on migrants’ country of origin but on whether they used ‘illegal or dangerous routes’ to reach the U.K. from a safe country such as France. Not all such arrivals will be considered suitable to be sent to Rwanda; it was unclear what the criteria for making the decisions would be.”

Claiming that Rwanda will have the “capacity to resettle tens of thousands of people in the years ahead,” Johnson said that an “unlimited” number of asylum-seekers, including thousands who have arrived since the start of 2022, will be subject to relocation. Patel, for her part, said that the “vast majority” of migrants arriving in the U.K “illegally” would be considered for expulsion.

BBC News, however, saw the Rwandan accommodations set up to house asylum-seekers and estimated that they provide “enough space for about 100 people at a time and to process up to 500 a year.” A pilot program is expected to focus on single men, though the prime minister acknowledged that the scheme, precise details of which have yet to be confirmed, would not take effect immediately due to legal challenges.

Yasmine Ahmed, U.K. director at Human Rights Watch (HRW), pointed out on social media that Patel unveiled the government’s plan to banish asylum-seekers to Rwanda “at a time when the British public have opened their hearts and homes to Ukrainian refugees.”

“Every day the U.K. is witnessing the brutality of war that desperate Ukrainian families are fleeing,” said Solomon of the Refugee Council. “This is the reality faced by refugees escaping conflicts all over the world.”

“Every day the U.K. is witnessing the brutality of war that desperate Ukrainian families are fleeing. This is the reality faced by refugees escaping conflicts all over the world.”

“There is a deliberate attempt to paint people seeking asylum as jumping the queue,” Solomon continued. “Yet, this ignores the fact that the government’s own data shows that two-thirds of men, women, and children arriving in small boats across the Channel come from countries where war and persecution have forced them from their homes. With so few safe and legal routes available, these people are left with no other option than to risk their lives in small boats at the hands of smugglers in desperation to find safety.”

“This government’s proposal to treat refugees differently purely on the basis of how they arrived in the U.K. undermines a key principle of refugee protection,” he added. “People desperately fleeing war and persecution should always have a fair hearing on British soil.”

Patel contended that the Johnson administration’s “world-first migration partnership with Rwanda will deter dangerous and illegal journeys to the U.K., give migrants the chance of a new life, [and] set a new standard on asylum and resettlement,” but other governments have deported asylum-seekers to third countries before.

In 2013, Australia began sending asylum-seekers attempting to reach the country by boat to Papua New Guinea and the tiny atoll of Nauru, vowing that none would be allowed to settle in Australia. The policy all but ended the people-smuggling route from Southeast Asia, but was widely criticized as a cruel abrogation of Australia’s international obligations.

Israel sent several thousand people to Rwanda and Uganda under a contentious and secretive “voluntary” scheme between 2014 and 2017. Few are believed to have remained there, with many trying to reach Europe.

Calling Johnson’s decision “abhorrent,” Emilie McDonnell, U.K. advocacy and communications coordinator at HRW, tweeted that “the government is shirking its legal and moral duties, and learning nothing from Australia’s cruel and illegal offshore detention regime.”

Kartik Raj, Europe researcher at HRW, added that “even by the standards of the U.K. government’s cruel and callous treatment of people seeking asylum and general hostility to migration, and what we have come to expect, the reported offshoring deal plumbs new depths.”

Britain’s Conservative government has floated other proposals including building a wave machine in the Channel to drive boats back. Johnson said the Royal Navy would take charge of responding to small-boat crossings, but that the idea of pushing vessels back towards France had been rejected as too dangerous.

Several earlier proposed locations for the U.K. to send migrants to—including the remote Ascension Island, Albania, and Gibraltar—were rejected, at times angrily, by the nations themselves.

“The Rwanda plan faces hurdles both in Britain’s Parliament and in the courts,” the news outlet noted. “Johnson’s Conservative government has introduced a tough new immigration bill that would make it more difficult for people who enter the country by unauthorized routes to claim asylum and would allow asylum-seekers to be screened abroad. It has not yet been approved by Parliament, with the House of Lords seeking to dilute some of its most draconian provisions.”

“People desperately fleeing war and persecution should always have a fair hearing on British soil.”

Opposition lawmakers accused Johnson and other Tories of attempting to divert attention from the so-called “partygate scandal.” Johnson, who was recently fined by police for holding parties in government buildings in violation of Covid-19 pandemic lockdown regulations, became the first British prime minister found guilty of lawbreaking while in office, and he is currently resisting calls, including from some members of his own party, to resign.

Solomon, meanwhile, said that “if the U.K. government is serious about reducing the need for onward movement of refugees, it must act as a truly global Britain and invest humanitarian and development aid into the countries people are fleeing. ”

“We must work multilaterally,” he said, “to get an effective bilateral agreement with France and our E.U. neighbors for fair, effective, and coordinated asylum processing, creating safe routes via humanitarian visas from assessment centers set up at British embassies elsewhere in Europe to enable people in need to travel without resorting to smuggling networks.”

Our work is licensed under Creative Commons (CC BY-NC-ND 3.0). Feel free to republish and share widely.
Kenny Stancil is a staff reporter for Common Dreams. This article was published on April 14, 2022