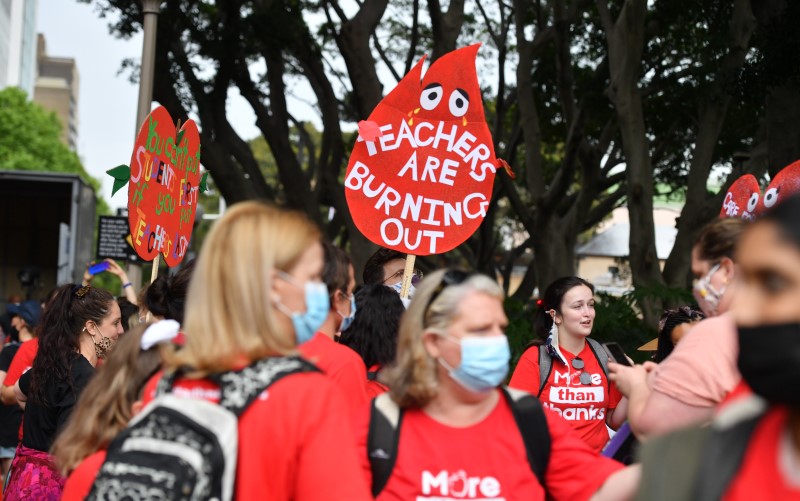 It's time to restore the social contract around teaching. (Image: AAP/Mick Tsikas)

A decline in teachers’ pay relative to other comparable professions over three decades and a growth in the intensity and insecurity of their work were factors leading to this months’ strike by the NSW Teachers Federation, according to Professor John Buchanan. This article refers also to the recent comprehensive review by a team headed by former WA premier Geoff Gallop which culminated in the report “Valuing the Teaching Profession“.

The strike took place with NSW facing a significant teacher shortage. The causes listed above are compounded by increasing student enrolments, an ageing workforce and a decline in university enrolments in teacher education.

Like all state governments in Australia, the NSW government is obliged to ensure that there is a school place for every child. So it is no wonder that the NSW education minister and her department are anxious to deny that there is a crisis or that they have allowed a teacher shortage to develop in this essential service.

In its attempt to reassure the public that it has any problems well in hand, the NSW education department did provide a useful guide to what a teacher shortage really means in practice.

Insisting that the shortage was not a crisis, it announced a supply strategy that involves advertising campaigns, faster qualifications and poaching teachers from elsewhere.

As one who has been through periods of teacher shortage in the past, let me decode this pronouncement.

What it means is emergency recruitment and training of new teachers will not give due regard to the fact that teaching is a highly intellectually demanding profession. It means importing teachers from overseas, with little or no regard to the difficulties that can arise in classrooms for both teachers and students where the former may be unfamiliar with our school system as well as the local and broader culture, not to mention the linguistic and cultural diversity of the student populations in many schools.

It means that the students in some schools are denied access altogether to certain subjects in the curriculum; or are taught by teachers working outside their own area of qualifications and expertise; or in overly large classes. Or that they struggle with all these conditions.

The hostility with which Education Minister Sarah Mitchell attacked the striking teachers was surprising. No acknowledgement was made of the gratitude and respect due to them for their work on the front line of the fight to contain the damage of the Covid pandemic and to make major adaptations to their work to support their students.

From my perspective as an outside observer, the federation played a leadership role throughout these past two years — not least in serving the interests of students and teachers as well as the wider community through providing informed advice to government.

It was difficult then not to be shocked at the attack the same minister launched on this union, which she accused of being “a protection racket that fights transparency, and is hell-bent on hanging students out to dry for political purposes”.

It appeared to be the federation’s claim that wages and conditions are the biggest obstacle to attracting and retaining teachers which brought on this hostile response from the minister.

Paying teachers what they deserve is a source of ongoing tension between the profession and governments which erupts in times of crisis.

Serving on an august national education and employment board some decades ago, I ventured into this very issue. In a throwaway line in my speech to an education conference I asked this question: “Why does my cat’s vet earn more than my child’s teacher?” I happened to have veterinarians on my mind at the time because I was dealing with two of the family cats who required the services of our local vet: a dear old mother cat needed hormone treatment for the feline equivalent of menopause while a younger male cat was afflicted by adolescent acne.

I was taken aback when my rhetorical question appeared as a large headline in one of the tabloids. A senior colleague clearly felt that this had lowered the tone of the board and took me to task at the next meeting. The reason why my cat’s vet earned more than my child’s teacher, he explained to me was simply that “we need a lot more teachers than cats’ vets”.

My initial reaction to this statement was that it was flippant and facile. But I later came to see that it was quite profound.

Teaching is a mass profession and a public one. In this country, even the teaching costs of the large private sector have now in effect been shifted to the public purse through the mechanism of recurrent grants from government. Relevant employment statistics show that, for around every 14 school students, we employ the equivalent of a full-time teacher. For the whole population, we employ the equivalent of a full-time nurse for around every 84 patients. While for a cat population of some 3.7 million, it would appear that only one vet is employed for every 308 cats.

The daunting size of the teacher salary bill in the government budget means, in reality, that this is never really likely to be among the highest paid professions.

It never has been. But, in the past, there was a social contract around professions such as teaching and nursing. In the case of teaching, there was an understanding that job security and a range of other conditions provided some compensation for moderate financial rewards. But this contract has been progressively dismantled by governments with more interest in markets and privatisations than in social cohesion and reciprocity. Many of those entering the teaching profession these days are part of the precariat, denied the full-time, permanent positions they need if they are to afford roofs over their heads or start families in the areas where their services are needed.

As well as restoring the social contract around teaching, there is a need for a broader and more varied range of career pathways that cater for the complexities of teachers’ work at different stages of their careers and that are linked to wage structures alongside the existing structure for rewarding promotions as well as the expertise and experience gained through length of service. The Gallop report should be a blueprint for a new NSW administration.

The setting of curriculum standards and teaching standards have been major achievements by government over recent years. But they are only meaningful where they are accompanied by resource standards that recognise the complexities of teachers’ work. In the NSW public school system, to quote John Buchanan, “there is not enough labour for the tasks set”.

Our children deserve better than this and so do their teachers. In allowing this crisis to develop, both Commonwealth and NSW governments have displayed an indifference to the public school system and to our young people. For some of these, teachers will be their best hope of a decent and rewarding life.