The Kosciuszko area is inundated with myths, views and alternative facts about land management sponsored for political advantage and by vested interests and never for the benefit of the iconic Kosciuszko National Park.

A new 2020 book titled “Kosciuszko: A Great National Park”*1 has been published as an essential resource for researching the real facts. It separates the fiction and provides evidence-based information needed for responsible national interest policy decisions by governments.

On the 18th of May 2020, a new book on Kosciuszko was launched and has received unsolicited positive acclaim. In a highly complementary Canberra Times review, it was enthusiastically

1 described as a “one in a hundred years” book. Titled “Kosciuszko: A Great National Park”*,

the book was five years in the making having been systematically researched, presented and peer-reviewed. It was authored by Deirdre Slattery and I, and I have prepared the following note, not for self-promotion, but to highlight the book’s critical role in providing a baseline of reliable evidence-based information about Kosciuszko National Park.

The book describes the rich history of Kosciuszko, from the story of Aboriginals and their ancient traditional lands and practices, to early exploration, settlement and exploitation and use prior to the mountains being reserved as a great national park. It then describes 75 years of successful park management recognising that the mountains belong to all Australians as a natural heritage icon and that they are of national economic significance as a water catchment.

The book reveals many “alternative facts” commonly championed. In seeking sentimental support from the community (for example), pro-mountain graziers claimed that they “looked after the mountains”, that for historical use reasons they had “special rights” to the high country and that they were “kicked off” their lands. The facts are very different. Pre- 1944, the mountains were crown land and while some graziers had short term special leases and permissive occupancies for grazing subject to renewal, they never owned the land. In 1944 and 1958, the NSW Government determined they would not renew the high altitude leases in favour of water catchment protection and soil erosion control work.

From the view of “looking after the mountains”, graziers, may well have believed they value- added to the mountains. Prior to 1944, from their grazing and economic use perspective, “looking after” involved seasonal burning off that provided “green pick” in otherwise rank stock-unpalatable snow grass. This made it possible for stock to use this otherwise poor feed. But the practice was destructive to the catchment, though there was denial that it caused erosion. The view of the Snow Lease Association, an organisation of mountain graziers, was that the erosion in the catchment was caused by environmental factors including “bushfires, snowdrifts, and strong winds”.

Alpine ecologists concluded differently. Their scientific evidence measured preferential grazing pressure on the stock favoured herbs in the inter-tussock spaces; fire caused soil disturbance and the exposure of soil to frost-heave. They clearly demonstrated that grazing and burning was the cause of soil erosion. The difference between “strong views” about problematic environmental causes for soil erosion and the “scientific evidence” was stark.

This difference reinforced a cultural tension between advocates of “grazing use” and those advising a change to “protection from burning and grazing” for the catchments. It was more than a cultural and historical issue. It was also about private wealth benefit from crown lands through mountain stock grazing versus the national economic benefit of a healthy undisturbed water catchment producing significant water yield. With frequent droughts, overstocking home properties was not possible without supplementary grazing in the mountains.

The alpine ecologists were a threat to this income and traditional way of life. They were vilified as “shiny pants professors” with “leftist views”. Unfortunately for the graziers, this personal attack backfired, for these were eminent Australian scientists, fellows of the conservative Australian Academy of Science and distinguished both nationally and internationally in their field of alpine ecology. It was these scientists that the NSW Government turned to, not the graziers, when they sought an evidenced-based appraisal of the soil erosion condition of the mountain catchments.

The book presents this CSIRO research and other findings. It was found that fire was used too often and fire frequency increased by at least by 6-8 times the pre-European rate causing extensive shrubbing up of the subalpine woodlands. The burning off targeted the removal of snowgums (which lowered water yield) and the active draining of wetlands changed the mountain ecology and catchment water flow regimes. These actions caused landscape scale ecological change to the mountains. Then, there was the problem of uncontrolled over-use. During severe droughts the effectively unregulated mountains became a free-for-all for over-stocked graziers seeking drought relief grazing for their animals. Thousands and thousands of stock were sent to Kosciuszko with no real attempt at setting limits. It was too much for the high country catchments and a tipping point was reached for the alpine area with landscape scale soil erosion the result.

But what were the catchments like before settlement and use? How had Kosciuszko been changed? By using early explorer and settler reports it has been possible to present some idea of what the landscape was like in the 1830’s. It was very different to today. Before grazing, the Kiandra Plains and upper Murrumbidgee River featured grand natural grasslands that moved in the wind as waves across the landscape. The native grasses were tall enough to clip the stirrups of horse riders. The multiple wetlands across this same landscape were a constant threat to unwary horsemen and heavily laden bullock wagons. To the south of Kosciuszko, the lower Snowy River had grand old-growth native cypress pine woodlands with deep chocolate brown soils. It was described by the early graziers as the “fattening grounds” so rich and favourable were the understory of grasses when stock first arrived. The mighty lower Snowy River flowing through the mountains included deep pools rich in freshwater fish. The sub-alpine Main Range was different also. It was dominated by grand, mature snowgums with a tall herbfield grassland sub story. Subalpine wildflowers provided outstanding displays of nature in spring. Wetlands were ever-present and contributed to the drainage systems of our major rivers.

In 2020, the mountains have changed considerably from this historic landscape. Instead of “looking after the mountains” the real legacy of the grazing era has been an ecologically degraded landscape with impacted water yield values. Ever since NSW Premier McKell intervened to stop the catchment erosion damage in 1944, the NSW Government has been cleaning up the mess. Despite millions of dollars of investment and soil conservation successes by park managers, this work was unfinished in 2020 and will take hundreds of years before it can once again resemble its pre-European magnificence. Shamefully, the 2018 perverse intervention by the NSW Government to sanction 19,000 feral horses in the catchments has vandalised this catchment conservation work.

The book challenges and responds to many other myths such as “grazing prevents blazing”, a supposed (dangerous) solution to catastrophic fire events. It exposes many “alternative facts” and the vilification of individuals as part of the brumby alliance support for feral horses in the park. It is the alternative source of information to this un-Australian propaganda and an essential “baseline” of evidenced based information that can assist with wise decisions for how Kosciuszko is managed for the future. The book has been made available at cost price to ensure its availability for readers. 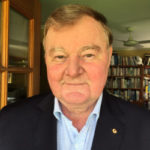 Dr Graeme L. Worboys AM is an Honorary Associate Professor at the Fenner School of Environment and Society, Australian National University