Labor and independents can end a political reign of error 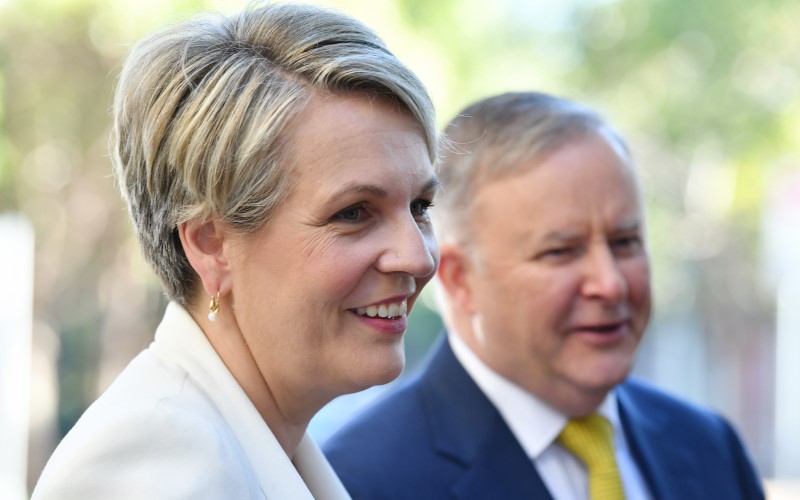 If Tanya Plibersek were campaigning as deputy leader, Labor could get over the line at the election. (Image: AAP/Dean Lewins)

Anthony Albanese’s best chance of election victory is to appeal to the better nature of Australians — and to replace his deputy.

Let me speak selfishly. (It’s all the rage.) If the Morrison/Joyce rabble are re-elected at the coming election, I may well have to leave this country out of sheer despair. I’d be little loss to the public as I can write from anywhere. But I would certainly be missed by my beloved family. And my husband’s skills as a paediatrician in the Northern Territory would most definitely be a loss to Australia.

We are not alone in our anxious restlessness. For many beyond the “global cities”, the 2022 election is one that Labor cannot afford to lose — for our sakes, not theirs only.

It seems indisputable that Labor’s campaigning will succeed or fade on two key issues. Genuine, accelerating climate action is one. The other will be integrity. In fact, integrity — trustworthiness, accountability, honesty — may be the even greater issue. For what use to us is a shabby, reluctant climate policy while it heavily subsidises fossil fuels? While it favours miners, not activists or scientists? Or is dictated by self-interested lobbyists rather than responding to the urgent, measurable needs of this planet, humanity, and all living species?

Over the past eight years, and in the earlier Howard years, the Liberal-National Coalition has shamelessly practised “win-at-all-costs” politics. What this means is they are prepared not only to use public funds to buy votes but also to identify vulnerable groups of human beings and use their humiliation to pitch “security” or “strength” to win votes. They do this by directly cultivating fear and contempt among a poorly informed public, and by scapegoating those they can identify or name as “other”.

Refugees and asylum seekers have perhaps suffered most from these deliberate processes of dehumanising. But these base behaviours also prevent First Nations people from achieving their “Voice” with all that implies. It further impoverishes the poor so that we have unprecedented numbers of Australians, including one in six children, living in poverty in one of the wealthiest nations on the planet.

This is a government that initially could not calculate accurately how many billions were needed for JobKeeper support but was certain there was not enough to provide for staff at public universities, for those in essential creative industries, for increasing the wages of frontline health workers, carers or the childcare workers who lost their support first. Then, when up to $40 billion was squandered on companies that took funds to which they were not entitled, this same government flatly refused to chase up those public funds, despite its earlier eagerness to claw back $1.8 billion it wrongly believed had been overpaid to welfare recipients using Robodebt, a system calculated to terrify the most vulnerable.

A pattern of shafting the poor while enriching the already wealthy is worse than despicable, it is amoral. A pattern of denial, lies and spin from the entire Cabinet, without exception, equally screams moral emptiness. This situation is enabled and amplified by an increasingly weak and co-opted media, with far too few honourable exceptions. Personal and collective greed and entitlement worsen the outlook. Yet we also know that we as a people are capable of much better. And it is with an appeal to the better rather than worst nature of Australians that Anthony Albanese must pitch forward.

To govern with integrity, Labor must live up to Albanese’s explicit commitment to responsibility and decency. Those are important words. Words are meaningless, however, if they don’t translate into observable actions.

Labor must also mend the harm from the massively well-defended race and gender privilege that further damages this nation. Yes, the Parliamentary Labor Party has almost 50 per cent female representation in opposition. But looking to 2022, Albanese needs — desperately needs and not just for the optics — to replace Richard Marles as his deputy. In Marles’ place, Albanese needs a woman whose intelligence and experience transcend partisan and factional divisions. That’s Tanya Plibersek, of course, the longest-serving woman in Parliament who is even known to and liked by those who get their news only from Sky. Whereas Marles? (Don’t ask.) Yes, there are currently two women heading the Labor Senate team. One of them, though, Kristina Keneally, will be in the House of Representatives from 2022, ideally as a reformist home affairs minister. Anyway, it is not leaders in the Senate who most influence a weary, hurting voting public.

The urgent issues other than climate that concern most individuals as well as families are health, housing and education, each direly affected by economic inequity. In all these and especially the last, Plibersek is articulate, informed, truthful, real. If Australia is not to become the Alabama of the South Pacific, then education, training and research — at all levels — will need a massive renaissance. Plibersek campaigning hard as deputy could alone get Labor over the line. With a long-standing commitment already to education, Plibersek is the one to sell it. And much else.

Optics do matter. Women’s inclusion at the highest levels is already running decades late. This will be an election with an unprecedented number of successful professional women running under the Climate 200 umbrella, principally but not exclusively on climate action issues. Those candidates are community independents, often identified as “Voices of…”. They now include Zoe Daniel, a high-profile, highly trusted ex-ABC journalist. Their stated aim is to dislodge sitting Liberal members in so-called moderate seats. They claim (accurately) the Coalition has failed on climate, as well as on integrity. They will complement existing indie stars such as Dr Helen Haines and Zali Steggall. With the fundraising skills of Simon Holmes a Court, and a platform meeting climate concerns, independents may well hold the balance of power in the next federal government.

Where would that leave Labor (assuming Labor does get up and the heartbroken need not get out)? That answer is still in crystal ball territory. But even if the Australian Labor Party (ALP) must form a minority government, with Climate 200 independents in the House of Representatives, and Greens like Mehreen Faruqi and Sarah Hanson-Young in the Senate, this nation could begin to recover. And to heal. The outcome, though, needs to be decisive. This is where our responsibilities come to the fore. Only a substantial loss would see Prime Minister Scott Morrison saying his prayers from the backbench. Or retiring to spend more time at Bunnings.

With the support of alert and appropriately alarmed independents, Albanese and the very smart Chris Bowen could make real progress on climate action, authentically sustainable jobs (more than 600,000 are promised) and the urgently needed rescue of earth, water and oceans as well as air. Labor could work comfortably with all states and territories, and with business, to ensure the manufacturing and technological progress to see Australia selling far less fossil fuels to a warming world and far more renewable energy .

There are other areas, too, where even a minority ALP government could be highly effective. Progress must include the key integrity issue of a federal integrity commission with real powers, plus immediate action on the Uluru Statement from the Heart to ensure belated dignity and a treaty with First Nations peoples. On both these issues, Albanese and shadow attorney-general Mark Dreyfus have made solid, passionate commitments.

Integrity is not a matter for governments only; nor is climate action. Leadership on both those issues sets the tone for the nation. It guides us as to what we can expect from one another, as well as from those who lead us. But it also reminds us that sane government is not down to our politicians only. It reflects our personal as well as collective values. Our grasp of integrity determines who and what we vote for. It’s the youngest among us who will be most affected. Fleeing may seem viable in our bleaker moments. But, in truth, we cannot desert them.