Labor could lose the election — and it just might deserve to 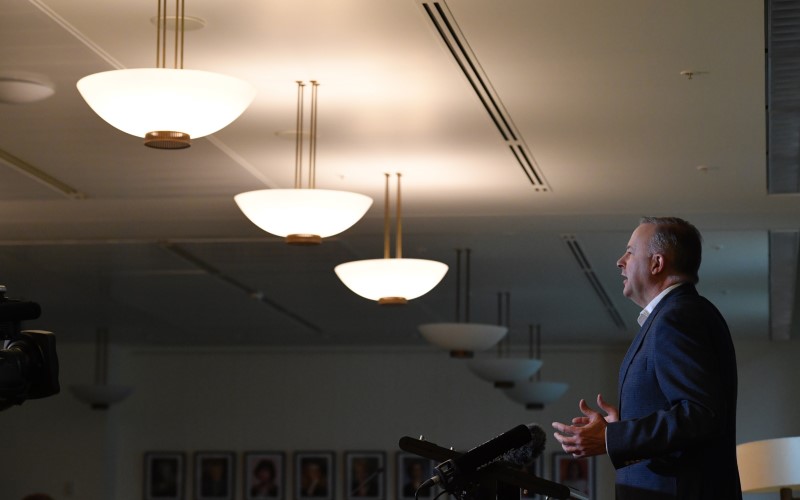 You might think Labor is poised to win the next election, but it’s doing everything it can to snatch defeat from the jaws of victory.

The abiding fear of the weak and the timid in Australian politics is of being wedged, of being misrepresented, or of having the true, but undisclosed, implications of what one has said being drawn to the public’s attention, unravelling one’s position.

Last week’s intervention in the national security debate by Paul Keating, the prime minister of 25 years ago, is an object lesson in why the confident, the self-assured and the bold are never restrained by such anxieties.

Whatever Keating’s failures as a politician, they were not of being mealy-mouthed, of shying away from Labor tradition or principle, or of being afraid to enter into a debate lest anyone, anyone at all, disagree.

That most leaders of the federal Labor party since Keating have distrusted the electorate, have been pessimistic about its capacity to hear and understand its messages, and have shied away from conflict and debate, or couched its policies with weasel words is one of the major reasons it has been unable since to win, or having won, to retain the electorate’s confidence.

One might think that Labor was poised to take office at the next election. Scott Morrison is doing almost everything he can to deserve to lose it.

But Labor, in full panic mode lest anything it says or does gives comfort to Coalition scare campaigns, is also doing everything it can to deserve to lose, or to snatch defeat from the jaws of victory.

Not only do I doubt that it can win an election by default, but I suspect that if it wins an election without a coherent message or broad set of policies, it will govern in a way that forfeits any right to the respect of its members or supporters.

That is, it could be as weak, indecisive and devoid of guiding principle as it has been over the past two years, in effect merely taking its agenda from being ever so vaguely more moderate than the Liberal leader of the time. At such a time it is the Coalition calling the shots, not Labor.

Finding some spine and giving potential Labor voters something to support or mobilise about is not necessarily about suddenly issuing policies presently withheld for what Labor’s campaign geniuses will insist are tactical reasons.

(These same geniuses, party organisers, pollsters and advertising advisers, are, of course, the very same people, despite changes of Labor leadership, who have advised Labor into mostly consecutive defeats since Keating’s time. The one exception — Kevin Rudd in 2007 — won on the strength of his personality, not by following the accumulated wisdom of the party machine and campaign “specialists”.)

It may well be, indeed, that the election will be won not by policies or promises but by philosophies.

Morrison is attempting to fashion a narrative of the coalition being about “freedom” and choice, about its being an enemy of any force of moral, social, economic or legal coercion, with the Labor Party being hopelessly caught up in wanting to make all of the decisions itself, depriving the middle class of choice.

In this narrative, Labor is becoming more and more authoritarian, more and more wedded to collectivist decision making using the full force of the state’s coercive powers to punish anyone who does not agree with it. By this account, apparently, one must understand that it is Labor which is doctrinaire, totalitarian in bent, and the natural enemy of any Australian who wants to tackle problems in his or her own way.

It would be all too typical of modern Labor cowardice on such matters if its strategic or tactical response was developed on one or other of the following three lines.

First, it’s a trap. If we try to respond by defending collectivism in any way, we will be portrayed as communists, with members of the secret police at our elbow. Best to just ignore it.

Or, second: we must prove that we are more freedom-oriented than they are. Perhaps, to throw them off their stride we should propose using Commonwealth powers to override all speeding laws.

Or, third: the very fact that they are settling on this as a campaign idea suggests that they have been told that this, like economic management, law and order, and national security are perceived by voters as among their strengths. It could distract us by taking the focus on the election campaign away from infrastructure. Or housing. Or (cough, cough) education.

With responses such as this, one could imagine Morrison knowing he is on to a good thing and suggesting that Labor is avoiding the real issue of the campaign.

That it is using prevarications, evasions and refusal to address the questions to disguise its intrinsic tendency to want to use the power of government to advance its policies, and its decided and determined view of what will best advance the interests of the Australian people.