Labor’s plan for an anti-corruption body 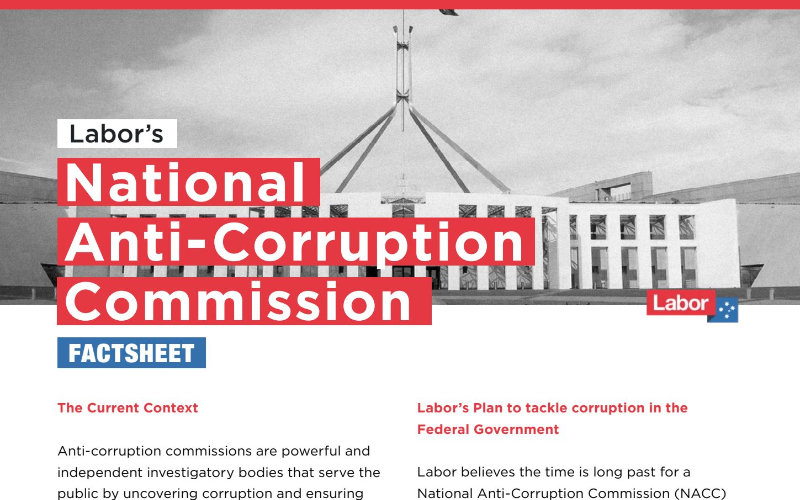 The ALP this week released an outline of the National Anti-Corruption Commission (NACC) it would introduce if it were to come to power at the next federal election, a body based on the Independent Commission Against Corruption (ICAC) that has operated (mostly) successfully in New South Wales for more than three decades.

It is a vastly different animal from that promised almost three years ago by the current federal government – but still not delivered. The government’s proposed Commonwealth Integrity Commission (CIC) is based on an expanded version of the current Australian Commission for Law Enforcement Integrity (ACLEI), a body that has achieved little in its 15 years.

The government has consulted widely about the proposed CIC. The extent to which it has bowed to the many criticisms directed at it will be revealed when the new Attorney-General, Michaelia Cash, unveils the legislation – probably next month.

Meanwhile, it is possible to examine the main features of Labor’s model. In a second article I will look at the conviction last week of former NSW Labor Ministers, Eddie Obeid and Ian Macdonald, of crimes that were only revealed and able to be prosecuted as a result of an investigation by the NSW ICAC, and the way the law is evolving to handle its corruption findings.

The Labor proposal is for a commission that would:

While not specified in the brief outline released by the ALP, it has to be assumed that the Commission would have the same powers to compel the attendance of witnesses, and require them to produce answers, as existing Commissions such as ICAC and the CCC have, and presumably also the power to intercept phone calls and other electronic communications. Such powers are essential for the effective operation of the proposed commission.

The proposed jurisdiction would also cover private individuals and companies involved in government corruption. But it doesn’t extend to the judiciary and members of administrative tribunals. Shouldn’t that omission be rectified?

It would be able to inquire into any allegation of ‘serious and systemic corruption’. This is similar to the jurisdiction of bodies such as ICAC and the Queensland Crime and Corruption Commission.

It goes much further than has been proposed by the Government which would limit its CIC to allegations of corruption involving criminal misconduct for most of those it covers. Like those State bodies, Labor’s NACC would also be able to investigate complaints from virtually any source. The limited powers to complain (the public would be excluded) proposed by the Government would have prevented its CIC from investigating the complaints that prompted ICAC to investigate the Obeids.

Labor is proposing to have the NACC overseen by a parliamentary committee. This doesn’t go far enough. The committee must not be, or be seen to be, a rubber stamp. It is important that such a committee should be chaired by an Opposition MP and that before any appointments to the NACC by the government are confirmed, they should be supported by at least one Opposition or independent member of the committee.

A crucial difference between the two proposals is Labor’s insistence that the NACC should be able to investigate allegations of past, as well as future, corruption. Whether the NACC would concern itself with well-worn scandals such as sports grants and commuter car parks rorts would be for the commission to decide. But to kick off this way would most likely taint its reputation (for lending itself to a political witch-hunt). However, the NACC should be able to look to and examine past behaviour for the source of current and future corruption issues.

Whether the Commission should, at its own discretion, hold public hearings is an extremely divisive issue. Those against it complain about the way reputations can be shredded, even though no finding of corruption or criminal charge might emerge from a public investigation. Those favouring open hearings insist that they have an important educative role, for the public as well as for those who might be tempted to misuse their office by acting corruptly.

That educative function should also be written into the NACC charter. It should have a corruption prevention function, involving both analysis and the promotion of integrity throughout the public sector.

Perhaps the most important issue not addressed in the Labor package is the issue of funding. Time after time fearful (or vindictive) governments in Australia have attempted to strangle their own anti-corruption bodies. It has happened at both the state and federal level – most recently with cuts to the budget of the Auditor-General.

Punishment is served out when such bodies do their job and expose the faults of their governments. 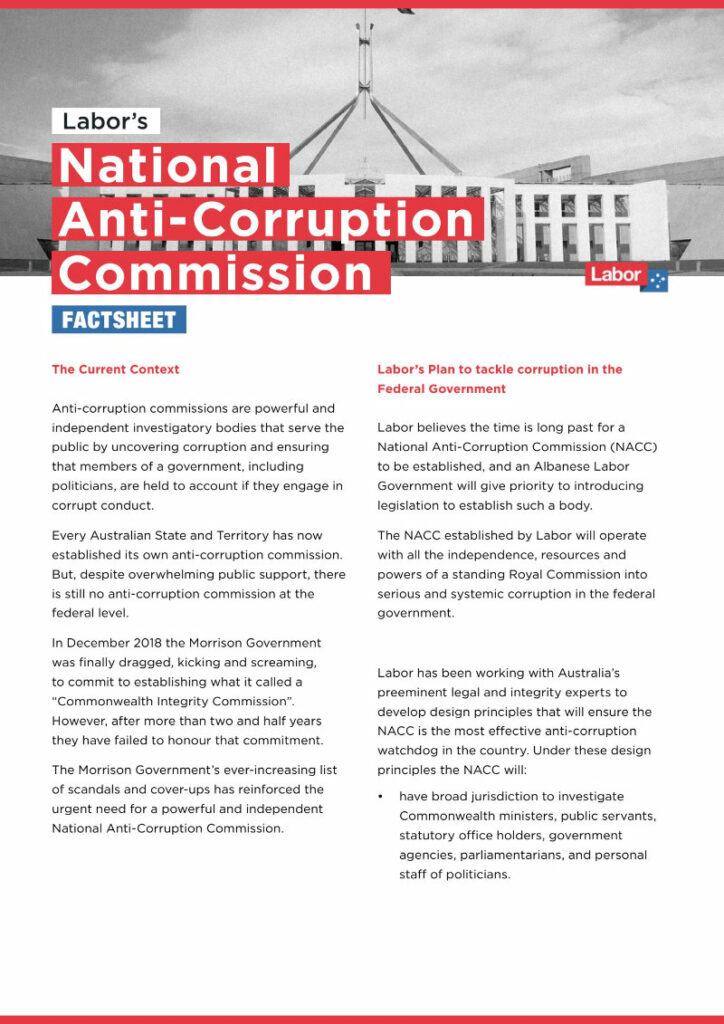