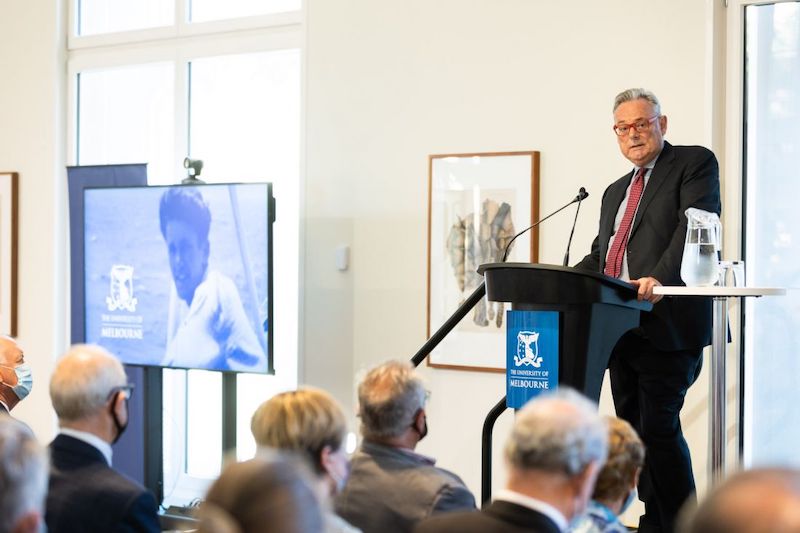 We are not much more than two years away from the real possibility that Donald Trump, or even some one more reckless, may be elected as president in the US.  Do we then just hang on for the ride wherever it takes us? (Image: about.unimelb.edu.au)

Today’s Australia is hard to recognise to that which Fraser had helped shape.  Today our world view is narrower, more fearful, inward looking, and mean.

Australian governments have for many years taken Australia in directions that appeal to the mob, but not to our better instincts.

It takes no courage and thus no leadership to stoke fear of the other, to set the community on edge, to find threats and enemies at every turn.

It takes little effort to craft a foreign policy which at its core depends entirely on a foreign power to look after us; strategic dependence as Fraser called it.  But what if that power one day decides it doesn’t want to or can’t look after us, or may never have had any intention to do so?

We are not much more than two years away from the real possibility that Donald Trump, or even some one more reckless, may be elected as president in the US.  Do we then just hang on for the ride wherever it takes us? This studied neglect of how America’s internal travails may affect its global and regional posture is deeply disturbing.

Where Fraser understood that the end of empire meant Australia had to find its own way in the region as a confident middle power that took control of its own destiny, today we rush to succour post-Brexit fantasies of a return of a Global Britain.

Following the US defeat in Vietnam, Fraser over the years came to doubt increasingly US resolve and its reliability as a guarantor of Australia’s security.

Donald Trump’s vigorous unilateralism, America First, and open disdain for allies would not have surprised Fraser.  And Biden’s retreat from Afghanistan after 20 years of war, leaving a country that was to be rebuilt in ruins, would have been depressingly familiar.

Australia’s failure to look after those in Afghanistan who looked after us would be viewed by Fraser as a serious lack of moral leadership.  He would have no time for bureaucratic obstruction to serve short-term political ends.  He would have mounted a concerted effort to accelerate checking and visa processing.  He would have sought to marshal the other western participants in Afghanistan to work together to do the same.  He would have had no truck with petty fogging when lives were at risk.

Fraser gave substantive and lasting effect to the end of the White Australia policy, raised Australia’s stature in the world through unstinting humanitarian acts, including championing the end of apartheid in South Africa, and opposing racism everywhere.  He accepted that Australia would need to ensure, through active diplomacy, its own security, and understood that Australia’s future was unalterably rooted in the Asia Pacific region.

He believed that he personally, and the nation as a whole, had a moral obligation to show leadership to make the world a better place.

This year’s Fraser Oration, delivered at the University of Melbourne on 17 February 2022, can be viewed on YouTube here.