Lies, lies, lies — and the lying liars who tell them 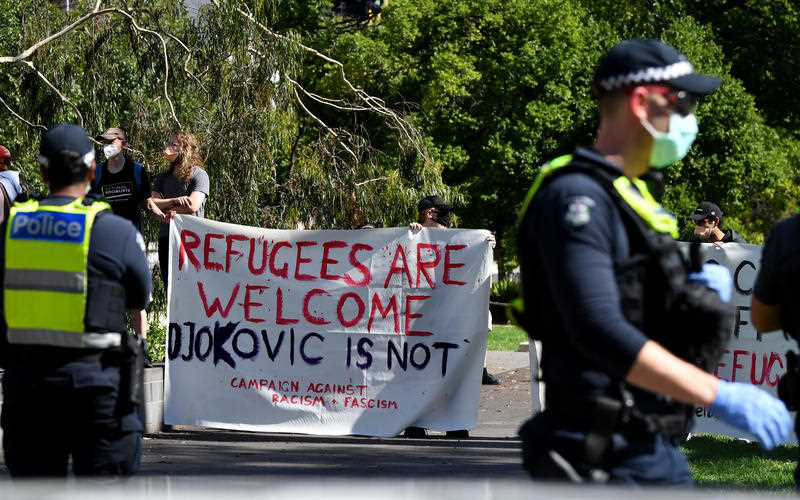 Politicians, predominantly on the right, have repeatedly been caught lying in direct contravention of video evidence. The falsifications aren’t minor.

In Canberra at the moment there is an almost total lack of accountability. Any effort to confront Prime Minister Scott Morrison or his cabinet with their lies, corruption and ineptitude is met with deflection to a disingenuous list of “achievements” or more lies. Without effective supervision and repercussions, the threat this poses to our democracy will only become more dire.

British Prime Minister Boris Johnson is potentially facing repercussions after years of lying to the electorate. Whether or not he does so, the damage to British democracy taking place under the Tories is confronting. In the US, Donald Trump’s lies have been embraced by the party he led and the majority of Republican voters. Deception is widespread in that party’s efforts to subvert the possibility of Democrat victories in the future. The American Republic’s democratic processes are already undermined; whether they will survive the next decade is in doubt.

From Plato’s time, philosophers have noted the instability of democracy. Its freedoms — including freedom of speech — are the seeds of its own destruction. Would-be tyrants and their propaganda have the capacity to end the system we prize, even without us noticing. Truth, and trust in what is being said, is crucial to the democratic system.

Deceit is at the heart of the problem. Sometimes it is the insidious propaganda that aims to (mis)represent our nations as well-run liberal democracies. At other times the stratagem is outright demagoguery that seems likely to end in bloodshed.

In Australia, Crikey in particular has been tracking the lies that mark Morrison’s government. While there has long been an expectation that politicians aren’t always truthful, the scope of deceit that has besmirched the performance of the Coalition, just like this era’s Republican and Tory parties, is enough to shove the timid media beyond euphemisms.

The brazenness of the deceit is the factor that has provoked that shift. Politicians — predominantly on the right — have repeatedly been caught lying in direct contravention of video evidence of their own previous statements. The falsifications aren’t minor: some are complete inversions of earlier positions. In America some Republican politicians supporting Trump’s Big Lie do so because they literally fear for their lives. Without an armed and angry base to threaten them back into line, Australian and British leaders have little justification beyond knowing that there are no consequences any more.

In January 2022, as Australians largely fail to find the rapid antigen tests (RATs) we need to participate in society in a pandemic, the government is running advertisements that boast it has them. Nobody is sure whether these are the collation of RATs that have been taken from private and public sector organisations’ deliveries, or an inflated boast. As with so many other (in)actions of this government, the disaster follows supply offers and warnings made months before, instructing the government that millions would be necessary. According to the AMA, the government refused to purchase them, wanting to let the private sector profiteer.

In the wake of the Park Hotel Djokovic drama, Morrison misinformed radio listeners about the refugee status of the people imprisoned for months in the Alternative Place of Detention (APOD). When confronted he disingenuously asserted he hadn’t “said” what he’d clearly implied. Given that the innocent men (some then boys) were placed in indefinite detention by Morrison as immigration minister eight years ago, his claim to vagueness on the cases seems disingenuous.

Over COP26 in Glasgow last year, the Australian delegation was reviled for its blatant climate action disinformation. French President Emmanuel Macron’s assertion that Morrison is a liar was confirmed by the Prime Minister’s former colleagues. It’s not just our own civic space under threat from constant deceit, but our standing among nations.

Part of the dissimulation is intended to suggest that the system is functioning well. In none of the three countries is that the case, and healthcare workers have been bearing the brunt of the pandemic mismanagement. NSW nurses held a stopwork protest in mid-January because their workplace is unsafe for them and their patients in the Omicron surge. Their exhaustion and the nurse-to-patient-ratio blowout are making hospitals dangerous. In the face of constant federal and state government mantras that they are coping, the nurses’ signs said they are not.

Rather than listening to poorly paid frontline workers exhausted by the third year of bearing the brunt, Josh Frydenberg mislabelled them “militant unions”. He hoped thus to nullify a cry for help for his voter base. The former “essential worker” praise was quickly inverted to disdain when the nurses drew attention to being Sisyphus borne down by the weight of government “let it rip” apathy.

The moment where the crisis of truth in “conservative” Anglosphere politics and some parts of the media became obvious might be pinned in 2016 when “post-truth” became word of the year. The fact that Trump’s victory and the Brexit referendum occurred in that year is not unrelated.

Many factors made the truth harder to detect at that moment: the swirl of social media disinformation; its targeting by bad actors like Cambridge Analytica; increasing competition in the attention economy; and the internet’s devastating impact on legacy media (partly celebrated initially because of the establishment’s own failures to convey truth, such as The New York Times and its assertion of the presence in Iraq of WMD).

It did not begin that recently, though. In 2004 George Bush adviser Karl Rove was alleged to have said that the US government did not function in the “reality-based community,” instead having the ability to “create our own reality.” Fittingly, he denies having said it.

The following year, commentator Stephen Colbert coined the word “truthiness” which became the American 2006 word of the year. It is intended to cover the sense or feeling that something feels true on intuition rather than requiring data to bear it out. It was meant to satirise the Tea Party development in Republican politics and its unhinged assertions. In Trump’s era, Kellyanne Conway called truthiness “alternative facts.”

Now Republican politicians and pundits spew the “blue lies” that divide tribes, and even the “accusations in a mirror” of total inversions of truth that precede horrors. Their followers often appear to see lies as weapons of war rather than necessarily a matter of sincerity. Verifiability does not matter as much hurting the loathed enemy.

The internet has unleashed those alternative realities. Right-wing thought leaders such as Joe Rogan on podcasts and YouTube and social media speak to millions around the world. They have a much more powerful impact than radio shock jocks or “conservative” media pundits. Provocative communications are shared to provoke “lib tears” and then these right wing figures “rage farm” the resultant furore.

Part of the long-term crisis is based in the role of PR in politics, with the right over the decades deploying increasingly effective marketing and communications strategies. Funded by the ultra wealthy and honed through free-market think-tanks, this strategy was intended to counteract alienating policies meant to benefit only the donors.

The Coalition government is much more concerned with messaging than being able to do the job of creating policy that benefits the country. It is aided by co-operative media that is satisfied to echo government talking points in gormless stenographic journalism. The fact that Morrison’s own marketing background is not strewn with successes might explain lacklustre efforts such as under-age forklift drivers.

Rather than finding strategies to solve the massive challenges of living through a pandemic, the government is involved with the spin project of their religious “freedom” bill or the ability to unmask anonymous “trolls” on the internet. This is intended to enable Coalition politicians to sue internet commentators for defamation if they expose government misdeeds. The point is to chill criticism of government (in)action, hardly consonant with their posture as “free speech” warriors. It sits well, however, with the government’s many efforts to prevent transparency over the years, including working to silence charities.

Structuring a narrative to sell a government as successful and a country as efficiently navigating difficult times is not the same as being successful or dealing with challenges. Lies and misleading messaging buttressed with strategies to silence criticism leave us with a crisis of trust, and with cynicism. This is combined with the swirl of internet misinformation centred in America but with enthusiastic adherents here. The result is a total inability to agree on a shared data-based reality that must ground our decisions as we face the much bigger crisis of the climate emergency.

The Coalition must confront its decision to pursue the American right into a focus on culture wars and spin. The US is proving to us that this divisive propaganda can only be destructive. We must transform the supervision of Australia’s federal government to ensure truth, integrity and accountability. Without those steps, we too risk losing our liberal democracy.