Media coverage of “solo lewd acts’ diverted focus from the real game – was there a cover-up of the alleged rape of Brittany Higgins?; no apology from Scott Morrison for fabricating an harassment claim; and there’s always room for climate denialism in The Australian.

The outrage associated with the “sex scandal” effectively diverted attention from what, arguably, remained the real story: the possible cover-up.

Phil Gaetjens, the secretary of the Department of Prime Minister and Cabinet, when fronting Senate estimates on Monday, March 22, confirmed he had paused his investigation into the alleged rape nearly two weeks earlier.

Scott Morrison had, in the interim, dodged questions about the inquiry, reporting that Gaetjens had not “provided me with a further update about when I might expect that report, but I have no doubt that the opposition will be able to ask questions of him in Senate estimates next week”.

The Liberal Party staffer and alleged rapist was fired due to a “security breach”. Yet Four Corners highlighted the flimsy (non-existent) nature of this claim: there was no security breach.

The program also exposed the fact that Gaetjens had not even interviewed the security guard working that night who had found Ms Higgins.

This was given sparse coverage; the outrage of van Onselen’s story drew all media focus, forcing Scott Morrison to front a press conference the next morning.

For a few moments he appeared emotional and contrite. But when asked about his own accountability, the tears disappeared and the daggers came out, publicising claims of an incident of sexual harassment that was apparently under investigation at Sky News or News Corp, accusing Sky political editor Andrew Clennell of hypocrisy.

Unfortunately for Morrison, his claim was almost pure fabrication, prompting a strong rebuke from the executive chairman of News Corp Australia.

The outrage that the Prime Minister would publicise such information forced an 11pm apology, which itself betrayed a lack of sincerity:

“I was wrong to raise it, the emotion of the moment is no excuse,” the PM said, abjectly failing to apologise for actually fabricating a claim.

Nonetheless, the press conference gave the media just enough material to continue spinning the “daggy dad”, “’Blokes can’t get it right all the time’” angle, while reducing his ludicrous claim to “[getting] the details wrong”, as per The Australian Financial Review’s Phil Coorey, or an “unfortunate deflection”, as per The Australian’s Peter van Onselen.

Meanwhile, Andrew Bolt at The Herald Sun reckoned the fault lay with “activists”.

And Andrew Bolt at The Herald Sun

Meanwhile, even as the scandals reached the pages of newspapers across the world, including Germany’s Der Spiegel, the Fin Review and The Australian dug in to defend the boss.

These mastheads were proposing a curious set of victories for the Morrison Government:

And after all these “victories”, a culture of harassment and alleged rapes is suggested to be a mere challenge of leadership, a political issue, not a cultural one.

A culture that Paul Kelly reckons is “unattainable”. Surely we can expect our Prime Minister, of all people, to refrain from fabricating claims of sexual harassment. 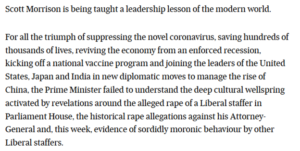 From Paul Kelly at The Australian

And the climate denialism

But there was, as always, room for climate denialism. As New South Wales experience yet another “once-in-a-century” event, the switch from uncontrollable bushfires to uncontrollable floods was apparently proof that the climate is remaining stable.