LOWY SURVEY-Donald Trump a ‘critical threat’ to Australia’s interests as trust in US hits record low.

Australians’ trust in the United States as a world leader has dropped to a record low as two out of five people consider President Donald Trump a “critical threat” to Australia’s interests, according to the latest Lowy Institute poll. 43 percent of those surveyed thought that Chinese President Xi Jinping would act responsibly compared with only 30 percent for President Trump.

The annual poll from the policy think tank surveys attitudes on a range of topics including world affairs, foreign leaders, climate change, immigration and democracy.

The 2018 report, released today, found Australians’ trust in the US to act responsibly in the world dropped from a peak of 83 per cent in 2011 to just 55 per cent this year.

The UK, Japan, France and India all recorded higher levels of trust, with China, Russia and North Korea falling below. 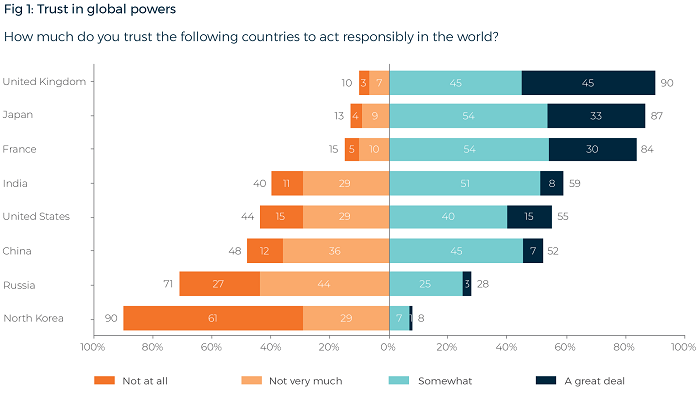 Lowy poll report author Alex Oliver said the results were a concern for both nations.

“The trust and confidence issues are early warning signals, the canary in the coal mine,” she said.

Lowy doesn’t ask the question on trust every year, but instead revisits it when it appears relevant again.

Trust levels were as low as 60 per cent in 2006 when George W Bush was US president, and rose significantly during Barack Obama’s terms, only to drop again under Mr Trump.

How much do you trust the United States to act responsibly in the world?

In the report’s preface, Lowy Institute executive director Michael Fullilove echoed this sentiment and wrote it was clear Mr Trump’s election had impacted the survey response.

“There is no question that Donald Trump’s presidency has eroded Australians’ trust and confidence in the United States as a responsible global actor,” he said.

The poll also surveyed Australians on how much confidence they had in world leaders to “do the right thing regarding world affairs”, with Mr Trump again falling below the leaders of the UK, France, Japan and India.

China’s President Xi Jinping also edged out Mr Trump, with 43 per cent of those surveyed thinking he would act responsibly, compared to just 30 per cent for the US President. 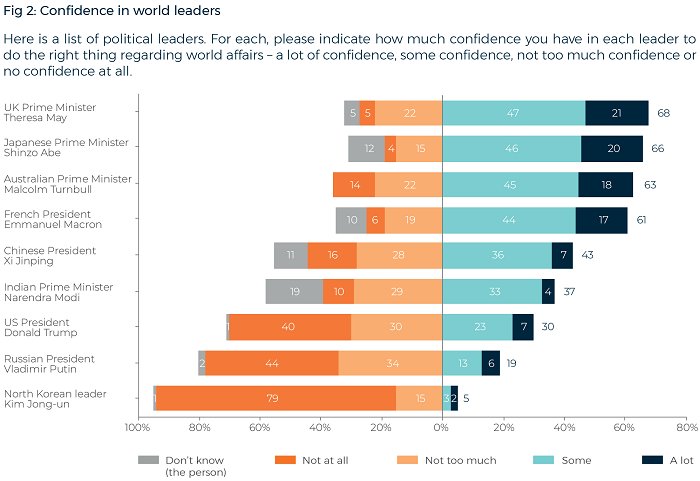 “At a time when world events are rapidly evolving and the global order appears to be shifting, Australians are placing their trust in Western allies and friends,” the Lowy report reads.

“The clear exception is the United States.”

One of the most significant findings of the report is 42 per cent of Australians listing the presidency of Mr Trump as a “critical threat” to “Australia’s vital interests” when presented with a list of possible threats.

This polled higher than other options, such as foreign interference in Australian politics and China’s growing power.

Some 76 per cent said it was either “very important” or “fairly important”, following similar trends in the poll’s 14-year history.

‘Washington is aware of the chill’

Political analyst Sara James is an award-winning American journalist who now lives in Australia, and said the rapid drop in trust in the US was significant.

“Nevertheless, a 28-point point drop [over that period] is not a step down, it’s a cliff, and governments notice cliffs.

“And believe me, people in Washington and in Canberra will be paying attention to that kind of drop. It’s significant.

“I would suggest there are people in Washington who are aware of the chill from some of those here in Australia.”

Ms James said the results of the Lowy poll reflected what some Australians were telling her: that they are uncertain about Mr Trump and are concerned about the direction the US is taking.

Closer to home, Ms James said people had expressed concern to her over the tense first phone call between Mr Trump and Prime Minister Malcolm Turnbull.

She said there was also a notable frustration that Mr Trump still hadn’t appointed an ambassador to Australia, and people were concerned at the President’s trade moves around tariffs.

The fact the trust figures slipped further from 2017-18 showed that rather than Australians warming to Mr Trump as they got to know him, the unease grew, Ms James said.

“If anything they doubled down. They weren’t in favour of Trump becoming president and that increased,” she said.

“The concern I’d say has been the unpredictability and volatility of this presidency. That’s been what I’ve heard on any number of topics.”

Despite the result, Ms James said this didn’t signal an end to the long-running relationship.

“Alliances and relationships are long, and there have been peaks and troughs over the years as certain presidents have been in power. 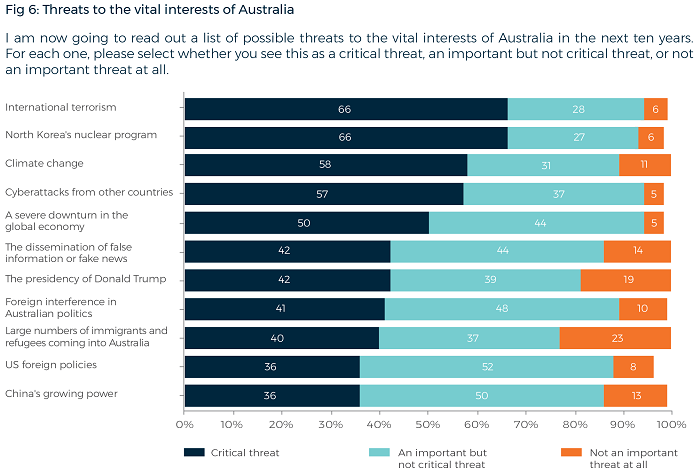 “I do not think it any way imperils the long-term relationship, but … it is a shot across the bow.

“It’s a warning sign that a lot of Australians aren’t happy, and more to the point they’re concerned.”