Lying in public view: Morrison takes his formula onto the campaign trail 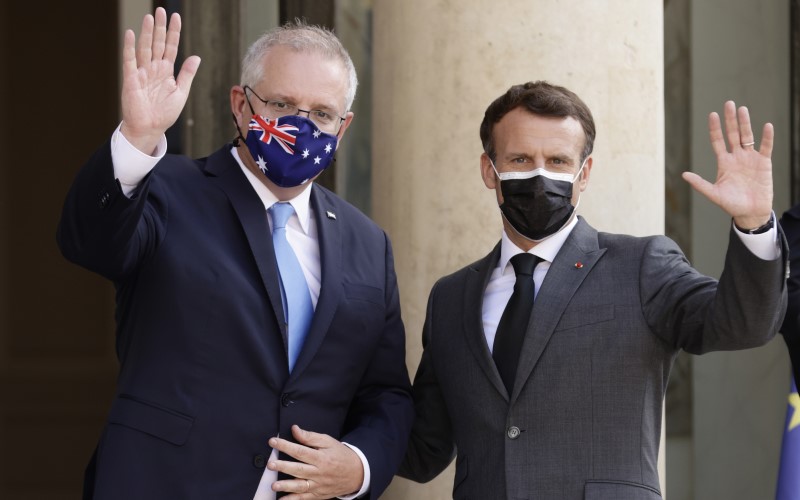 The prime minister has an untruth for every occasion, from climate conferences to radio chats. It is symptomatic of the increasing role of lies in all politics.

He has some gall. Prime Minister Scott Morrison, a person who finds the truth a creature best beaten, shunned and ignored, is now moving into what looks like campaign mode. At COP26 in Glasgow he sold the world a climate change model that kept company with countries where fumes linger stubbornly and fossil fuels burn bravely. He made sure to do it the “Australian Way”, ensuring that emission reduction targets would not so much be met as thoroughly “beaten” without the need for taxes. He spoke of technology unproven and made assumptions unfounded.

Before heading to Glasgow, Morrison, having done his bit of cross-dressing on the climate change front, was coy. He refused to reveal the modelling that went into the fabulous predictions of net-neutral utopia. But on his return, and after any sense of jet lag had been overcome, he was happy to promote the scanty details of an enterprise verging on a hoax.

Such efforts have become the stock and trade of a man habitually committed to the advertising message. At best, it is simple dissimulation; at worse — and here we find ourselves on difficult territory — it is mendacious. Little wonder, then, that critics have been coming out of late with a sort of adamant righteousness against the prime minister’s relationship with lying.

French President Emmanuel Macron has led the pack, letting the world know that he did not think Morrison was a liar; he knew he was. Deceived about Australia’s intentions regarding the now rescinded $90 billion submarine contract between Naval Group and Canberra, Macron singled out Morrison in an impromptu interview with Australian journalists at the G20 summit in Rome. The conduct of the Australian government had been “detrimental to the reputation of your country and your prime minister”.

Showing that this was not secret men’s business, a former prime minister and victim of a palace coup that saw Morrison come to power suggested much the same thing. Australia’s incumbent PM, claimed Malcolm Turnbull, had a reputation for being habitually dishonest. His conduct regarding the submarine deal with France had enhanced “his reputation for being untrustworthy”.

Morrison’s response has been all shrugs. It’s politics, and in the political jungle the thin-skinned will not outlast those with thick hides. “People take sledges at me all the time.” This gave him ample opportunity to lie about ever having told a lie. “Have you ever told a lie in public life?” inquired Melbourne radio host Neil Mitchell. “I don’t believe I have no, no,” came the reply.

Deputy Prime Minister Barnaby Joyce, as is often the case, preferred to be honest about such instances of mendacity: “If you ask me a personal question about my life, I don’t have to give you a straight answer. If you ask me something that’s none of your business, I’m going to tell you what you want to hear to get out of my face.”

Fairness and due process for a figure such as Morrison demand an understanding about the role of lies in politics. The recent fixation about his less than fond association with the truth is a reminder of the effort by The Washington Post to count the fibs of US president Donald Trump. In January 2021, its “fact checker” unit found no fewer than 30,573 “false or misleading claims” over the course of four years. “On November 2 alone, the day before the 2020 vote, Trump made 503 false or misleading claims as he barnstormed across the country in a desperate effort to win re-election,” it reported. Can the frail truth survive in a thriving economy of lies?

Devotees of the anti-lie cult have taken a near-fundamentalist line on the issue. The great 16th century French essayist Michel de Montaigne regarded lying as “an accursed vice. We are men, and we have relations with one another only by speech.” Lying and obstinacy were those faults that needed correction in a child. “They grow with a child’s growth, and once the tongue has got the knack of lying, it is difficult to imagine how impossible it is to correct it.”

Lying in politics is much a statement of fact as rising obesity levels in industrialised states. As that keen student of totalitarianism, Hannah Arendt, pondered, factual truth is ever at the mercy of the lie made in the name of political power. “Facts and events are infinitely more fragile things than axioms, discoveries, theories, which are produced by the human mind.” In his unsurpassed essay “Politics and the English Language”, George Orwell also reminds us with severity that political language itself “is designed to make lies sound truthful and murder respectable, and to give an appearance of solidity to pure wind”.

Such conduct is inherent between political leaders, so much so that international relations theorist John Mearsheimer found little literature in his field on it. His own contribution was to come up with seven different types of lying, including fearmongering, inter-state lies, nationalist myths and strategic cover-ups. Ever contrarian, Mearsheimer sees instances of lying — notably between the leaders of countries — as less frequent than commonly assumed. Leaders are more likely to lie to their constituents than their counterparts, which is hardly reassuring to fans of Montaigne.

The standard of politics and public life is low and finding distinguished figures who fail to deceive their electorates is a task doomed. Political endeavour remains the featherbed of mendacious undertakings. But to make such a fuss about being a liar in politics is exactly the sort of thing that is unlikely to affect Morrison. He is seemingly immune, his armour a prophylactic against veracity.