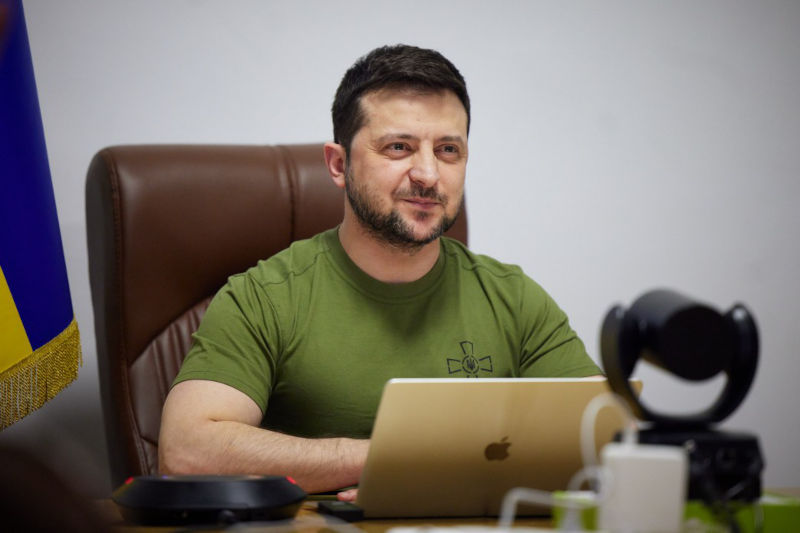 revealed that he is no longer pressing for Ukraine’s NATO membership. Image: Wikimedia Commons

What was the need for all that happened in the period since mid-December when Russia transmitted to Washington its demands for security guarantees? This question will haunt US President Joe Biden long after he retires from public life.

The foreign-policy legacy of his presidency and the reputation of this much-vaunted 80-year-old politician with a half-century’s record in public life, much of it supposedly in the domain of American foreign policy, are in tatters – irreparable.

News has appeared that Ukrainian President Volodymyr Zelensky has conceded that he is willing to concede to the Russian demand that his country will not seek to become a member of the North Atlantic Treaty Organization.

The announcement came early this week in an interview with ABC News where he revealed that he is no longer pressing for Ukraine’s NATO membership.

In fact, Zelensky let the cat out of the bag by casually adding, “I have cooled down regarding this question a long time ago after we understood that … NATO is not prepared to accept Ukraine.”

Zelensky explained why: “The alliance is afraid of controversial things, and confrontation with Russia.”

This comes after his earlier revelation that he is “open to compromise” on the sovereignty of the two breakaway republics of Lugansk and Donetsk in the eastern Donbas region and on the status of Crimea.

ABC News reportedly telecast the interview on Monday night Eastern Time. Since then, the duo in the Biden team who piloted the Ukraine strategy, those apocalyptic “sanctions from hell” and the demonization of Vladimir Putin through the recent months – Secretary of State Antony Blinken and Undersecretary of State Victoria Nuland – are nowhere to be seen.

That duo of Eastern European descent in the front seat – Blinken driving and Nuland by his side navigating him – ought to offer an explanation for this charade playing out, which is virtually demolishing American prestige as a superpower.

There are questions galore. Principally, if it is so easy to work out a compromise over Russia’s legitimate security demands, especially regarding Ukraine’s NATO membership and the alliance’s further expansion, why was Biden so very stubborn in his refusal even to discuss it, given the urgency of the matter?

Can it be that Biden was acting smart to create a fait accompli for Moscow by formalizing Ukraine’s membership at the forthcoming NATO summit on June 29-30 in Madrid?

What’s the need to destabilize the European economies and rock the world oil market at a juncture when most economies are entering a path of post-pandemic economic recovery?

What explains this unnatural obsession on the part of Biden over Ukraine’s regime?

Why such visceral hatred on Biden’s part toward Russia, something unworthy of an 80-year-old world statesman?

Why is it that the economic war against Russia has become such a very personal affair for Biden, as his White House speech on Tuesday shows?

But such an ignominious end to this entire episode over Ukraine’s NATO membership was entirely to be anticipated. Fundamentally, this is an existential issue for Russia, whereas Biden, Blinken and Nuland are dilettantes sitting 10,000 kilometers away indulging in old neocon pastimes of interfering in other countries’ internal affairs, threatening them, disciplining them or punishing them for defying America’s diktat.

Even after Zelensky spoke, what has been Biden’s reaction? He scheduled a speech to announce that the US shall no longer import oil from Russia. Shouldn’t he have heaved a sigh of relief that this war in Ukraine is petering out?

Instead, he resorted to this strange toothless measure to impress the American audience that he is still on a winning streak promoting democracy in faraway lands. Isn’t such a gimmick an insult to the gullible American public?

Biden took this new step after Europeans told him plainly that they are not interested in such a move against Russia, given their heavy reliance on Russian oil.

Second, Biden doesn’t seem to know, or has pretended otherwise, that America is actually shooting at its own feet. For Russian prices are highly competitive and American companies will now have to pay much more to source heavy-grade oil suitable for their refineries.

Biden already swallowed his pride and sent a team of officials to Venezuela, a country under crippling US sanctions, to beg for oil from President Nicolas Maduro (who was on the Central Intelligence Agency’s hit list not too long ago for being a socialist) to replace Russian oil.

Maduro sent them back suggesting a broader mutually beneficial relationship between Venezuela and the US. All this drama took place in broad daylight witnessed by the entire Western Hemisphere. Wouldn’t they be laughing that America’s president is a man of straw?

Biden claims he is making sure that Putin won’t have money for his “war machine” if America stops buying oil from Russia. This is laughable, bordering on a lie.

The US was purchasing about 12% of Russia’s total oil exports. All right, that’s a decent figure. But it isn’t as if Russia won’t have any other buyers in a world market where the oil price has soared close to US$130 per barrel (thanks to Biden’s “sanctions from hell” against Russia).

Surely, any number of potential buyers would queue up if Russia were to offer competitive prices (as it had been doing for the US companies) to divert the extra stocks due to Biden’s boycott.

At any rate, Biden can’t be unaware that Russia’s current budget is balanced on the belief that oil prices would be around $40-$45 per barrel. With the current level of oil prices, Russia is actually making a fortune. And the funny part is, it is a gift from Biden’s sanctions.

Fundamentally, the problem is that the American elite is delusional. While the rest of the world knows that in a multipolar world, the United States’ capacity to force its will on other countries is inexorably in decline, the American elite shut their eyes to that reality. The present ridiculous situation was only due to this arrogance and self-deception.

The strategic defeat that Washington has suffered will dent US prestige worldwide, weaken its trans-Atlantic leadership, unravel its Indo-Pacific strategy, and accelerate the drain of American influence in the 21st century. The Biden presidency will carry this heavy cross.

This article was produced in partnership by Indian Punchline and Globetrotter, which provided it to Asia Times.

M K Bhadrakumar is a former Indian diplomat. Follow him on Twitter at @BhadraPunchline . His diplomatic career included assignments on the territories of the former Soviet Union and to Pakistan, Iran and Afghanistan. Other overseas postings included South Korea, Sri Lanka, Germany, and Turkey.