Youth have borne the brunt of the Covid-19 pandemic and the resulting recession. Hearing from young people is therefore more important than ever, yet their representation in the media is minuscule and dropping, according to a recent report. News Corp’s widespread use of damaging stereotypes about young people was also notable.

The difference in coverage couldn’t have been more stark. Earlier this month, Covid-19 was taken on a journey around the Northern Beaches of Sydney, allegedly by a couple in their 60s and 70s who failed to self-isolate while awaiting their Covid-19 test result, according to News Corp’s The Australian. But this part of the story was swiftly moved off the front page.

Compare that treatment with the hostility afforded two teenage girls who tested positive for Covid in Brisbane after taking a trip to Melbourne. The headlines in News Corp’s stable of newspapers were excoriating: “Enemies of the State” (The Courier Mail); “Dumb and dumber” (The Herald Sun); and “Bags of trouble: teen trip ends in cluster” (The Australian). Their faces and names were plastered across the front pages. 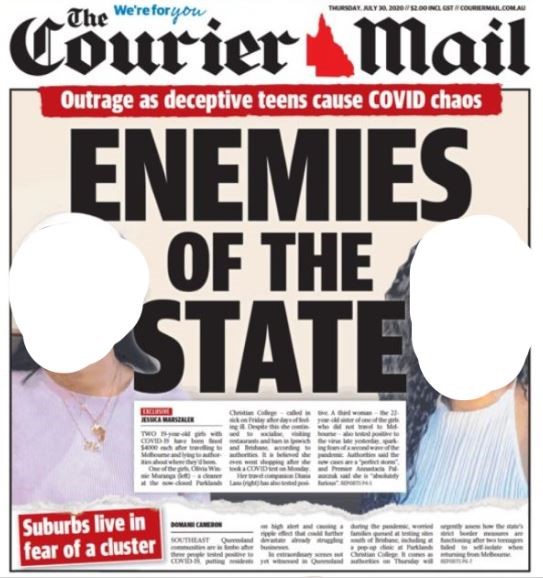 Then just last week, NSW’s Health Minister Brad Hazzard urged “young people” not to be complacent, even though the Northern Beaches cluster was sparked by an older couple.

Such media treatment provides more evidence, if any were needed, to back up the findings of a recent report, Missing: Young People in Australian News media. The report found widespread use of negative stereotypes in the mainstream media, when it actually bothered to cover issues that affected young people. Young people featured in less than 3.3% of the articles analysed, a decrease of 14% from the same period in 2019.

Young Australians have been most hit financially by the pandemic, as economists and think tanks have repeatedly pointed out. The Grattan Institute has estimated those aged 15 to 24 will be the hardest hit by the unemployment crisis, while research from the Tax and Transfer Policy Institute based at the ANU has found that young people and those who are poorest are effectively bankrolling the advantages enjoyed by older people.

Yet the report found that Baby Boomers received the most positive coverage (31%) across stories about economic wellbeing and only 26% negative coverage. Meanwhile, 71% of articles that mentioned Gen Z were negative, featuring unsubstantiated claims or an absence of quotes or case studies from this cohort.

Use of stereotypes matters

The report analysed 685 articles published by the six publications regarding use of stereotypes. Five recurring stereotypes about young people were identified:

News Corp’s coverage appeared the most egregious. The Australian used stereotypes in 75% of its coverage and The Herald Sun 61%.

The Australian referred to youth as entitled (15% of the articles analysed), as lazy/lack resilience (13%); can’t make right decisions (12%); and are criminal/dangerous (5%).

The Herald Sun used the criminal/dangerous stereotype in 35% of the articles analysed.

In contract, in 77% of the ABC coverage analysed, no stereotypes were used.

As the report notes:

“When young people don’t see themselves represented in the media, they turn away from it as a trusted news source.”

The report also noted that some 59% of headlines mentioning young people were not supported by quotes or case studies in the article. As the report notes:

Representation without voice can be more detrimental than no representation at all, and unsubstantiated reporting can contribute to the perpetuation of stereotypes.