Maria Kalesnikova: Amazing courage for Belarus and beyond 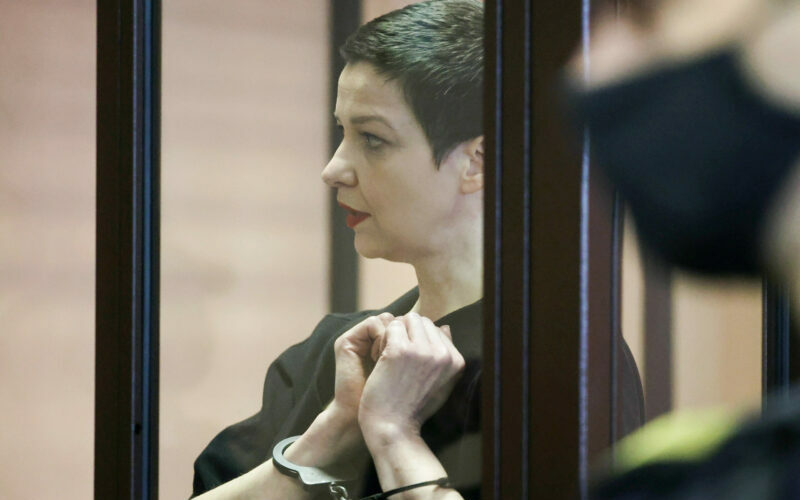 In democracies, there are few risks in challenging abusive policies, though courage to do so is often missing. Yet in a brutal, dangerous country, young Belarusian leader Maria Kalesnikova is displaying that indispensable quality.

Faced with the certainty of arrest, Kalesnikova had every chance to leave Belarus but chose to stay. During attempts to deport her, she is reported to have torn up her passport and remained defiant.

After a year of protests stifled by police brutality, by the arrests of thousands and the detention of 650 political prisoners, Belarus is outwardly quiet, a country ruled by fear. Dictator Alexander Lukashenko enjoys his alliance with Russia and claims that protesters were “foreign-backed criminals”.

To face danger, to choose imprisonment, is a choice few would make, but for Kalesnikova, indifference to a repressive regime had become intolerable. If she was not outraged by human rights abuses, including the fake claims about Lukashenko’s election in 2020, she would have lost touch with her own humanity: “I consider my decision to participate in the campaign the most important and responsible one of my life … My love for Belarus and the Belarusian people didn’t allow me to stay aloof.”

In response to her 11-year sentence, she insists, “It’s worth it…my conscience is clear.”

The nature of courage

Kalesnikova’s courage derives from love, from music, and from commitment to dialogue, a complete contrast to a dictator’s isolationism to preserve himself and stay in power.

In several plays, Shakespeare insisted that a prerogative of the brave was to exhibit love. Long before the bard gave that advice, the Greek dramatist Euripides, albeit speaking of men not women, crafted the idea that courage required perseverance, trust and hope.

Between the bars of her jail cell, Kalesnikova has appeared defiant — laughing, smiling, showing her hands shaped as a heart.

Music mixed with politics is a bank in which humanity can always invest. Kalesnikova knows the record of classical composers, probably Sibelius’ composition Findlandia, a plea for freedom for the Finnish people against Russian control and censorship, or at the height of Stalinist tyranny, Shostakovich in Leningrad conducting the first performance of his 5th Symphony, to which the audience wept.

In 2017, Kalesnikova spoke in Germany on Beethoven and about the colourfully dressed punk rock band Pussy Riot singing in a Moscow cathedral, “Mother Mary, please drive Putin away”. As a flautist in her country’s philharmonic orchestra, she knew the creativity and skills of individual musicians would be expressed through the discipline of a team. In the Belarusian protest movement, having realised the paradox that individual initiatives depend on collective endeavour, she became a leader who did not want to be one.

The promise in the musical and political career of this Amnesty International prisoner of conscience, appears in a video, posted to YouTube, of a nine-year-old Kalesnikova performing the legendary Edith Piaf’s “La Vie en Rose”, “seeing life in rosy hues”. As an adult, Kalesnikova interprets the Piaf high notes as a love for humanity being indispensable in politics.

At the end of World War II, judged by many an anthem of hope after trying times, Piaf sang that endless nights of love bring great happiness, that “pain and bothers fade away, happy so happy I could die?” or originally, “Les ennuis, les chagrins s’effacent, heureux, heureux à mourir”.

The content of courage is evident in the contrasting views of power of musician Kalesnikova v dictator Lukashenko: curious, creative perspectives pitted against dominating self interest, commitment to dialogue and inclusiveness opposed to an isolationist thug in a rule bound regime.

Kalesnikova challenges state violence. To protesters for democracy, Lukashenko seeks revenge. Newspapers are closed. People are dying in prison. There is no investigation of police brutality. Protest is squashed. Citizens are arrested for wearing red and white socks, the colours of the Belarusian flag.

From her prison cell, Kalesnikova seeks an international response to dictatorship. She challenges, “Even outside Belarus, people can do a lot … it is important to continue opposition.”

Another brave prisoner has addressed the young woman in her Belarusian cell. Nelson Mandela insisted that struggles to attain human rights must be universal. In a lifetime confronting abusive power he learned, “force to solve problems is barbaric and destructive” yet with courage, “you can achieve not an absence of fear but a triumph over it”.

Following vicious police crackdowns against the Belarusian protesters, seven countries demanded the release of Kalesnikova and all political prisoners. No immediate demand came from Australia.

From Perth, Belarusians have expressed disappointment that this country has been slow to respond, though the Department of Foreign Affairs and Trade produced the unexceptional, no risk statement: “Australia supports an outcome that respects the democratic aspirations of the people of Belarus.”

In a world of authoritarianism, of governments’ taste for secret trials, their fascination with violence to human rights protesters and to planet earth, humanitarian alternatives are an urgently needed panacea. Shared, socially just futures require visions fuelled by Kalesnikova-like courage for love, for music and for her people.

Her courage has world wide implications. She has much to teach. We have much to learn.