Critics of Malaysia’s longest-serving prime minister, Mahathir Mohamad, used to joke that he would like to be prime minister for life. Today, that prediction may have a ring of truth, although others believe the incumbent PM, Najib Abdul Razak, would like to stake the same claim. 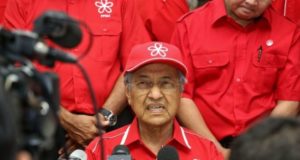 The issue is to be decided on May 9, when the country’s 13 million-odd voters go to the polls in the 14th General Election to decide who will hold a majority of the 222 parliamentary seats. The opposition faces real difficulty. Gerrymandering has tilted the election to the point where the government could remain in power with 40 percent of the votes, and the government is awash in funds to run the election

In his quest to drive Najib from power, the 93-year-old Mahathir, disillusioned with corruption in the Barisan Nasional, or national ruling coalition, has taken charge of the reeling opposition Pakatan Harapan (Alliance of Hope) coalition, which had been badly damaged by the defection of the fundamentalist rural-based Parti Islam se-Malaysia over religious issues. PAS, as the party is known, was a crucial element in the opposition because of its organizational and religious ability draw voters from the kampungs.

Deep appeal in the kampungs

Mahathir, with his deep appeal to ethnic Malays, who make up more than 60 percent of the country’s population, is a master tactician and strategist regarded as best placed to destroy the United Malays National Organization, the party that has been the de facto ruler of the country since independence 60 years ago, and which he ran for 23 years with an iron fist.

Although he is known for the affirmative action policies that created ethnic Malay privilege, many non-Malays still revere him and claim that despite his draconian rule, many could conduct their businesses profitably and without undue interference.

Ethnic Malays, especially those from the rural areas, have profound respect for Mahathir. He gave them an identity and assured them a slice of the Malaysian economic pie, which before his premiership was divided up by the business-minded Chinese.

The youth respect him as the father of modern Malaysia. The landmarks – Kuala Lumpur International Airport, the 88-storey Petronas twin towers, the north-south motorway, the Proton national car, the Formula One racing circuit and Langkawi’s LIMA international airshow, have Mahathir’s fingerprints all over them.

Out to end corruption

Today, Mahathir wants to change the Malaysian leadership, for reasons which resonate with the electorate and the opposition, and to bring an end to corruption and kleptocracy and restore what the opposition regards as the country’s good name. he claims he was forced into the driving seat for change because many issues had been brought to his attention by concerned people from within Najib’s camp, as well as by prominent businessmen.

Needless to say, Najib and the party he leads, UMNO, don’t agree.

Najib’s handling of the Federal Land Development Authority, known by its acronym FELDA, has prompted comparisons of father and son’s leadership styles. FELDA was a godsend for the rural folk, and a lifeline set up by Najib’s father, Razak Hussein, Najib’s father and the country’s second prime minister. It is FELDA where Mahathir is seeking to make his biggest impact.

Under the scheme, small plots of land cleared from virgin jungle enabled destitute Malay smallholders to own land, cultivate cash crops and contribute to the nation’s economy. But FELDA Global Ventures, launched in 2007, is Najib’s scheme to securitize the land development scheme and enter global markets. It is a completely different entity from his father’s creation.  Gullible farmers were told that they would become millionaires, albeit paper millionaires.

Razak told the rural farmers FELDA would make them part of the Malaysian economic miracle. Najib, his son, told them that the world was their oyster, and that securitization would make them global players.

Prices go down, too

The global economic recession and epic mismanagement turned many of these farmer-turned-shareholders into paupers when share prices dropped. They no longer own the plots and the shares are not worth the paper on which they are printed.  Poor farmers did not realize that share prices go up, and down.

In reality, only a select few at the top of FELDA made fortunes out of the sweat of these gullible farmers. Isa Samad, whom Mahathir once warned Najib to ban from UMNO, was one of the key alleged conmen in the FELDA scam. Mahathir has crisscrossed the FELDA areas preaching hellfire and damnation.

When he left office, critics say, Mahathir had already earmarked his successors, the ageing Ahmad Abdullah Badawi, and the relatively youthful Najib, then in his early 50s, as seat-warmers for Mahathir’s own son, Mukhriz, who would then step comfortably into the prime ministerial seat.  When Abdullah Badawi failed to rise to Mahathir’s expectations, Mahathir’s doubts about Najib were already growing. But Mahathir led the charge to drive Abdullah Badawi from office and replace him with Najib.

Toward the end of his tenure, Mahathir disapproved of Anwar Ibrahim, then a charismatic young leader and UMNO finance minister, who was becoming more popular than he was. Ignoring the rules of power, Anwar attempted to outshine his master, ensuring that his days were numbered. Charges of corruption and sodomy sealed Anwar’s fate, charges that international human rights organizations have labeled baseless.

Today, the irony is that Mahathir has vowed to seek a king’s pardon for Anwar, who has been imprisoned on a second charge of sodomy in a case that is regarded to have been engineered by Najib and which also has been widely regarded as trumped up to wreck a potent political career.

Anwar’s family, as well as various people ranging from opposition politicians to academics whom Mahathir jailed under the draconian Internal Security Act (ISA) in 1987 have decided to work with the former premier against their common enemy, Najib.

When Najib failed to turn up at a forum called “Nothing-to-Hide,” Mahathir was given a standing ovation while Najib was given a drubbing. The Johor Crown Prince immediately became the idol of disgruntled Malaysians after he excoriated Najib. The rakyat claimed he had their best interests at heart.

That all changed two weeks ago, when the crown prince did a U-turn and told Malaysians to reject Mahathir and not rock the boat, but to allow the embattled Najib to remain in charge. He assured them that he and his father, the Sultan, had their best interests at heart, and would guide them through rough seas.

That failed to appease the rakyat. More revealing was that many Malays openly voiced their displeasure with the royal interference in politics. Worse was to follow. It became known that a company closely linked to the Johor palace had been awarded an RM8.7 billion contract the day before the crown prince’s about turn.

With his reputation in tatters, the crown prince visited a mall and announced that he would pay for each person’s groceries to the tune of RM3,000, until 8 pm that night. This was no impromptu act, said a shopper. The scramble for freebies was likened to well-dressed refugees stampeding a UN lorry delivering drinking water. The nation was shocked. The gesture designed to rake back the crown prince’s reputation had backfired. He was accused of bribery and robbing people of their dignity. The other royal households watched in quiet disbelief. Their fortunes are intertwined. The damage had been done.

Today, Malaysians wonder if Mahathir will clip more than just the royal wings if he and the opposition take charge after GE-14.

Najib could be living on borrowed time. UMNO is being sued as an illegal organization because it has refused for three years to hold internal elections, with Najib seeking to quell a rebellion over the persistent 1MDB scandal, in which the equivalent of US$4.6 billion disappeared through theft and mismanagement from the state-backed investment vehicle. Sixteen UMNO members took the case to the High Court, and in an unprecedented move, the courts moved at lightning speed to hear the case in a few days’ time.

UMNO has broken the law and Malaysians know that the courts will do as Najib bids. The question is, what will be the reaction of the rakyat. Will they just sit back and accept this, or will they demand that justice is served?

Mahathir’s place in Malaysian political history has come full circle. The man whose father saved him from the political wilderness – and who Mahathir groomed to become prime minister – is the one whom Mahathir seeks to destroy. The man whose imprisonment Mahather engineered on what are regarded as trumped-up sodomy charges is the one whom he hopes to help to release and eventually win a royal pardon. Most of the people whom Mahathir divided over race and religion are solidly behind him.

This article was first published in Asia Sentinel on the 30th of April, 2018.