Marles has a bob each way, backing PNG on Bougainville but not China on Taiwan 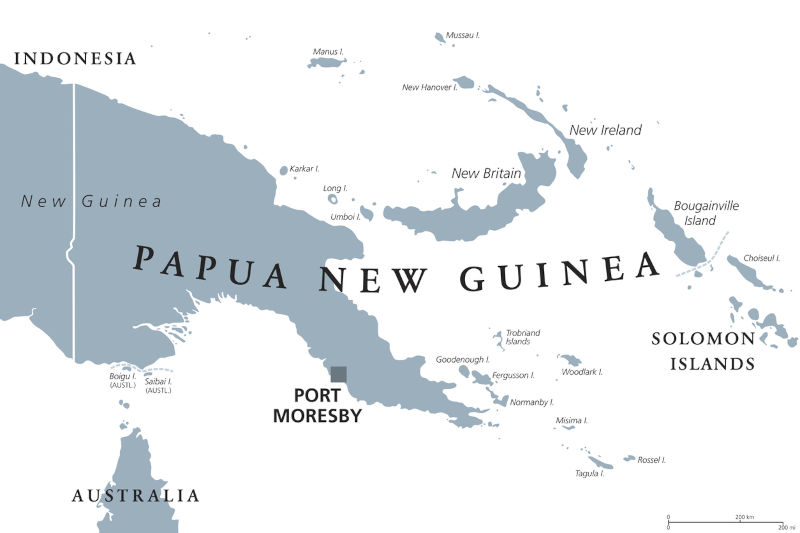 The angry reaction to Richard Marles’ comments should be a warning to Canberra about the need to settle past grievances.

During a visit to Papua New Guinea earlier this month by Australia’s Deputy Prime Minister and Minister for Defence Richard Marles, a newspaper report on one of his press conference answers sparked a stinging reaction from Bougainville President Ishmael Toroama. In response to the 13 October article, headlined “Aust backs PNG on B’ville” and including a comment from Marles that “our job is to support Papua New Guinea and that’s what we are going to do”, Toroama issued an “angry” statement, warning that Marles was making “veiled threats”. A week later, Toroama addressed the Autonomous Bougainville Government (ABG) legislature, accusing Marles of “a calculated move to intimidate Bougainville” and “trying to influence Bougainville’s right to self-determination”.

Formerly head of the Bougainville Revolutionary Army (BRA), Toroama has long been committed to peace. But like many who fought in the BRA, he has reason to be suspicious of Australia.

Marles had been asked Australia’s policy on how PNG and Bougainville should deal with Bougainville’s demands for early PNG recognition of its independence. Toroama’s apparently extreme reaction points not just to current sensitivities on the independence issue, but also a much longer history of Bougainville resentments in relation to Australia.

Marles’ deep interest in PNG goes back to a high school visit when he was a student and grew while he was Parliamentary Secretary for the Pacific under the Rudd/Gillard governments, when he also showed strong interest in Bougainville. His mid-October trip was focused on Australia-PNG relations, and not Bougainville, but it appears that he was caught off balance by questions about the independence issue.

Toroama’s response reflects grievances originating in unhappy memories of Australian colonial rule from 1914 to 1975. Racism by many Australians, and domination of the Bougainville economy by outsiders (mainly Australian plantation owners and Chinese storekeepers) were among deeply resented aspects of colonialism. In 1962, Bougainvilleans asked a visiting United Nations mission for transfer of the UN mandate over New Guinea from Australia to the United States.

The imposition of the huge Panguna copper and gold mine, operating from 1972 to 1988, was almost universally opposed by customary landowners from soon after mineral exploration began in April 1964. Bougainville leaders regarded the mine as forced on Bougainville by the Australian colonial administration for the benefit of both PNG and Bougainville Copper (BCL), then the majority owned subsidiary of Conzinc Rio Tinto Australia. Although Australia had no BCL shareholding, Bougainvilleans perceived BCL as Australian government owned.

Australia rubbed salt into the wounds by its active support of PNG in the violent Bougainville conflict from 1988–97, during which Bougainville made yet another unilateral declaration of independence in May 1990. Throughout, Australia’s policy emphasised respect for PNG “territorial integrity”, seeing Bougainville’s political future as an internal PNG matter.

Support from Australia for PNG’s military efforts to end the secessionist uprising included PNG Defence Force training, provision of helicopters (used by the PNGDF – against what Australia had declared to be its wishes – as gunships), and the supply of weapons and other equipment. Highly visible to Bougainvilleans, especially BRA fighters, this support was a source of both new resentments and deep suspicion of Australia’s motivation.

For the whole of the 1990s, well into the Bougainville peace process that began mid-1997, Australian policy on PNG territorial integrity remained unchanged. In January 2000, PNG and Bougainville were in the midst of two years of negotiation to end the violent conflict. Bougainville was demanding PNG agree to a binding referendum on Bougainville independence. Concern about increased hostility to Australian aid contractors and Peace Monitoring Group personnel in the wake of a New Year 2000 release of Australian archive documents from 1969, seen in Bougainville as proving “suspicions” of Australia then blocking secession aspirations, saw Australia no longer insisting the issue was an internal matter for PNG alone. The then foreign minister Alexander Downer later said that the change meant: “Australia would [now] accept and support a political solution negotiated by the parties” (emphasis added).

While that policy change did not entirely end Bougainvillean suspicion, its positive impact on attitudes contributed to Australia being able to play an “honest broker” role at critical points in the peace process.

The most significant contribution involved Downer’s mediation in December 2000 resolving a stalemate over Bougainville’s demands for a binding independence referendum. Downer persuaded the Bougainvillean leaders to accept a non-binding referendum by pointing to the 1999 East Timor referendum, which was non-binding on Indonesia but because the vote was overwhelmingly pro-independence, the international community ensured the outcome was honoured. Bougainville leaders accepted that as an assurance of Australian support for honouring the outcome if the ultimate referendum vote in Bougainville was overwhelmingly for independence.

Downer’s compromise proposal was accepted, the two sides agreeing that a referendum would be held, but deferred for an extended period, and with the outcome non-binding. Instead, it would be followed by PNG-Bougainville consultations. Ironically, the conduct of those very consultations, part of an Australian-proposed compromise, is now contributing to the heightened sensitivity of Bougainville independence issues, evident in the adverse reaction to the report of Marles’ answer.

Suspicion of Australia reduced but never vanished after the 2000 policy change, being palpable still, especially among former BRA members and supporters. There is a sense among Bougainville leaders that despite the overwhelming result of the 2019 referendum in favour of independence that Australia has not honoured the assurance Downer was seen to have given to support the outcome, undermining their trust in Australia.

In a post-conflict situation in Bougainville, there is strong customary impetus for reconciliation between those divided by the years of violent conflict. Bougainvillean leaders talk often about the need for reconciliation among key actors. This includes with the PNGDF, in which some progress has been made, and the Australian government, in which there has been none.

It is against this politically charged background that Marles mis-spoke in his press conference. In saying, as the full transcript shows, that “our role is to support the Prime Minister and the government of Papua New Guinea in the decisions that it makes in respect of the future of Bougainville, and we stand ready to do that,” he made no mention of Bougainville’s role in the negotiations. In Bougainville’s eyes, Marles was reverting to the pre-2000 Australian policy position of emphasis on, and support for, PNG territorial integrity.

This was compounded by the presentation of the story in the Post Courier newspaper, which unfortunately on the same page carried another story about Marles seeking a “renewed Australia-PNG defence agreement”. For Toroama, the unintended proximity of the two stories raised the spectre of support for the PNGDF becoming part of the support Marles had indicated Australia could offer in relation to a unilateral PNG decision on Bougainville. Presumably that is why Toroama accused Marles of making “veiled threats”.

Bougainville’s current leaders assess Australia’s preference to be for Bougainville to agree to remain a part of PNG, and that view as undermining Australian neutrality. The report of Marles’ answer not only accentuated long-held suspicions of Australia but added an element of serious concern about Australia’s current intentions. One outcome has been to reinforce anti-Australian views among political and bureaucratic leaders. It could also encourage calls to follow Solomon Islands in seeking support from China. Bougainville leaders have previously advocated the idea of seeking significant Chinese development funding, one example being statements by 2020 presidential candidate and former BRA commander Sam Kauona.

Marles, for his part, sought quickly to walk-back from what he was quoted as saying following Toroama’s 14 October statement. Marles’ office issued a response, but only to the few Australian journalists that had reported the episode following the press conference. There had been no change in Australian policy, the statement from Marles’ office said, and Australia would support “whatever political settlement is agreed by the parties”. A subsequent letter to Toroama from the Australian High Commissioner to PNG was in similar terms, as was a High Commission Facebook post that also featured a photo of Marles and Bougainville Regional Member and Minister for Internal Security, Peter Tsiamalili Jnr.

Unfortunately, the re-statement of Australia’s 22-year policy position was not reported in PNG media. The distinction between an Australian policy of supporting whatever political solution the two parties agree, as opposed to one supporting and assisting PNG alone in whatever it decides on the issue, seems to have been lost on the media.

The distinction is, however, clear to the ABG leadership. The situation would have been best handled by an immediate public statement by Marles that he mis-spoke and making an apology for the confusion caused. That he has not personally made a clear and widely distributed statement on the issue only fuelled suspicions about Australia’s attitude.

It is too late for such a statement now. Rather, what is needed is a focus on rebuilding relations. Early visits to Bougainville by Marles and perhaps also by Foreign Minister Penny Wong would be in order, in the process emphasising Australian neutrality on independence and willingness to assist in the ongoing consultation process.

While the notion of a formal reconciliation between Bougainville and Australia may be difficult for people in Canberra to understand and embrace, committing to such a process would in fact be the best basis for a re-set of the relationship. Fear of creating financial liabilities by doing so should not be a concern, for Bougainville powerful customary reconciliation culture generally does not involve large compensation demands. An Australia serious about engaging positively with its Pacific neighbours should be open to participation in such a process.

Without serious efforts to reduce suspicion of Australia in Bougainville, relations will remain strained, the position of radical elements in Bougainville will be strengthened, and Australia’s ability to again play an honest broker role will be all but lost in relation to one of the more difficult issues facing the region.

Anthony Regan is a constitutional lawyer, who has lived and worked in Papua New Guinea for 17 years, where he was a lawyer for various government bodies, and taught at the University of Papua New Guinea. He has undertaken constitutional advising work in Uganda (full-time for over three years, 1991–94), Timor Leste, Fiji, Solomon Islands and India (in relation to resolution of the Naga secessionist conflict). He has been a long-term adviser to the Bougainville parties during the Bougainville peace process, and 2002–04 was an adviser to the Constitutional Commission and Constituent Assembly that developed the Constitution of the Autonomous Region of Bougainville.