The millions of people protesting in different Latin American countries have a variety of complaints. A main one in Chile and Colombia, is the lack of equality of opportunity which is normally provided by good public education. In those countries, the rich are educated in well-resourced private schools while the poor are sent to second rate and poorly resourced public ones. Apart from the social tensions that such segregation and inequality creates, the country misses out on the benefits that clever children from poor families can provide.

I studied at a school that had its football field on a ridge, with one goal higher than the other. It was not that steep, but it was enough to give the uphill team an advantage. To compensate for that inequity we changed sides for the second half.

The sloping football field (and without changing sides) is a good metaphor for Colombian society: some people are tougher than others and for that reason the weaker miss out. Some of that is inevitable, because it is in human nature: some are more intelligent, more committed and more talented than others, and that is why they do better. But the great inequalities do not come from genes but from society itself, in the way our community life is organized.

In Colombia, social class and geography can save you or sink you: it is not the same, for example, to be a poor, indigenous woman, subsisting on the land in a forgotten lane in the Cauca province, and to be a rich white man living in the salubrious Bogotá suburb of Rosales. The rich white man can be an idiot, but is more likely to rise through the ranks despite his inabilities, and the poor indigenous woman can be a genius but will never prosper despite her talents. The price paid by our society is measured by the very high number of potential leaders who never get there, and of the irredeemably mediocre ones that end up being in charge.

Rules of the game were invented to mitigate these inequalities, such as the one required by changing sides on the football field. Every society must do something like that. For that reason, we have the constitutional principle of equality of opportunity, which in practice means, among other things, the right to receive a quality education.

In Colombia, we are a long way from guaranteeing that right. Here an educational apartheid predominates: each social class studies separately and receives a different service. The rich with the rich in good schools and the poor with the poor in bad schools. I am simplifying things, but not all that much.

It is true that, in the last decade, educational coverage has expanded, but without increasing quality, and it was hampered by social segregation. When I studied at the school on the sloping football field, in the 70s, the son of a farm hand or labourer who managed to finish high school rose to the middle class. Today, to achieve that same goal, he would need to go to a quality school, usually private and expensive.

Free and good public education is the main leveller of the playing field: it offers everyone the same preparation to face professional life; it brings together children of all social classes for many years, and instils in them the culture of being a good citizen in a spirit of coexistence and equality. In Colombia, the rich and the poor not only receive different formations, but they never live together. They never relate as equals. Needless to say, this lack of connection is a serious problem for a democracy.

Last Thursday, I marched in the general strike (just before writing this) to protest against the educational apartheid that prevails in Colombia. I did it as a citizen, not as a representative of any political, educational or union group. I also did it to defend peace, and to demand that this Government comply with the peace agreements with the FARC. In the midst of war there is no equity or possible progress. It’s like a football game that has a couple of thug players who beat their opponents to bits, without the referee doing anything. This should not be allowed either.

Mauricio García Villegas is a Professor of Law at the Universidad Nacional in Bogota Colombia and Honorary Fellow of the Institute for Legal Studies at the University of Wisconsin-Madison, and is a regular columnist for El Espectador, Colombia. This article appeared on 24 November 2019, and was translated by Kieran Tapsell. https://www.elespectador.com/opinion/nivelar-la-cancha-columna-892340 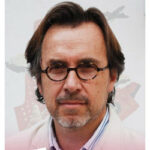