President Trump has foreshadowed tariffs of 25% on all imported steel and 10% on all imported aluminium, reversing America’s historic commitment to free trade and proper governance in trade policy. It is also repeating an action taken by George W Bush in 2002 which completely failed and was reversed in 2003.

In what has become a characteristic of Trump’s modus operandi he convened a meeting of steel industry executives and, with minimum policy preparation and analysis and no consultation with trading partners, used the photo opportunity to announce the intention of imposing the tariffs. At that stage, the policy and legal work required for the tariffs being imposed had not been completed. In making the announcement he made clear that he would not exempt any country for if one were exempted, all others would line up for similar treatment and metals would end up being shipped through exempt countries. This would indicate that despite whatever Trump may have said to our PM there will not be an exemption for the Australian steel and aluminium industry.

Trump’s authority to impose the tariffs stems from a Commerce Department investigation that reported in January this year, concluding that imported metals threatened national security by degrading the American industrial base. This is very convenient but not very convincing, noting that the vast majority of imports are from US allies and that China is a relatively modest exporter of steel to the USA.  Imports of steel by country are shown in the figure below. Australia comes in at a rank of about 21 and hence in absolute terms is a modest exporter to the USA but nevertheless, in terms of domestic Australian production, it is a significant amount. 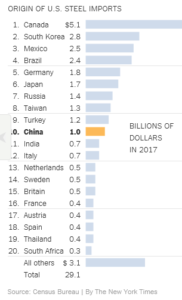 This action is a far cry from Trump’s promise on day one of his presidency to label China a currency manipulator and impose a 25% across the board tariff on all Chinese imports to the USA. Putting aside that this action is over a year since he was made President, the scope is quite different, not targeting China but all trade partners in the metals area. This change in scope is clearly linked to the attempt to stick with the rationale of the action being a national security measure and hence applying to all imports of metals and not just to those from China which is a relatively small exporter of steel to the USA.

The proposal to impose tariffs on metals has been the subject of an internal debate within the White House between  Gary Cohen, director of the National Economic Council , who opposes such measures, supported by the State Department and the Pentagon, and   Robert Lighthizer, the chief trade negotiator, supported by Wilbur Ross, the secretary of Commerce, who are championing the tariff increases. The debate has led to consultation with manufacturing industry more generally who strongly oppose the tariff increases as they increase their cost structure and reduce their competitiveness.

In commenting on his decision Trump tweeted that “ our steel and aluminium industries ( and many others) have been decimated by decades of unfair trade and bad policy with countries from around the world. We must not let our country, companies and workers be taken advantage of any longer”. That sounds very much like a traditional protection rationale rather than an argument based on national security.

It is very clear that Trump and his trade advisers are what is termed mercantilists, which is the doctrine prevalent from the 16th to the 18th centuries that trade generates wealth by the achievement of balance of trade surpluses and hence the objective of policy should be to stimulate exports and discourage imports. That, of course, leads to protectionism. This was displaced as a theory of trade by the principle of comparative advantage developed by the English economist David Ricardo and published in 1817. This states that the purpose of trade between regions or countries is to improve economic efficiency and living standards by improving the allocation of resources in regions in regions and countries by focusing on those areas of output and services where they have a comparative advantage. Thus the objective is not to accumulate exports and discourage imports but rather export those goods and services in which you have a comparative advantage and import those goods and services which you can source elsewhere at a lower resource cost than you can produce.Businessmen like Trump can have difficulty understanding or accepting this approach in much the same way as they believe that exploiting monopoly power and reducing competition is a good thing, noting that imposing additional tariffs is a way of reducing competition and hence imposing a tax on consumers.

It is also important to note that by definition the current account deficit on the balance of payments is exactly equal to the gap between domestic saving and domestic investment. That means that the total deficit on the balance of trade is a function of this American savings gap. In that case, protective mechanisms cannot alter the deficit unless they indirectly affect the savings gap, probably by reducing investment. The exchange rate plays a role in maintaining this equilibrium, but not even Trump can control the real exchange rate. All this, in turn, means that protective measures of whatever kind can affect the structure of production, imports and exports, but will not much affect the total balance of trade. This negative trade balance will only be reduced back towards zero balance if US investment and incomes fall, or alternatively, Americans save more of their incomes. However, increased saving is likely to start adjustment processes that will be difficult and risks a return to the stagnation that the US has experienced for the last decade. What is more likely in fact is that the balance of payments deficit increases as US savings remain low, investment is increased by the tax and fiscal measures and net imports increase.

Republicans criticised the announcement. Senator Orrin Hatch of Utah, the chair of the Senate Finance Committee called the tariffs “a tax hike the American people don’t need and cannot afford”. The action certainly goes against the grain of Republican orthodoxy which is strongly for free trade, as is the case, in the main with the  Democrats. This has been a remarkable week for Trump in defying Republican orthodoxy, following his strong criticism of the National Rifle Association and calling for gun controls. It is only to be hoped that Trump takes action in this area but I suspect nothing will occur.

The tariff move is in my view strategically and economically irresponsible. Rather than boosting American industry and the economy it is likely to have the opposite effect. Imported steel and aluminium to the USA is used in the manufacturing of cars, consumer durables etc, some of which are purchased domestically and some of which are exported. In effect, the tariff is a tax on American manufacturers and American consumers.Given the scale of steel and aluminium production and employment relative to manufacturing, the impact will be negative for industry and the economy. Moreover, the US steel and aluminium industries do not have the capacity to increase their market share substantially as the large integrated metal mills were closed in the late 19070s and early 1980s. While there is some excess capacity it will take time to ramp up and in the meantime, it is more likely that the metal producers will instead increase their profit margin rather than their output.

Beyond the direct impact of the tariffs is the potential further negative impact of retaliatory action by trading partners. Already the European Union has stated that it is considering its options including retaliatory actions. Both Canada and Mexico can make a strong case that the tariffs are in violation of the North America Free Trade Agreement (NAFTA) while other exporters to the USA can and should mount a case against the USA with the World Trade Organisation. In principle, the actions are in violation of the USA’s obligations as a member of the WTO. While it is true that the WTO does allow countries to pursue trade measures in their national security interest, such actions are rare and are closely examined by the WTO given that this rationale could be pursued by all countries if it supported the case for the USA. Furthermore, the way that the USA has proceeded with the tariff increase with no apparent consultation with the WTO and trade partners is a poor reflection on the USA and its relations with trading partners. This combined with the statements of Trump in support of the tariffs, which are very much about protecting American jobs rather than being motivated by national security considerations, would suggest that it is very likely the USA would lose any dispute brought to the WTO on this matter.

What has been forgotten in the reaction to the announcement is that there is a past example of such action being undertaken by America which failed completely. In 2002 George W Bush brought in tariffs on steel imports of between 5% and 30%  with certain countries exempt, principally Canada and Mexico due to provisions of the NAFTA.This action was very much motivated by political considerations relating to the States in which the steel plants operated and over the objections of manufacturing industry. The action resulted in a loss of domestic manufacturing jobs which were estimated at 200,000 and as a consequence had a negative impact on American GDP. The European Union announced it would impose retaliatory tariffs and a case was filed with the WTO. In November 2003 the WTO concluded that there was no valid basis for the tariff increase as there was no evidence on dumping of steel in the USA market and hence the USA was in violation of its obligations. The WTO said it would impose a $2billion fine if the tariff was not removed. In December 2003 the tariff increase was removed. It will be interesting to see if history is repeated and if so it will be a very poor reflection on the White House though reflecting a President that has no interest in either history or economics.

I would like to thank Michael Keating for his helpful comments and suggestions.