MICHAEL PASCOE. RBA awakes – Australia is not getting the wage rise it needs

The laws of supply and demand for labour are broken. The Australian economy is not getting the wage rises it needs and there’s no sign of that changing.

That means the federal budget’s rosy forecast of sustained above-trend economic growth won’t come to pass. It means the Reserve Bank won’t get inflation back into its target zone and therefore interest rates don’t rise. And it means societal dissatisfaction about how wealth is shared continues to worsen.

Reserve Bank Governor Philip Lowe laid bare the labour market wreckage with a single graph during a speech to Australian Industry Group on Wednesday. He overlaid the Australian Bureau of Statistics’ wage price index with the results of the NAB business survey question on whether the availability of labour was a constraint on output. 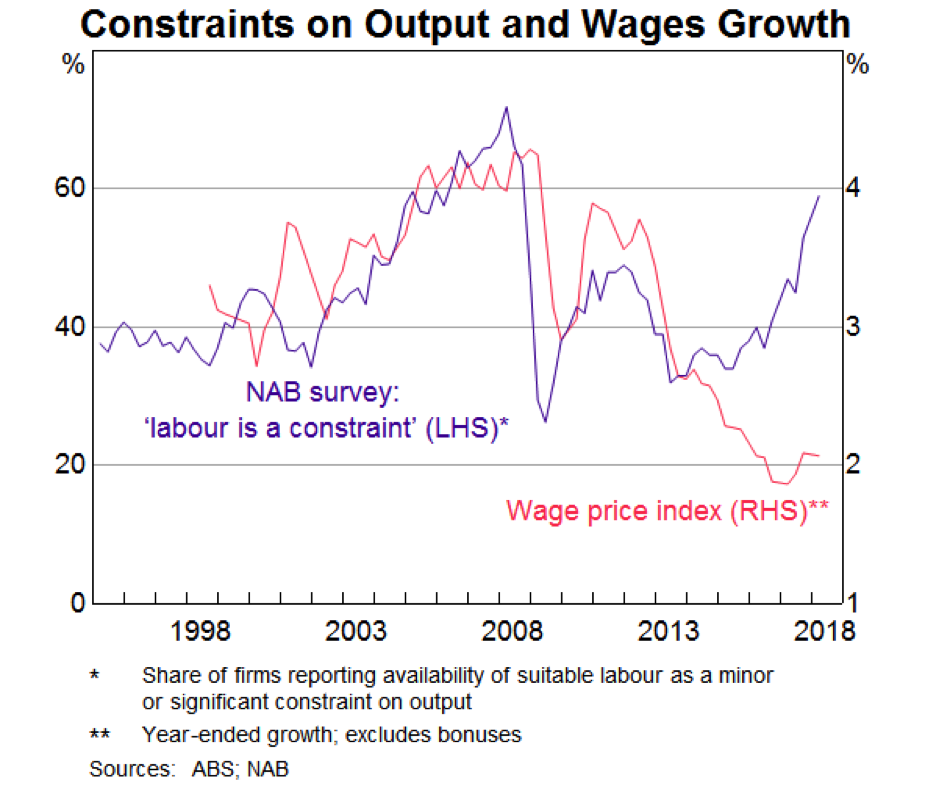 Since Adam Smith was a boy, a shortage of supply results in a higher price. The lines of Dr Lowe’s graph appropriately correlate – until 2014.

Most obviously, as the difficulty of finding appropriate labour increasingly began to bite from 2015, the wage price index increasingly defied the most fundamental law of economics by falling away.

Nearly 60 per cent of businesses surveyed by NAB are reporting the supply of labour is constraining their output, a level only exceeded for the couple of boom years immediately prior to the GFC. Yet the wage price index is showing growth of 2.1 per cent.

And that number is the rosy side. The annual wage price index growth for the private sector was just 1.9 per cent and the March quarter national accounts showed “average compensation per employee” was up by only 1.6 per cent over the year.

The governor said stubbornly low wages growth of around 2 per cent had helped boost employment over recent times, but was also keeping inflation too low, meant real debt burdens stayed higher for longer and “Beyond these purely economic effects, the slow wages growth is diminishing our sense of shared prosperity. If this remains the case, it can make needed economic reforms more difficult.”

The governor’s understanding of the problem has come a long way over the past 11 months. Last July, he gave a speech largely devoted to the wages problem that completely ignored two key structural factors: the loss of labour’s bargaining power and the entrenched corporate culture of cost cutting.

Yesterday, he acknowledged both in trying to explain our current predicament.

Dr Lowe still believes in the laws of supply and demand.

“In my judgement, a return, over time, to a world where wage increases started with a 3 rather than a 2 is both possible and desirable,” he said.

“To be clear, this is not a call for a sudden jump in wages growth from current rates to 3-point something. Rather, we will be better off if this increase takes place steadily over time as the economy improves.”

In RBA-speak, “over time” means an indeterminate but lengthy period. The bank’s latest forecasts don’t guess the inflation rate will crawl above 2 per cent until June 2020 – a time far enough away to make the prediction vague indeed.

The RBA’s biggest concern before wages growth bogged down was the failure of non-resources investment to spark as resources investment fell. Search parties were sent forth every quarter for several years in search of the missing animal spirits. They kept returning empty handed despite plentiful labour, cheap money and fiscal stimulus.

That corner has finally been turned – the animal spirits are investing again.

Now the RBA is beating the bushes in search of wage rises. The searchers are keen to clutch at whatever straws they can gather.

To wit another graph, showing the bank’s own business liaison program questioning companies about their expectations for wages growth.

The governor was keen to point to more firms now expecting wages growth to rise than fall. That looks like calling the glass “nearly 30 per cent full”.

The graph still shows more than 70 per cent of firms not expecting wages growth to pick up. 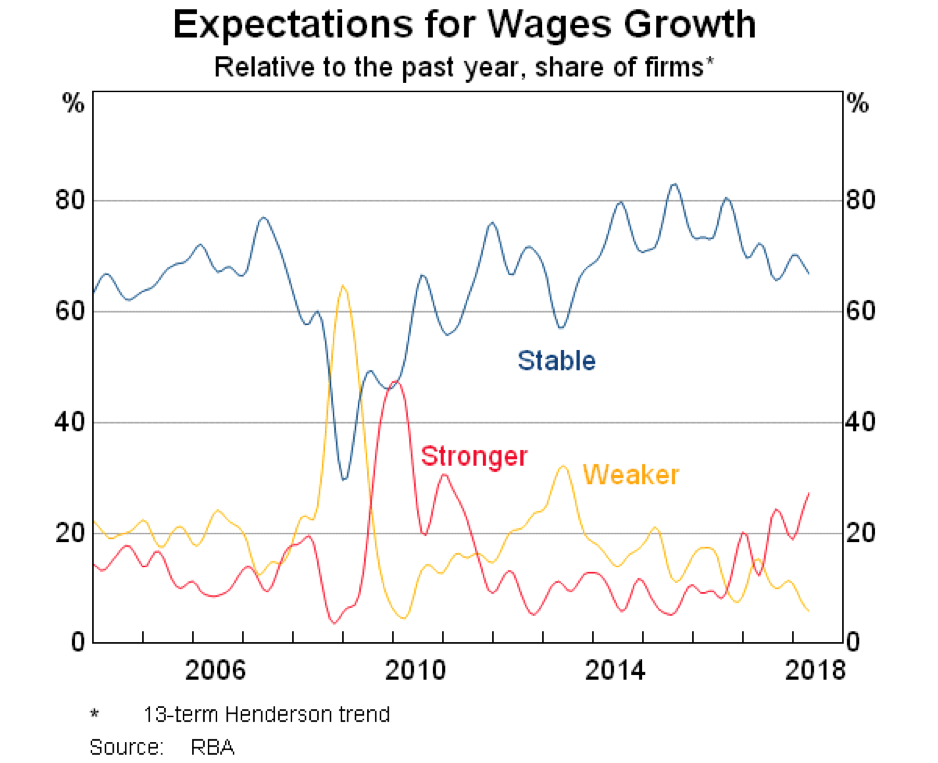