MICHAEL PASCOE. Why now is definitely not the time to scrap negative gearing (The New Daily, 21.09.18)

Conventional and entirely reasonable wisdom holds that the middle of a drought is not the time to develop drought policy – but that is what we appear to be headed for with Scott Morrison’s “drought summit”.

What could be worse is implementing housing policy that was developed at the peak of a passing housing price bubble. And that’s what Labor is promising to do.

When Sydney and Melbourne prices were skyrocketing, generating everything from inter-generational warfare to an anti-immigration groundswell, restricting negative gearing to new properties made sense as part of a package to remove some of the tax-influenced tilt in the housing market.

And, given that it was combination of the 50 per cent capital gains discount and negative gearing that lit the latest housing price fire, it was reasonable to review the size of the discount – a discount that inherently advantages the better off.

All other things being equal, Labor’s negative gearing changes by themselves would matter little, especially as the policy would be grandfathered. Credible research at the time it was announced found as much, unlike the predictable baying of the government.

But all things are no longer equal – and timing does matter with the introduction of policies that shift taxation goal posts.

The polls are saying we’ll have a Labor government at the next election. Polls this far out can be wrong, but for the sake of the argument, let’s consider a Shorten/Bowen government in May.

The current correction in Sydney and Melbourne housing markets is unlikely to be over. Investor interest has already been curtailed by regulator-enforced credit tightening and many investors having the brains to realise the party is over for the time being.

Those two factors have reduced the need for restricting negative gearing. There’s also a delicate balance between a reasonable soft landing of the housing market in our two biggest cities – the steady correction we seem to be having – and a harsher downturn that could damage the economy and housing availability.

Labor’s housing proposals, like the Coalition’s grab-bag of housing bits-and-pieces in the last budget, don’t begin to address the broader housing affordability problem. The individual policy ideas might be reasonable by themselves, but they don’t add up to much. 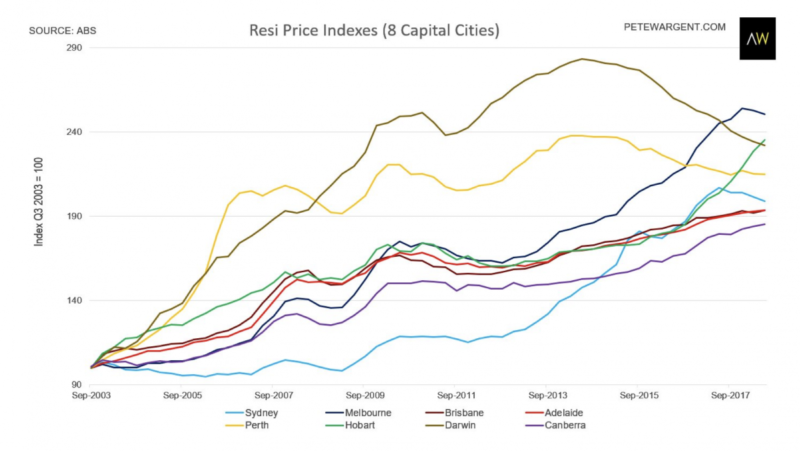 And not surprisingly, coming down from that high has meant the areas with a loans-in-arrears problem are WA and regional Queensland, as shown in another Wargent graph. 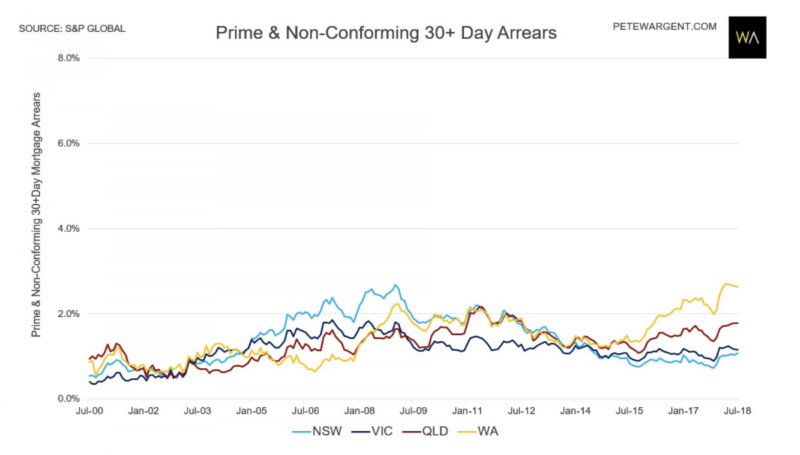 For all the appalling efforts of 60 Minutes to scare people and misrepresent the views of people the program interviewed, the evidence isn’t there of people in the biggest markets not coping with mortgages in significant numbers.

From a policy point of view, you wouldn’t want them to. And you would want the soft landing to run its course. Investors need no further discouraging.

The proposal to halve the capital gains tax discount – meaning tax would be paid on 75 per cent of capital gains, instead of the present 50 per cent for assets held more than 12 months – is a bigger sleeper.

As a matter of tax equity, it’s difficult to explain why a brickie should pay twice as much tax on what he earns for his labour building a house compared with what he might earn speculating on the house rising in value.

But the CGT discount policy reaches much further. Like the negative gearing restrictions, it would be grandfathered – it would not apply to existing assets. It would make investment relying on capital growth – most obviously residential real estate – less attractive when the market is already doing the job.

Labor has time to sort out its tax policies. It needs to. It badly botched its announcement of limiting franking credits for those who don’t pay tax. It’s also all over the place on the CGT change by exempting small business assets and superannuation funds. The last thing the Australian tax system needs is more itsy-bitsy policy with exemptions here and thresholds there.

And the Law of Unintended Consequences is always hard at work. Reducing the CGT discount for shares would mean even more pressure to maintain high dividend ratios when franking credits have done that job in spades.

Labor has been brave to tackle tax reform when the Coalition has walked away from it, but in politics, as in life, timing is everything.

After the housing market stabilises, limiting negative gearing as part of a broader tax reform package would be sound policy – but it would be wise to wait for that stability.

As to what would really make a difference to housing affordability and household debt levels, well, that’s another story.