What an outrage it is that the Northern Territory doesn’t lift its grape production, instead of importing wine from South Australia! And what about those lazy Tasmanians; rather than growing their own mangoes and pineapples they import them from Queensland! Michael West reports on the bizarre claims of the gas lobby.

It might sound absurd but this is precisely what the gas industry and its political apparatchiks would have Australians believe. Frack, they say. Tear up precious farmland in NSW and Victoria. Ramp up gas production in NSW and Victoria, or Queensland will be forced to “export” the stuff back to them.

Never mind that much of the gas is piped up to Queensland from the Bass Strait anyway. Never mind that the southern states have plenty of gas, never mind that Australia’s energy policy is so non-existent that we are now about to import our own gas back from overseas.

As brazen PR spin, this gas lobby “southern-states-are-selfish-bludgers” proposition ranks right alongside the coal lobby’s timeless assertion “Aussie coal is good for the poor people of India”. Still, it has got the better of our elected officials.

And so they demur. Despite clear evidence on the other side of the country, in Western Australia where they have a Domestic Gas Reservation policy, that earmarking gas for local consumers keeps prices down, and keep costs lower for every consumer and every business in Australia. Yet the cabal of just four giant corporations is playing Australians for fools.

We say a cabal of four because Exxon and BHP have joint marketing arrangements so they can be considered, for the purpose of competition laws, to be one.

They’ve got our politicians hoodwinked. Resources Minister Matt Canavan claims supply will drop sharply, even though it is slated to rise. ACCC chief Rod Sims reckons southern consumers should have to pay to ship the gas back down from the boondocks of Wallumbilla in Queensland, although it is piped straight past them on the way up to Queensland in the first place. More on this later.

Santos boss Kevin Gallagher is touting cheaper gas if Narrabri is opened up for coal seam gas, although this is high-priced gas which we don’t need because Australia is swimming in the stuff. More later.

Let’s demolish this caboodle of cartel claims one by one with the assistance of gas analyst Bruce Robertson’s latest report for IEEFA, Towards a Domestic Gas Reservation in Australia.

But there is no market, only a cartel, and all that extra supply is exploited by the gas majors to profit at the expense of consumers. The myth of the south eastern states not producing sufficient gas

The fact is, gas production from the south eastern states of NSW, Victoria, Tasmania and South Australia is above the levels needed to supply these domestic markets.

The Australian Energy Market Operator (AEMO) shows, in its Gas Statement of Opportunities 2019, that gas consumption in the south eastern states is below what is produced there. In 2018, actual production was 433 Petajoules (PJ) and consumption just 431PJ.

Gas production in the southern states of Victoria, Tasmania, NSW and South Australia grows in the forecast period. It is expected that gas production will grow by 5 per cent from 433PJ in 2018 to 456PJ in 2022.

Surplus production in the southern states should grow more strongly than production as demand for gas falls. We have already seen major declines in industrial demand for gas in 2019 as industries such as Claypave, RemaPak and Dow Chemicals shut their doors in part due to high gas prices.

High gas prices have hit demand for domestic use and for gas powered generation. Gas use for electricity production has fallen. Gas is not a “transition fuel” for Australia. It is too expensive.

Gas use at ten year lows

Gas usage for power generation is at its lowest level in a decade, at just 7.9 per cent of the National Energy Market (NEM) in 2018 (see Figure 3). While wind and solar have increased from less than 0.5 per cent to 11.9 per cent over the last decade, gas usage has fallen. 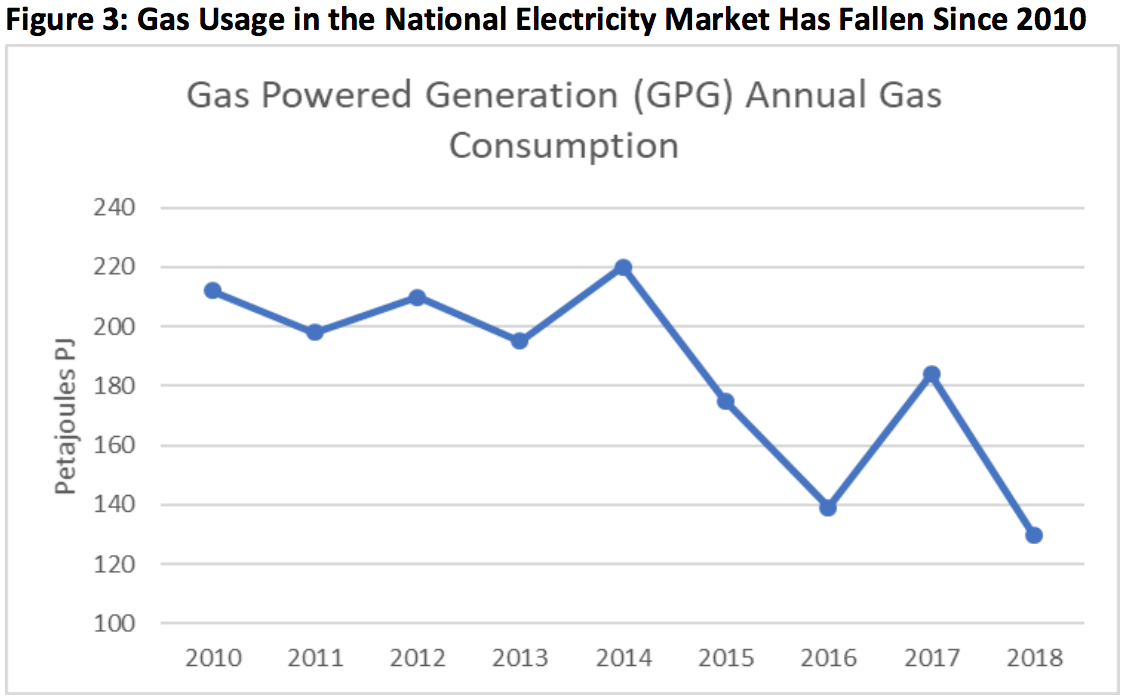 In 2016 Incitec Pivot built a new fertiliser plant in the US rather than in Australia citing high domestic gas prices in Australia as one of the reasons for relocating its operations.

Several gas users have already closed down during 2019 (a period of just six months). According to the ACCC:

“In January 2019, RemaPak, a producer of polystyrene coffee cups in Sydney, went into administration. RemaPak’s energy costs increased by 400 per cent in a space of just three years and it could no longer effectively compete against importers. In late March 2019, Claypave, a Queensland based bricks manufacturer, also announced that it had entered into voluntary administration, citing rising energy costs, including gas costs, as a factor.”

Recently, another company announced it is shutting down. Dow Chemical in Melbourne is closing, in part due to high gas prices.

Gas demand from the industrial sector has tumbled 14 per cent since 2014, although the worst is yet to come, as legacy low-priced contracts roll off and companies are forced to pay globally uncompetitive prices or shut up shop. 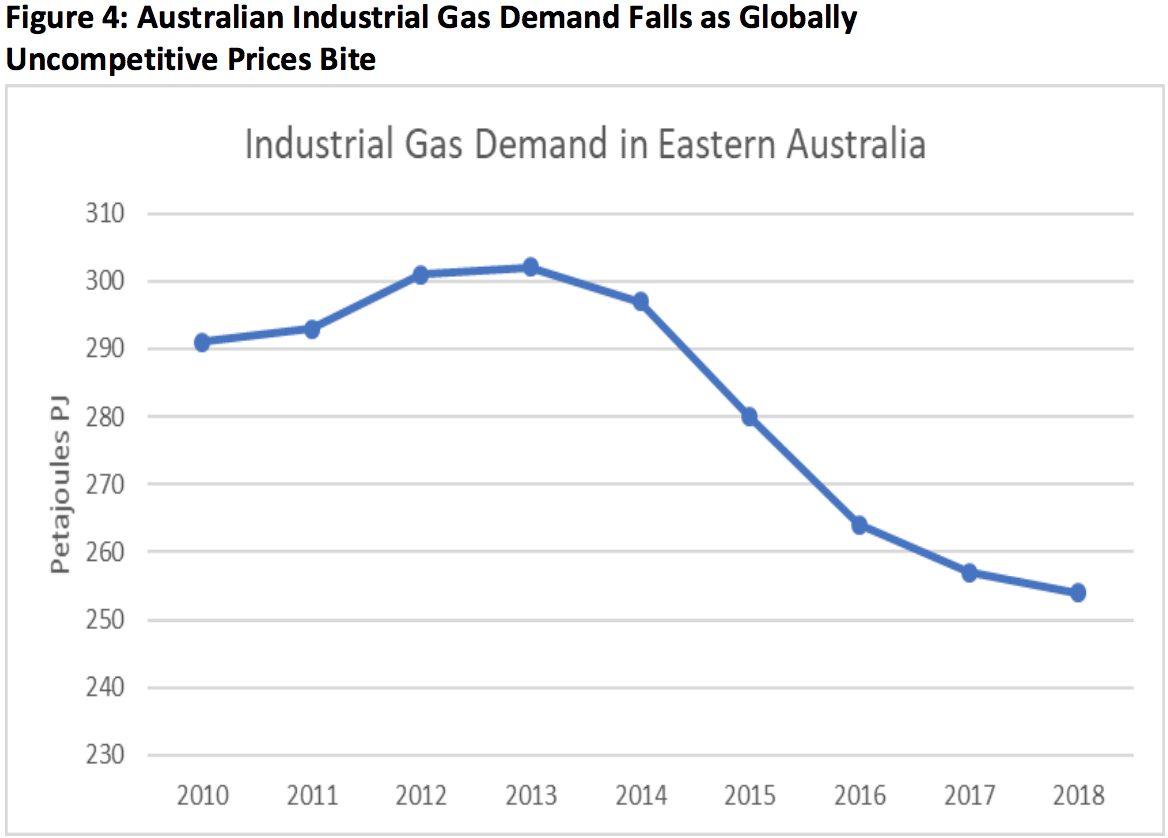 Yet somehow, despite the abundance of evidence that there is plenty of gas, and that a domestic reservation policy is sorely needed, those who are running the show in Australia are convinced we need to rip up valuable farmland in the southern states to avert a crisis which doesn’t exist. Here’s Matt Canavan:

“Minister for Resources and Northern Australia Matt Canavan said the GSOO report showed gas supplies would be adequate until 2023, but extra production from southern states would be critical for those jurisdictions to meet the demand of their own domestic and industrial users.

“The GSOO shows east coast gas supplies are sufficient to meet the needs of Australian homes and businesses over the short to medium term, but the long-term supply of affordable and reliable gas will rely on teamwork by all states and territories.

“AEMO’s forecast suggests that in a few years, southern production may decline sharply which will increase the dependence of gas users in Victoria and New South Wales on interstate supplies, particularly during the peak winter season.

“As a Government, we are working hard to create an environment where consumers have an affordable, reliable supply of gas.”

Bizarre. This despite the evidence that production in the Southern States is rising, not falling, out to 2022. The sad fact is that Australia is simply globally uncompetitive. Rampant domestic gas prices are destroying demand.

Note also that, beyond 2022, forecasts of production become very sketchy as no company gives a final investment decision on a project to start in five years time. Final investment decisions are always made closer to the present. Moreover, successive governments have allowed the gas industry, unlike in the US where prices are lower, to keep their resources and reserves secret. There is no standardised reporting, and yet they still have the cheek to call this a gas *market* when we don’t know who or what is on the “bid and offer”.

“I’ve a degree of sympathy for the manufacturers because this happened very quickly,” Mr Gallagher said. “We were all caught out by the speed at which the market changed on the east coast.

“But we do know supply will bring cost down; if there’s more supply coming into the market than demand that will drive down the marginal cost.”

He said, in particular, the development of the gas field at Narrabri in NSW would allow more domestic supply which would drive down costs in southern states.

The question has to be asked: How can producing high-cost gas bring the price down? Surely, it would push the price up, as has been the case already with Queensland’s onshore drilling.

Production costs at Gunnedah, where locals are rightly up in arms about Santos’s plans, are expected to be an eye-watering $7.40/GJ according to the AEMO Gas Statements of Opportunities (GSOO).

This is a project which has continually disappointed its owners in terms of gas produced in the exploration phase. It has tipped Santos and its partners into write offs of $1.8 billion to date (pre-tax). It’s a lemon and lemons are not in the habit of changing flavour.

Here is Rod Sims, Chairman of consumer watchdog the ACCC:

“Mr Sims said that wholesale gas prices should be $5.87 per gigajoule in Queensland and $7.77 in the southern states (due to the cost of piping the gas to those regions).”

AEMO does not agree. The southern states of NSW, Victoria and South Australia produce more than they consume and this surplus widens out to 2022. Yet the ACCC thinks that consumers in the southern states should have to pay to transport the gas from Queensland.

This must be galling for the consumers of gas in Melbourne who get their gas from the Bass Strait. Everything is calculated from the perspective of the powerful gas exporters, not from the standpoint of beleaguered customers.

“The ACCC is still barking up the wrong tree with export net-back prices too. We don’t want net-back to be the benchmark for a functional market. That is agreeing to pay virtually the same price for the gas as our Asian customers do. No other energy producer does that. We need to dislocate the local gas market entirely from international pricing.”

Well said. The gas lobby would appear to subscribe to the Big Lie precept propounded by Josef Goebbels:

“If you tell a lie big enough and keep repeating it, people will eventually come to believe it. The lie can be maintained only for such time as the State can shield the people from the political, economic and/or military consequences of the lie. It thus becomes vitally important for the State to use all of its powers to repress dissent, for the truth is the mortal enemy of the lie, and thus by extension, the truth is the greatest enemy of the State.”

It is time for the big gas lie to be exposed and for Australians to insist on access to what is already theirs, an abundance of gas, at what should be theirs, affordable prices. As we stand, just five corporations are making a killing at the expense of 26 million Australians. The Government has the levers set grossly in their favour.

Even more mortifying is that at least four of them (Exxon, BHP, Shell and Origin) have been investigated by the Tax Office for aggressive tax avoidance.

This artcle was published by Michael West on the 24th of July 2019.