Jobs growth in the retail and hospitality sectors has more than halved since the introduction of Sunday penalty rates, a new study has revealed.

Research by the Centre for Future Work (CFW) confirms that despite being premised on the expectation of increased hours and more jobs, the cuts to Sunday penalties, phased in since July 2017, have coincided with a worsening in jobs growth.

The findings come on the day that about 540,000 workers’ Sunday penalty rates are cut in the retail, hospitality, pharmacy and fast food sectors.

Using Australian Bureau of Statistics (ABS) data, CFW chief economist Dr Jim Stanford found that total employment in the retail sector – Australia’s second-largest employer with 1.3 million people – grew by 0.9 per cent a year in the two years from May 2017 to May 2019.

In the hospitality sector, jobs growth was 1.7 per cent a year for the two-year period.

Dr Stanford said both rates contrasted with the average annual labour market growth of 2.7 per cent over the same period.

“Therefore, both compared with other industries, and compared with previous periods of time, job creation in retail and hospitality under lower penalty rates has deteriorated,” Dr Stanford said.

Only a handful of sectors, such as the embattled finance and telco industries, had fared worse in the past two years, he found. 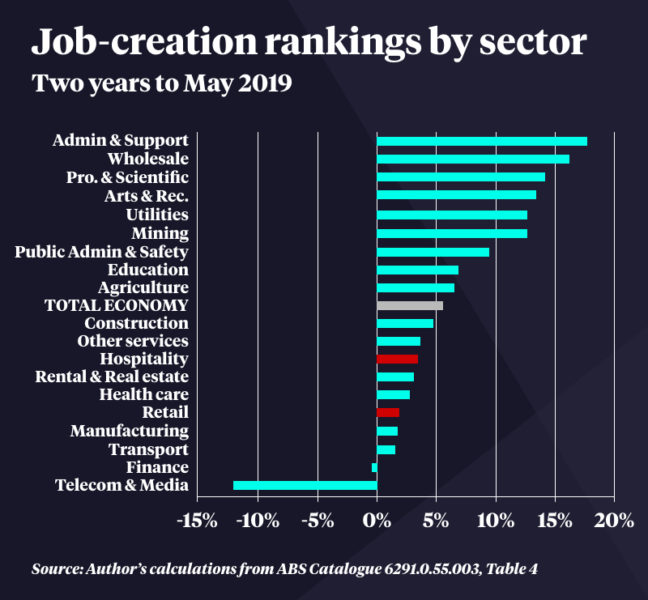 However, associate professor in economics at the University of Wollongong Martin O’Brien said using ABS data was inconclusive because it did not separately specify employment data for Sundays and public holidays.

The workers affected (those on modern award pay and conditions) comprise only about a third of employees in these sectors, with the remainder of workers on enterprise agreements (such as Coles, Bunnings, Woolworths or McDonalds), and individual contracts.

But together with Macquarie University employment relations professor Ray Markey, Professor O’Brien in 2018 surveyed more than 1800 employees and 200 owner-managers in retail and hospitality, looking specifically at Sunday, public holiday and weekly employment patterns. 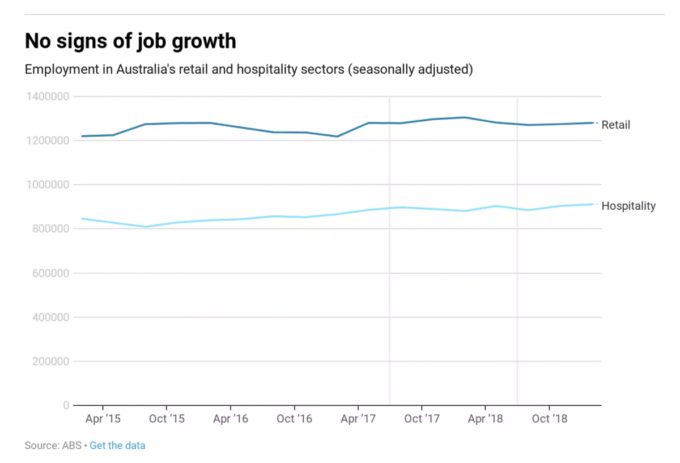 The graph produced by professors Markey and O’Brien.

The pair was “unable to establish any evidence of a relative increase in the prevalence of Sunday, public holiday or weekly employment for modern award employees or employers”.

“Nor could we establish a decrease to the number of hours that owner-managers worked Sunday and public holidays, something else the Fair Work Commission also predicted,” Professor O’Brien reported in The Conversation in May.

In fact, some of the analysis suggested the Sunday and public holiday employment outcomes were worse for those affected by the penalty cuts compared with those on enterprise agreements and individual contracts.

Professor O’Brien added that none of the academic papers cited by the Fair Work Commission in its decision to cut rates “contained sound empirical analysis of the employment impact of penalty rates”.

Give it time: Employer group

Meanwhile, Council of Small Business chief executive Peter Strong said any gains from the cuts for retail employers had been wiped by general wage increases of 3.3 per cent, 3.5 per cent and 3 per cent in 2017, 2018 and 2019.

Mr Strong argued the penalty rate cuts in 2017 and 2018, combined with general wage increases, actually led to an increase in costs for small businesses.

“No new reason to open the business on a Sunday or to employ people,” Mr Strong said. “This would be a similar story for cafes and restaurants.”

The New Daily contacted the Australian Chamber of Commerce and Industry (ACCI) but did not receive a response before deadline.

Reacting to Professor O’Brien’s work, ACCI CEO James Pearson said in May that the phasing in of the penalty rates from 2017 to 2020 meant it would take “time to see positive employment effects”.

“Very small sample sizes, for example interviewing less than 250 employers nationally, make this research unreliable, and the sentiments and behaviours outlined in the report cannot be assumed to be representative of Australia as a whole,” he said.