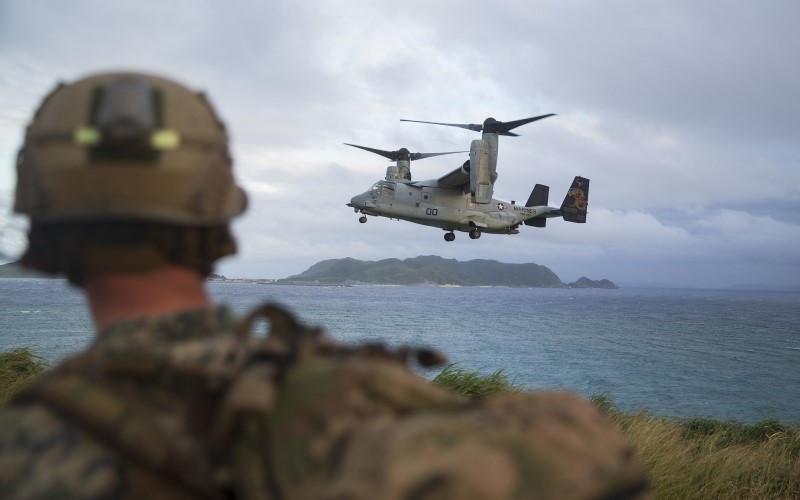 A US Marine watches over an operation in Okinawa, Japan. (Image: Flickr/US Indo-Pacific Command)

The construction of a US military base in the prefecture, driven by the national government, ignores strong opposition to the project among locals.

On January 23, incumbent Toguchi Taketoyo defeated contender Kishimoto Yohei in the election for mayor of Nago city in northern Okinawa. With a population of 61,000, Nago, about an hour’s drive north of the capital Naha, is not a particularly large or important city, but this election was of more than common importance. This was because the city is the site of a major military base being built by Japan for the US Marine Corps, and the contradictions of the Japanese state and the US-Japan relationship can be seen in their sharpest form there.

Marine Corps Air Station Futenma is one of about 800 US bases around the world, and in Okinawa such bases occupy about a quarter of the prefecture’s land and have done so since 1945.

Futenma sits on 480 hectares of prime land in the middle of Ginowan township, close to Naha. Since the cost of maintaining bases such as Futenma is mostly met by Japan, it is cheaper for the US to station forces there than on US soil.

In 1995, the bases arrangement in Okinawa was threatened by the abduction and rape of an Okinawan schoolgirl by three US servicemen. The promise of a return of some base land then seemed a concession necessary to defuse the wave of anger across the island over the crime and to preserve and reinforce US hegemony. In April 1996, Japanese prime minister Hashimoto Ryutaro and US ambassador Walter Mondale announced that Futenma base was to be returned to Japan “within five to seven years”. I well recall my astonishment at this news at the time. It seemed too good to be true, and so it was.

The return of Futenma would depend on the construction of a substitute facility in Okinawa, at a place called Henoko on Oura Bay, which is within Nago city. Initially described, coyly, as a “heliport”, the facility’s design has grown to include a monstrous dual 1800-metre runway structure protruding 10 metres above the surrounding sea, a deep sea port and an ordnance storage facility – overall far grander and more multifunctional than the troublesome Futenma it is supposedly replacing.

The Japanese government’s insistence on constructing the facility and the widespread opposition to it across Okinawa have been features of Japanese politics ever since. The only occasion on which Nago actually consented to the construction was in 1999. Then mayor Kishimoto Tateo, father of 2022 candidate Kishimoto Yohei, agreed to a highly restricted formula for a joint US-Japan facility (not a base) with a limited life span of 15 years and under strict environmental regulation. The only prefectural governor ever to consent, Nakaima Hirokazu in December 2013, did so inexplicably, reversing an electoral pledge and making clear his understanding that in return Futenma would cease operations and revert to Japan within 15 years, or by 2028. That time limit was never treated seriously.

Today, not only does Futenma remain but the best estimate now of a date for its reversion, and for the opening of the Henoko base, is about 2040 – 35 years after the “five to seven years” promised in 1998 and 12 years after the date agreed in 2013.

The 2022 election could not be considered a statement of Nago sentiment on the Henoko project because it pitted one candidate (Kishimoto), who took a resolutely anti-base stance, against another, Toguchi, who refused to express a view on the base. Toguchi’s election wins, in 2018 and this year, were the culmination of decades of national government cajolery, intimidation and deception. In declaring in 2022 that the base was a matter for the national and prefectural governments, Toguchi confined his campaign to the ”carrots” on offer from Tokyo regarding better services for the city – free childcare, school lunches, and medical care for children – and never conceded that these were the state’s “quid” for the city’s “quo” of silent co-operation on the base.

From the start, the national government has not taken seriously the various agreements on reversion seriously and Okinawans have learnt that it is not to be trusted. Their experience is of a Japan where democracy and human rights are routinely denied. What the national government strives to cultivate in Nago is not democratic citizen sovereignty but a mood of akirame or hopelessness. Why bother to vote when you know the government will pay no attention? The 68 per cent voting rate in 2022, the lowest on record, can be understood, at least partially, as an expression of that hopelessness.

In Tokyo the Toguchi victory was greeted by Liberal Democratic Party government as a green light for base reclamation and construction, but it is far from clear that the base will, or can, ever be completed. Not only is the site especially ill suited to any such large construction because of the soft ocean floor and the dual fault lines crossing the bay, but also because, despite the 2022 Nago election, the Okinawan opposition has made clear that it will persist in onsite protests and legal action. In 2021, when the national government asked prefectural governor Tamaki Denny to consent to a major redrawing of the reclamation and construction design, he bluntly refused. Okinawa, he said, would not co-operate.

Fifty years after Okinawa’s “reversion” from US to Japanese control, much of it, including Futenma, remains in US hands, increasingly subject to the agenda of preparation for war against China. If the Henoko base is completed, opening around 2040, it will mean that for decades to come Japan will be locked into subordination to the US to the east and hostility to its giant and indispensable neighbour to the west.

Such a Japan might become the world’s number 3 military power (if current plans to double military spending are carried forward) but that is unlikely to deliver it peace or security. Even as the Nago election campaign approached its climax, a US-Japan armada of 10 warships, including two US aircraft carriers and a Japanese helicopter destroyer, manoeuvred threateningly in the East China Sea between Okinawa and Taiwan. The prospect of conflict over Taiwan becomes ever more plausible, in which case Okinawa could expect devastation similar to what it suffered in 1945.

For about 500 years, between the 14th and 19th centuries, Okinawa, as the Ryukyu kingdom, enjoyed friendly relations with mainland Japan, China, and the kingdoms of South-East Asia. Demilitarised, it threatened no-one and faced no threat. Today too its security would be far better served by pursuing an agenda of regional disarmament and mutual co-operation rather than of US, or joint US-Japan, militarism.