Mischief, Disingenuousness and the ‘Doctrine of Ministerial Discretion’ by Bridget McKenzie. 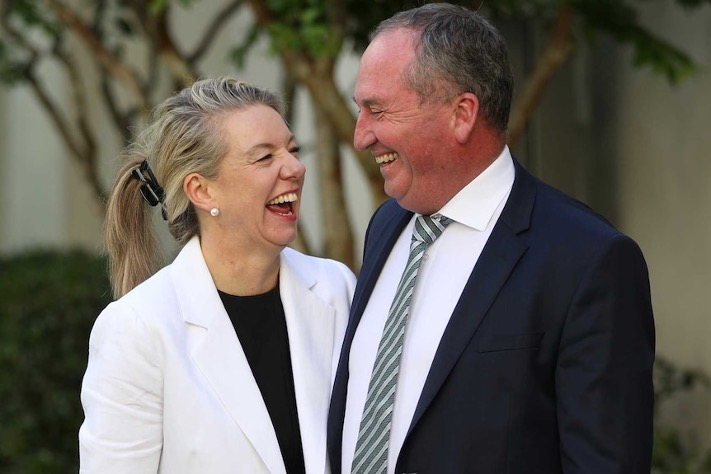 “Things are seldom what they seem/skim milk masquerades as cream/highlows pass as patent leathers/jackdaws strut in peacock’s feathers” is an even more appropriate description of what’s going on in the Morrison government than it was for HMS Pinafore.

During Senate Question Time on 3 August 2021, the Minister for Emergency Management and National Recovery and Resilience, Minister for Regionalisation, Regional Communications and Regional Education and Leader of The Nationals in the Senate, Senator Bridget McKenzie, announced a new and remarkable political invention.  It’s one she claims to be a feature of Westminster democracy, and absolutely key to how the Morrison government functions. It’s the Doctrine of Ministerial Discretion.

Her response to Senator Don Farrell is worth reading closely.

This is a clear case of Humpty Dumpty’s “When I use a word, it means just what I choose it to mean –  neither more nor less”.  It’s worth parsing her remarks a little.

First, it’s a feature of Westminster democracy. The exercise of discretion, which should be expected of Ministers, is not canonical. It is not a ‘doctrine’. And discretion certainly does not legitimise arbitrariness, discriminatory decision-making, favouritism or whimsy. And in the exercise of discretion, Ministers must be accountable to the Parliament. Ministerial accountability is a ‘doctrine’ in functioning Parliamentary democracies, though more honoured in the breach than in the observance these days.

Second, Ministerial discretion is ‘absolutely key’ to the functioning of the Morrison government. ‘Absolutely’ is the giveaway here: there is no accountability, no questioning, no need to be answerable or to give reasons. It is absolute. It is canonical. It is normative.

Third, ‘Ministers should take advice’. This is another example of weasel-wording in a mush of verbal blancmange. Here, the word ‘take’ means ‘receive’ rather than ‘accept’. Good Ministers, and Prime Ministers, know how to accept advice, even reluctantly. A story illustrates the point. In a tense situation in Kuala Lumpur in 1982, Prime Minister Fraser wanted to exercise his discretion by boycotting a state dinner hosted by Prime Minister Mahathir. The Departmental Secretary, Sir Geoffrey Yeend, said: “Prime Minister, you may do what you wish, because you are Prime Minister, but you cannot do that with my advice”. The Prime Minister attended the dinner. He ‘took’ advice, but not in the sense that Senator McKenzie would use the word.

Fourth, the idea that “my ministerial discretion . . . resulted in a fairer outcome” is ludicrous. To claim that arbitrary and politically discriminatory decisions, even when (mis)labelled as ‘exercises in Ministerial discretion’, deliver equity is mischievous. Such decisions certainly reallocate and redistribute taxpayers’ funds but in a thoroughly opaque and unaccountable manner. Nor does it represent any respect for the integrity and political non-alignment of the public servants who provide the advice.

. . .  Executive departments have been advised on numerous occasions by the Auditor-General, the Administrative Review Council and by Senate committees about the rules of parliamentary accountability and the powers of Senate committees to call for persons, papers and documents. It is for this reason that the Committee regrets having to repeat the fundamental principles of parliamentary accountability and to remind the immigration minister and her department that they are bound by these clear accountability requirements.

It would appear that, almost twenty years later, Ministers also need to be reminded of the fundamental place of Ministerial accountability in preserving a robust democracy.

In an important speech in 2017, Professor Gillian Triggs, former President of the Australian Human Rights Commission, warned of the overreach that might arise from the exercise of executive powers and Ministerial discretion, arguing that it was a threat to our democracy. She said:

My concern is that an imbalance has crept into our democracy so that increasingly the courts are marginalized by legislation. Compliant parliaments, including oppositions, over many years, have failed to exercise their historical restraint and pass laws that breach the rule of law. Executive cabinet government assumes ever more power. The result is that our democracy becomes weakened by the growing powers of the executive and by a corresponding diminution in the independence of the judiciary and a growing impotence of Parliament.

It is alarming that Senator McKenzie’s response to Senator Farrell is nothing more than a brazen attempt to legitimise the insidious expansion of Executive power with its attendant lack of accountability. ‘Ministerial discretion’ may seem innocuous enough, significant even, like ‘constitutional monarchy’, ‘separation of powers’ and, dare one say it, ‘Ministerial accountability’. But it is actually a sleight of hand, lulling the electorate into a false sense of confidence that the government’s processes are above board and entirely legitimate. They’re not.

The constant verbal sludge that surrounds the sports rorts, the car park rorts, the many missteps distinguishing the management of the coronavirus pandemic in Australia and the rollout of the vaccines we do not yet have, and now the total lack of ambition to address the warnings of the IPCC report is intended both to bamboozle and mislead. It’s high time that the government was called out on this.

Bring on the federal ICAC.