ABUL RIZVI. Morrison and Dutton wash their hands of the plight of overseas students?

Australia’s international education industry has boomed over the past 20 years. Now that it has all turned to tears, can Morrison and Dutton continue to wash their hands of the plight of overseas students they encouraged to come to Australia?

Australian governments have since the Colombo Plan of the 1950s wrestled with how best to manage policy on overseas students, including whether they should be allowed to extend stay after course completion and/or become permanent residents.

Overseas students have since the Chinese student arrivals of the late 1980s been at the core of Australian immigration policy challenges. Nevertheless, overseas students are also a primary reason Australia has the youngest population in the developed world. The benefits of that are often understated.

But with the coronavirus recession hitting overseas students and education institutions hard, there is no shortage ‘I told you so’ stories.

Not just from the usual anti-immigration suspects but also from university critics such as Janet Albrechtsen in The Australian in an article titled ‘Universities get lesson in risk, but will they learn’.

The ABC makes similar criticisms based on the views of Associate Professor Salvatore Babones who says universities were increasingly getting around English language requirements through use of so-called foundation courses.

Understandably, the various international education lobby groups argue the Government should do more to help universities that are now struggling. They do so without accepting any responsibility for the situation universities have put themselves into by increasingly recruiting students with limited English language skills and marginal ability to afford the fees and living expenses.

While the Commonwealth points to the legal requirement for students to have sufficient finances for the first 12 months of their visa, that ignores the fact the majority of students and temporary graduates have been in Australia more than 12 months. The argument also ignores the fact it was the Commonwealth that delegated responsibility for checking this requirements to many education providers.

The Commonwealth, as well as state/territory governments, have for years been happy to crow about their role in promoting growth of the industry; the number of people it employs; the range of businesses it supports; and the export income it earns. They were of course also happy with the additional income, property, payroll and GST revenue the industry put into their coffers.

But with over 600,000 current students and another 100,000 former students on temporary graduate visas now in deep trouble, only a few state/territory governments have been prepared to step up to provide students with some limited support.

The Commonwealth has been steadfast in its position – ‘go home’ it says with no thought to how difficult it is for students to get home; or to the Commonwealth’s own role in encouraging the students to come to Australia in the first place; or to the implications for the Australian international education industry’s post-crisis reputation.

Then there are the tens of thousands of Australian businesses and many more workers in our major capital cities whose livelihoods depend on delivering services to overseas students – grocery shops; coffee shops; cleaning businesses; clothes shops; bookstores; accommodation services; trades services.

So how did we get into this pickle?

The origins of the latest surge in overseas student numbers goes back to a 2012 review by former Olympics Minister Michael Knight and released by then Immigration Minister Chris Bowen.

Knight recommended increased delegation of responsibility to education providers for checking students’ English language skills and whether they had access to sufficient funds to live in Australia without excessive reliance on local employment. The number of education providers who would be delegated that responsibility progressively widened over the subsequent 5-6 years.

By using the 2014 Budget to lock-in a migration program of 190,000 per annum, former immigration minister Scott Morrison signalled a clear intention to accelerate growth of overseas student numbers who would subsequently be encouraged to apply for skilled migration. There was no other way the Government could keep delivering a migration program of that size and composition.

A more facilitative student visa policy, limited enforcement of visa compliance and with clear pathways to permanent residence led to rapid growth in the number of student visa holders in Australia (see Chart 1). 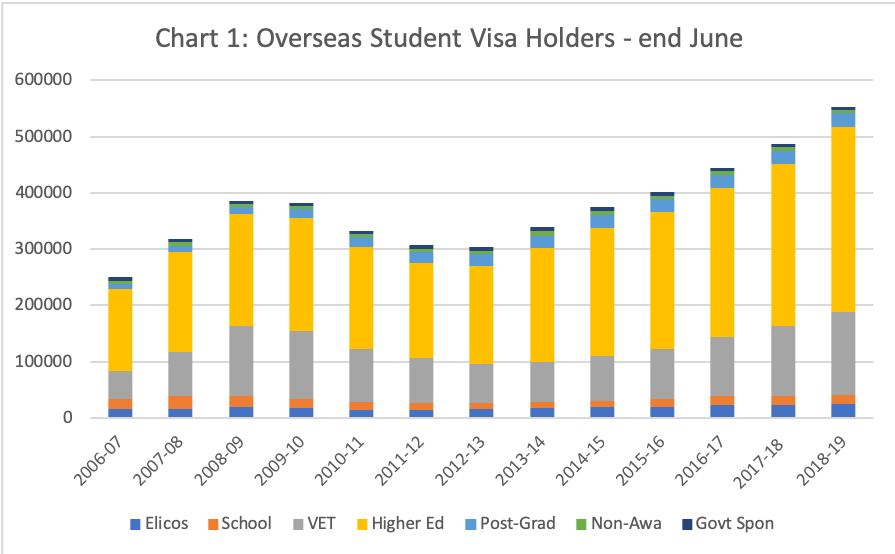 The most significant indicator of emerging problems from this policy approach was a surge in registration of private VET colleges from 2014 by the Australian Skills Quality Agency (ASQA). That was accompanied by a sharp rise in private VET colleges poaching students from universities, often on the basis of cheaper fees and lower course and English language requirements.

Private VET colleges have a long history of recruiting students from people already in Australia, usually on a higher education visa; undertaking a foundation course or on a working holiday.

From 2013-14 to 2018-19, the VET sector represented around 10 percent of all offshore visas issued while the higher education and post-graduate sectors represented around 60 percent of offshore student visas. Over the same period, the portion of onshore student visas issued to the VET sector increased from an already high 38 percent to over 44 percent.

It was not until well into 2018 that the alarm bells started to ring for ASQA which moved to significantly ramp up cancellation of VET college registrations and make new registrations much more difficult. By that stage, however, a very large number of overseas students had acquired questionable VET qualifications and had moved onto a temporary graduate visa.

Former Education Minister Simon Birmingham increased English language requirements for students moving from an English language or foundation course to a higher education or VET course but this appears to have had limited impact on student visa numbers.

While the Government had delayed action to tighten student visa requirements, it had much earlier started tightening pathways for students and temporary graduate visa holders to skilled temporary residence and permanent migration. That included reducing the size of the migration program.

In other words, the Government allowed student numbers to continue to build up while blocking many pathways to permanent residence. History shows that is the wrong way around.

Effectively, former students and temporary graduates now have only one viable path to permanent residence – nomination by a state/territory government. The design of those visas themselves have some serious problems that will further expose provisional visa holders to exploitation and abuse – something that is already at endemic levels.

With a very weak labour market, however, it is likely state/territory governments will wind back the number of people they nominate.

The final effect of all this is to leave a very large number of students and temporary graduates in immigration limbo and possible destitution. Most are now unable to access permanent residence; unable to get employment; and unable to get home.

Given the extensive role Scott Morrison, Peter Dutton, Simon Birmingham and other ministers have played in creating this situation, can they continue to wash their hands of the plight of overseas students and temporary graduates? 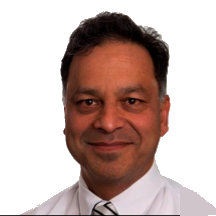